REVIEW: The Spy Who Tamed Me by Kelly Hunter 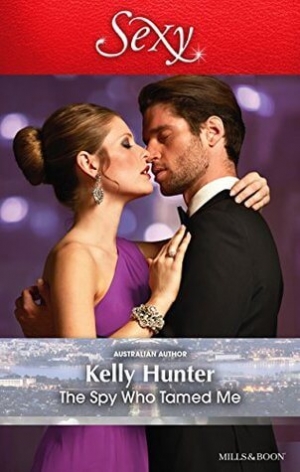 The Spy Who Tamed Me is the fourth and final book in your Wests series.  As it happens, I have the other three on Mt. TBR but haven’t managed to get to them yet. I think there are some aspects of the story which would have made more sense/been more enjoyable for me had I read the earlier books first and there are some spoilers – particular for Lena and Trig, but this book does work as a stand alone very well.

Jared West is the eldest of the wealthy West siblings. He is a spy for the Australian Secret Intelligence Service and has been deep undercover for two years. He resurfaces at the start of this book, injured, having escaped a burning boat, a beating and hot pursuit, in true James Bond (but nicer) fashion.  He made it, barely, to his sister Lena’s wedding but passed out shortly after. Rowan Farringdon is a section Director at ASIS and, because Jared’s director is unavailable, she steps in.

Rowan is a 40 year old career woman. She works 80+ hour weeks and doesn’t have much time for a social life or relationships. Her parents are career diplomats and she has a strained and distant relationship with them, having been basically raised by her military grandfather (who, delightfully, has a 50 year old tortoise named Veronica).  Rowan is at the top of her game and is headed for the top job in ASIS.  Then she meets Jared West.

Jared is 30, gorgeous, charming and, after years of deep cover work, seriously touch-starved.  Even so, when he meets Rowan he knows she is more to him than someone to scratch an itch.

Jared and Rowan flirt and banter with each other as he is treated, transported to ASIS headquarters in Canberra and then debriefed.  Jared is coy about the information he passes on – circumstances meant that he doesn’t yet have the final piece in the puzzle – the name of the mole high up in ASIS.  Rowan has her suspicions and agrees to let Jared go back in the field to glean the last piece of information.

Then there is the question of what he will do next – stay with ASIS? Or something else?

Rowan is very well put together – she’s comfortable in her skin and with her needs and desires. She is concerned about their age difference but a frank discussion takes care of any issues there – Jared wants Rowan and he will take her any way he can get her. He isn’t worried about her age, her job, whether or not she wants children – he just wants to be with her.

He curled his hands around her thighs once he’d finished exploring every dip of her back. He lifted her to his mouth and for a while she thought he might be a sex god. And then he released her, and then blanketed her again as he slid into her, slow and easy, and then she could have sworn he was a sex god.

Rowan finds in Jared a connection she hasn’t known before and in his family a level of kinship outside her experience. She is absorbed into the West clan with ease and she has a taste of a different kind of life.  Still, she is an ambitious and scarily competent woman.  I appreciated that Jared respected her expertise and her position. He was occasionally cocky but he knew when he was speaking to the Director and what that meant.

A cry for help calls Jared back into the field and, given he is doing this without the sanction (or knowledge) of ASIS, he necessarily has to keep it from her. This causes the relationship’s black moment and both protagonists have to examine themselves and their behaviour and make changes if they are to go forward together.

I loved the witty banter and the clear connection Rowan and Jared had. Jared is young but his work has made him older than his years and he came across to me as mature and a fitting match for Rowan. I probably could have done without the last little bit and the epilogue which, while it wrapped the series up nicely, felt a little to heteronormative. Up until then I had been enjoying the way Rowan and Jared had arranged things to suit her busy and important job.  That said, I also appreciated that Rowan made decisions that were right for her and the life she wanted and which utilised her talents as well.

The book is only about 130 pages, so it’s not a long read but it manages to convey all the necessarily ingredients for a really satisfying and entertaining romance.  I really must get to those earlier West books now…

Grade: B+ and a recommended read.

→ Kaetrin
Previous article: Monday News: The Power of Books
Next Post: Where Were You When…Part 2