REVIEW: The Siege Winter by Ariana Franklin and Samantha Norman 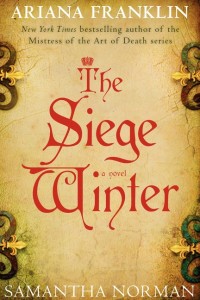 Like many readers, I was saddened to hear of Diana Norman’s passing in 2011. I’d enjoyed both her historical fiction The Vizard Mask and her medieval mystery series (written as Ariana Franklin) featuring Adelia Aguilar, an unusual 12th century heroine who is both a doctor and a medical examiner (the latter being unusual for anyone, male or female, in that era). When I heard that Norman would have one last book published, an unfinished manuscript to be completed by her daughter, Samantha Norman, I assumed it was another in the Adelia Aguilar series.

Actually, The Siege Winter is a stand-alone novel set in England in the 1100s, during the battle for the throne between Stephen and Matilda. The novel starts with a framing story, set in 1180; an elderly abbot on his deathbed relates a story to a young scribe at his abbey, one that he wants recorded for posterity.

The story follows a couple of groups of people who eventually come together later in the book. In the Cambridgeshire fens, a mercenary named Gwilherm de Vannes has lately been traveling with a very bad group of men (fighting on Stephen’s side), men whom he’s seen murder innocent monks, women and children recently at the plunder of Ely cathedral. Gwil figures his soul is damned, even if he did not participate in the atrocities. The entire countryside is so eaten up with the war between Stephen and Matilda that no one is safe. Gwil is almost relieved when his companions desert him, but they’ve stolen his horse and his crossbow, endangering his life and livelihood. The desertion occurs just as the worst of his companions, an unnamed monk, has abducted a little red-haired girl (the monk having a creepy fixation with red hair and a penchant for raping and murdering women). Gwil is helpless to do anything without his weapon, and so sets out on foot, looking for shelter with an eye towards the eventual goal recovering his crossbow and getting revenge.

Meanwhile, Maud of Kenniford, 16-year-old chatelaine of Kenniford Castle, is faced with an impossible choice. Her home has been invaded by men who have lately been fighting on Stephen’s side, and who are now compelling her to marry a 53-year-old brute named Sir John of Tewing in order to secure the castle for Stephen (the castle being well situated and thus a pivotal location to control in the war). Maud’s closest friends and advisers – her steward, her priest, her nurse and her cousin among them – are basically hostages whose very lives are in peril if Maud doesn’t comply. So she does.

Maud settles into married life as best she can; she steers clear of her husband and his creepy mistress Kigva and develops warm, stepmotherly feelings towards John’s son from his first marriage, William. William is a shy and gentle boy whose attempts to live up to his brutish father’s standards are doomed to failure.

Meanwhile, back in the fens, a wandering Gwil comes across the monk’s last victim, the little red-haired girl, brutalized and half-dead. He honestly wants nothing to do with her, but Gwil is a religious man; even though he believes he’s already condemned to hell for the things he’s done, he engages in reluctant dialogues with God which convince him to take responsibility for the girl he was unable to protect from rape and abuse. The girl is wary and half-feral at first; she cannot remember her name or who her people are, and she has no memory of what happened to her. But she knows it was bad, and she knows that she wants no part of being female. Gwil, seeing that traveling with a young boy might be safer all around, cuts her hair, renames her Penda (a male name, apparently), and presents her to the people they meet as his nephew.

Gwil also teaches Penda about being an arbalist (the term refers to both a special kind of medieval crossbow and the archer who wields it), giving her skills that will help Penda protect herself and earn a living if it comes to that. The two fall in with an acrobatic troupe, two men and a woman, and spend some time with them traveling from castle to castle and performing tricks for food and money. Gwil continues to hunt for his erstwhile companions; one hint he has is a small scroll of paper written in a foreign language that Penda took from the monk; he realizes the monk wants to get back. Gwil, who has come to care for Penda as his own child, wants not just revenge on the monk but safety for the child; he knows she won’t be safe unless the monk is dead. Further violence confirms his suspicion that while he’s hunting the monk, the monk is hunting him…and Penda.

Back at Kenniford Castle, Maud’s situation gets better, strangely, when Matilda’s forces take over in a mostly bloodless coup. She meets a handsome soldier, the leader of Matilda’s forces storming the castle, and her odious husband suffers a (sadly not fatal) stroke. So Maud is able to more or less regain control over the castle and its people, though her situation is of course precarious – Stephen’s forces could show up at any time and try to take the castle back.

The two plotlines come together when Gwil and Penda, taking refuge in a shack in the middle of a blizzard, encounter an unusual trio. The five end up traveling to Kenniford, where a couple of long-awaited confrontations begin brewing.

Characterization is probably the strongest part of The Siege Winter. Maud is an admirable heroine, raised to lead and appropriately autocratic to the times. (Still, it felt a bit anachronistic when, during her wedding, Maud is pissy during the vows: ‘“Wait, will you?” she snapped. “I’m thinking about it.”’)

Gwil is also quite noble, if reluctantly at times. There’s something appealing about a character who does the right thing, grudgingly – maybe because it just feels more relatable than those who do so with unfailing good cheer. Penda is a fierce little child; you see it in the glimpses we get of her even before her attack.

The background story of the battle between Stephen and Matilda was interesting enough, and the writing gave me a very good feel for the time and place – this was no medieval lite.

What didn’t work for me as well was the evil monk subplot. I can’t remember how many or which of the Adelia Aguilar books featured sexual violence, but I believe more than one did. At least those were mysteries, with a female protagonist; somehow the subject matter felt more organic there. Here, it felt vaguely titillating – not in a literal sexual way, but in an, “ooh, isn’t this sordid and exciting!” way. Particularly in passages (there are one or two) from the monk’s point of view. He’s not in any way an interesting or developed character – we never learn much about him, except that he smells of asafetida, which he takes for gas, and that he likes to torture, rape and murder women, especially red-haired women.

Ultimately, I felt like the story would have worked as well and been less squicky without the monk – I’m not even objecting to the rape, but to the creepy serial-killer with almost supernatural abilities; that was what felt unnecessary and exploitative.

I also wasn’t sure about the necessity of the framing story with the abbott and the scribe; it was one of those cases where I felt like I was supposed to wonder who the abbott was and where he fit into the story, but it was actually pretty obvious early on. I didn’t dislike the device, but it didn’t really add anything to the story.

Still, fine characterization and writing trump other complaints and quibbles. My final grade for The Siege Winter was a B+. Diana Norman’s talent will truly be missed.