REVIEW: The Shattering by Karen Healey

There are two things I continually look for in books: stories set places not in the U.S. and stories featuring diverse characters. While books do feature more of the above these days, I still think there’s room for improvement. One of the reasons why I’ve been reading more YA during the past couple years is because I’m having more luck hitting the diverse characters square, and occasionally the non-U.S. setting. Your second novel hit both for me. 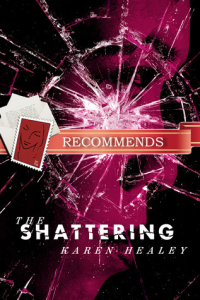 The Shattering introduces us to the New Zealand tourist town of Summerton. We’re introduced to Keri, a town local coping with the loss of her older brother. His suicide left a gaping hole in the family as they try to make sense of why he did it and why no one saw it coming. (He didn’t leave a note.) Then one day, Keri meets a childhood friend, Janna, who tells her that her brother’s suicide might not actually have been a suicide.

For the past ten years, at least one boy dies every year. They all fit a certain profile: all are older brothers, all were in Summerton during New Year’s, all die during midwinter, all were ruled suicides, and none left a note. While Keri’s not sure how the perpetrator did it, she’s willing to accept that they have a serial killer on their hands. Teaming up with Janna, whose older brother was the first boy to die, and Sione, whose older brother died last year, Keri begins the hunt for the murderer.

I really enjoyed this book. It’s been a while since I read a supernatural thriller/paranormal murder mystery, so maybe that’s part of why I was very receptive to this book. But the different elements worked for me. We have the multicultural town of Summerton. We have a cast of characters that span the gamut: white, biracial, Samoan, straight, gay, people with learning disorders, people with OCD. And the best part of all was that these identities overlapped. You don’t have The Gay Character or The Biracial Character or The Person with a Learning Disorder. The intersection of identities was something I really liked.

Keri and Janna were great female characters. I loved that Keri was an athlete (a rugby player). I loved that Janna was all about rock and roll, and that she was sexually confident. Even better, the narrative never demonized Janna for being a teenage girl who liked sex. At points in the story where she is criticized for that (by other characters), it’s presented as being bad.

I thought the portrayals of the relationships between the three main characters was well done. Keri and Janna were childhood friends who drifted apart but come together again because of this discovery. Janna and Sione hooked up last summer after Janna’s failed attempt to snag his older brother for a rebound fling. Janna fells guilty for what she did and has obviously moved on, but Sione still carries a torch for her. These portrayals were all fleshed out in realistic ways.

And in a genre where I constantly lament the missing parents trope, we had none of that here. I know the argument is that absent parents make it easier for the adolescent characters to carry the story without adult intervention. I’ve never believed that to be true, and The Shattering proves it. While the main characters’ parents weren’t always physically present, their influence was shown. Sione comes from a wealthy family so when he takes a vacation separate from his parents, they set a spy on him who reports his daily activities to them. Janna’s parents are divorced but they’re together for the holidays, which makes things at home awkward. And of course, because of Jake’s death, Keri’s mother has become even more protective and anxious about her daughter. So while no one’s parents took up significant page-time, the actions they took towards their children did have impact upon the plot while keeping the fate of the story firmly in the hands of the kids.

I won’t spoil it but the supernatural element is a familiar one to fantasy readers. The execution of that trope didn’t strike me as particularly original, so in some ways that was a letdown. But I thought the other elements of the novel more than made up for it.

I did correctly predict the ending twist, but I also think it’s one of those elements where it seems so obvious that it can’t possibly be true. A double fake out, so to speak. It’s just that in this case, it was true. Despite having correctly predicting what the revelation was going to be, it was still a punch to the gut. It hurt. That’s a compliment to the storytelling that I still felt that shock despite knowing it was going to happen.

As a result, I found the final chapter to be very graceful.

That would have been a good place to end the story. But the thing about life is that there’s only one ending to it. Mostly, life keeps going, and unless [spoiler redacted], you have to keep going, too.

It might not be the ending people expect but I thought it fitting and true to life.

In the end, this was a wonderful read. Sometimes I get stuck in a rut where nothing in a specific genre is working for me, and this knocked me right out. I thought the characters and the way they related to one another were wonderful, and their various reactions and emotions very resonant. All in all, this was a B+ for me and now I’m going to go hunt down your other novel, Guardian of the Dead.