REVIEW: The Road Ahead by Christabel Bielenberg 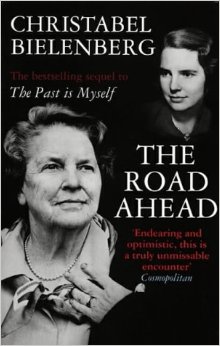 The beginning of the book covers the arrival of Allied/Russian troops in Germany and mention is made of rape. Also, later in the book, Christabel talks about an Uncle in England who, for reasons she never knew, disliked Jews.

Following her wartime memoirs in “The Past is Myself”, Christabel Bielenberg continues her story from the end of the war. Germany was devastated by war and its aftermath, while to the author Britain seemed grey and exhausted. She was soon appointed “The Observer”‘s special correspondent in Germany and, reunited with her husband – technically an enemy alien – she joined the struggle for reconciliation with, and the rebuilding of, a defeated nation. A near-fatal accident to her husband, and her own illness, persuaded the young couple to turn their backs on England and Germany, and make a new start farming in Ireland. Although life was harsh at first, the beautiful scenery of the Wicklow Mountains provided a haven for the family and for the hosts of young people from all over the world who joined them each summer. Christabel became involved with the Peace Women of Northern Ireland, and learned as much as she could about her adopted country.

Last month I reviewed the first book that Christabel Bielenberg wrote about her experiences as a wife and mother in wartime Germany, “The Past is Myself.” Once I got all my April and early May new books read and reviews written, I treated myself by going on to read this, her second book. It’s told in the same humorous style as her first book, manages to convey the tremendous bustle of her daily life and that of her family, doesn’t diverge from the main path of the story but is also deeply moving.

The story picks up right where “Past” left off with Chris, her German husband Peter and their three sons living in a small German village in the Black Forest where first Chris and the boys and then Peter – once he’d been released from Ravensbrück Prison Camp for his part in the July 20th, 1944 attempt on Hitler’s life – lived in the second half of the war. A few Russians had already been through there, had looted a little but then moved on. They were waiting for the other shoe to fall at the close of “Past.”

Well, the shoe not only fell but was then picked up and used to whack the villagers as the French auxiliary troops then arrived. Looting, rape, random destruction, more looting – chickens were a favorite – and more rape followed before the regular French Army arrived to occupy the area. Chris – who spoke French – worked out the magic words to say – “Yes, I have a big husband. He’s with the Commandant right now but is going to be back soon” – to keep the auxiliaries at bay and soon most of the women of the valley, along with their chickens, were taking refuge with her.

Chris boldly decides to seek out the Commandant in a neighboring town and gets from him a pass which allows her to travel at will – first on a bike and then by rickety car if she can find any gasoline. Eventually a British captain arrives in her village and the sight and sound of his and his drivers’ voices is enough to cause Chris to melt down in tears with shear relief. He then gives her an introductory letter along with the advice that nothing works miracles so fast in the Army as having a great big rubber stamp to make things look official. With these in hand, she and Peter are off to see his family in Hamburg and to seek work for Peter in post-war Frankfurt.

Meanwhile Chris’s family in England are hard at work getting her and the boys permission to come to England where Chris puts the boys in boarding school – or boring school as her middle son calls it. Chris temporarily becomes a correspondent in Germany for a British newspaper where she watches first hand the efforts to dig – literally in Berlin – the country out of the rubble. Lots of effort and red tape later, Peter can finally join them in England.

Before the war, Chris and Peter had briefly thought of moving to Ireland where Chris had relatives but ultimately they decided to stay in Germany and see if there was anything they or their friends could do to avert the war. Now having made the decision not to stay in post-war Germany, they looked once again to buying some farm land in Ireland and putting down roots – so to speak.

Chris’s description of her family, and her efforts to find a suitable farm that they could also afford is like something out of a comedic BBC TV series. I can see this being filmed. Seriously. Her trip in her aunt’s elderly car, which required a crank to start it, which had no floorboards in the back, a leaking roof on which her cousin had poured rubber cement which then leaked on her and the whole screeching to a halt and thus causing more rubber cement to slide forward and down the windscreen/shield all because a momma duck and ducklings waddled across the road had me in stitches.

Eventually a decrepit farm is bought and milk cows are purchased. It’s then that Chris discovers she’s not truly cut out to be a farmer’s wife but she gamely struggles on, even at one time turning a hand to being a ewe midwife. She and Peter, and the boys during school breaks, carry on, work hard and start to see progress. Chris also learns the history of their farm going back 1,000 years from the old retainer herder who’s lived there all his life. Eventually summer at the farm turns into a YA United Nations as friends, children of friends and various assorted strays come to live, perfect their English and harvest hay and barley for Peter’s contract with Guinness.

The years flow on and Chris ends the book with thoughts of her past and future as her large extended family and friends set up the celebration for her 70th birthday. The edition I have is a combination of both her books along with extra material including 1 extra chapter each that didn’t make the books plus some letters and diary entries Chris made during her time in Germany that her family found after her death. They also make compelling reading especially her chapter about her mother’s life which shows that Chris had a stellar model for the way to live a life She lived an amazing life, made a boatload of friends, influenced people for good and must have been a wonderful person to talk to. B+