REVIEW: The Revenge of Lord Eberlin by Julia London

I really enjoyed your latest novel, The Revenge of Lord Eberlin. Recently, thanks to the many thoughtful and well-written reviews here at Dear Author, I’ve been reading books out of what I think of as my comfort zone. And it’s been great. I loved Heat, disliked Beautiful Disaster, and am reading my first M/M romance. But my first love in romance is the historical and this entry into your The Secrets of Hadley Green series was a great reading date. It’s completely traditional, uses tropes common to historical romance, and even has an epilogue, a currently en vogue plot device I usually deplore. It’s set in one of those common and oft annoying British small towns full of judgmental old women and lavish estates kept running smoothly by a servant class completely satisfied with their lowered status in life. I loved it. 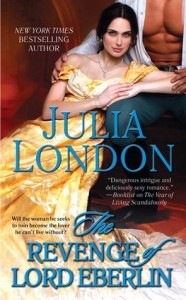 I’ve read the first book in the series, The Year of Living Scandalously, and thought it pretty good. That book begins when the heroine of this book, Lily Boudine, is eight. Lily, an orphan, lives with her uncle and aunt, at Ashwood, a palatial estate in the small West Sussex town of Hadley Green. It is the summer of 1793 and the night of the annual Ashwood gala. Lily sees two things that night that change the lives of many. The first is a couple whom she can’t quite make out embracing in the shadows on the stairs. The second, which she sees just a few minutes later, is a horse trotting away into the night. Lily recognizes the horse; it’s that of Mr. Scott, the woodcarver who has spent many an hour at Ashwood carving the detailed dual staircase that dominates the mansion’s main entry. She wonders why he would have been at Ashwood—the gala is for the Quality and Joseph Scott is certainly not that.

In the morning, Lily awakes to commotion. A dreadful theft has happened. Sometime during the night, someone pilfered the Ashwood jewels, a set of large priceless rubies given to the first Lord Ashwood by Edward the IV for the former’s loyalty during the War of the Roses. As Lily watches her beloved governess be questioned unsympathetically, she blurts out, “I think I know who took them.” She tells of seeing Mr. Scott riding away and, within days, Mr. Scott is hanged for the crime.

The Revenge of Lord Eberlin also begins in a summer, this one in 1808. For the first time in fifteen years, Tobin Scott, now 28, the eldest son of Joseph Scott, has returned to Hadley Green. The past years were harsh ones for the Scotts. His father’s execution destroyed his family; his mother and youngest brother died within a year of his father’s death, ruined by filth and poverty in the slums of London. Unable to provide for his younger sister Charity, Tobin took her to a church run poorhouse where she found work as a chamber maid. Tobin himself was impressed into service on a ship as a cook’s helper and, for ten years, sailed the world, never knowing whether or not his sister lived.

Tobin, though, like all heroes, is a survivor and now has all the trappings of success. He’s Lord Eberlin—he bought the title from a beleaguered Dane—and has unlimited wealth earned as an arms trader. He’s rescued Charity (and her illegitimate daughter) from a life of cleaning the refuse of others. He has everything he’s ever wanted except for the one thing he desires most: revenge on the house of Ashwood, currently headed by Lily Boudine.

I liked Tobin. He is, for much of the book, a complete and utter dick. He’s unethical, cold, manipulative, and cares little for the destruction he leaves in his wake. Even were he not seeking to ruin Ashwood, he’d still be a pitiless, bitter man. He is so damaged by his past he hasn’t the ability to feel or value joy, empathy, and compassion. He’s like the Grinch, but worse; rather than having a heart two sizes too small, Tobin hasn’t one at all. And yet, you make him exceedingly alluring. To begin with, he’s smart and interesting—his plans to destroy Ashwood are well-thought out and intricately planned. His complete lack of shame allows him to say whatever the hell he wants and much of what he says is great fun to read. He’s also sexy as hell.

When Tobin returns to Hadley Green, he buys and then pours oodles of his ill-gotten gains into building an estate to rival any in England. His home, Tiber Park, has every luxury imaginable. In contrast, Ashwood is on the brink of bankruptcy and Lily, though a countess, is sinking into poverty. In fact, Lily’s life pretty much sucks.

Lily’s childhood was, in general, a sad one. Her parents died when she was little, and although she was happy during the few years she spent at Ashwood, after she accused Tobin’s father, she was sent to Ireland and never again saw her beloved aunt, Lady Ashwood. While in Ireland, she lived with her cousins, one of whom, Keira, is the heroine of The Year of Living Scandalously. Kiera spent several months at Ashwood, prior to Lily’s arrival there, pretending to be Lily (this made sense—readers who wonder at this simply need to read the first book), and now the villagers of Hadley Green distrust Lily and, in general shun her. Her only close friend is a charming child, Lucy, who is leaving Lily for Ireland to live with Kiera and her husband. Lily is lonely, terrified she’ll fail all those who depend on Ashwood for their livelihoods, and helpless to stop Tobin’s ruination of all she has. I liked her as well. She too is smart; but where Tobin cares for nothing, Lily cares not only for those around her, but for herself. She longs for love, children, joy, and passion with a fervor that, given she has so little of those in her life, is heart-breaking.

When Lily realizes Lord Eberlin is actually Tobin, the boy with whom she played as a child and whose father was hung on her word, she is horrified to learn the tragedies her accusation caused. But she, sanely, sees what she did as a confused eight year old doesn’t give Tobin the right to annihilate either her or her home. She tells him his revenge is unfair and he tells her he doesn’t care, but, he’ll give her a chance at redemption. He’ll stop his ruination of Ashwood if she’ll let him completely ruin her.

“Shall I say it plainly?’ he murmured. “I propose to have your virtue… or I will have Ashwood. The choice is yours.”

But he is, to Lily, an arousing dick and she, after giving it some thought, agrees to his proposition. She, of course, hopes to somehow dally with him without giving up her virginity, but, you make it clear, from their first kiss, she will find that damned difficult to do. I loved the heat between Lily and Tobin. You make the desire they feel for one another palpable. This is a book that made my heart race and my skin tingle. You write wonderfully sensuous love scenes. Each time they touch, Lily, Tobin–and I–long for the two to become lovers.

In some ways, the expected happens. As Lily and Tobin spend time together, he slowly–very slowly–regains his humanity and his heart. He and Lily are hampered by the past and both work to free themselves–Lily from her guilt and Tobin from his black bitterness. When, by the book’s end, Tobin is again able to care and Lily is given the love she’s longed for, it’s lovely.

I don’t mean to imply, however, the book is without aspects unusual in historical romance. Unlike many small towns found in Regency romance, the people of Hadley Green aren’t especially likable. Many are petty, selfish, and annoying. They behaved horribly to Tobin’s family when his father hung and are nasty to Lily despite all her efforts on their behalf. Lily loves Lucy and suffers for that love. And, no matter what choice Lily and Tobin make, a match between the two will never be one that does anything but lower Lily in the eyes of her peers. Tobin never truly pays the piper for his sins and his sister, Charity, never finds peace. These deviations make the book stand out in a genre where saccharine convention is too often the norm.

The only part of the book I found lacking is the tale of those rubies. We are only two novels into the series; already, this plot line is wearing thin. This book offers little new or exciting information about the mysteries of the past. It’s clear Mr. Scott was not the thief and that someone, somewhere, has those damn jewels. Their whereabouts leaves me unconcerned and I’ve a hard time imagining an entire series built around their pursuit.

All in all, though, The Revenge of Lord Eberlin was a terrific read. I love a well-written, sexy, moving Regency romance and you, Ms. London, have written just that.  It’s almost perfect and thus, I give it a strong B+.