REVIEW: The Power of Habit: Why We Do What We Do in Life and Business by Charles Duhigg

This book came to my attention because it was included in the goodie bag Random House handed out at the Power Reader breakfast at BEA. Ordinarily the only non fiction works I read are about the law and those can be dry works. The Power of Habit is not. I listened to the audio book while on a week long business trip. 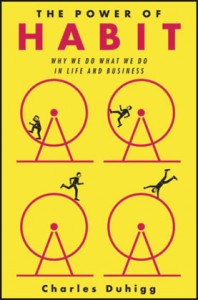 Duhigg drills down life to this. We are all habitual people and our lives are run by a series of mini routines which are triggered by a cue and end with a reward. Identify the trigger and you can detour to a different, more positive routine. The idea (and Duhigg backs this up by referncing scienctific studies of mice) is that old routines can never be obliterated but you can write over those negative routines by instituting a positive routine instead.

One of the examples Duhigg gives is by referencing the rise of Pepsodent toothpaste.  In the early 20th century, dental hygiene was so poor that the U.S. Army put it on The ad campaign developed by one of the most well known ad men in history, Claude C. Hopkins, began by identifying a cue or trigger. In this case it was a film across one’s teeth.  This film naturally builds up and is not unhealthy but Hopkins made it seem like something that needed to be removed.  Brushing teeth was the routine that Hopkins inserted and the reward was accidental. By including citric acid and mint oil, the person brushing their teeth received a physical reward – a tingling sensation in their mouths.  This obviously doesn’t have anything to do with making your teeth cleaner, but the physical sensation was a reward that people started to crave.  And thus a nation of toothbrushing people was born.  (You can read the excerpt of this section here).

There are keystone habits like exercise (hard) or just making one’s bed (easier) that can lead to positive outcomes all throughout the day from being more productive to spending less and earning more.

The book is not without its flaws. It discusses, for the most part, the power of positive habits and routines and only in the last few chapters discusses the negative habits such as gambling and other addictions. Power did refer to the sleep  terrors which, if you have read Bared to You, is an illness that Gideon suffers. When interviewing Sylvia Day about the book, Bared to You, I asked whether Gideon’s disease was real. She replied in the affirmative. The Power book takes it further and discusses the case of Brian Thomas who killed his wife while in his sleep believing her to be an intruder.   The prosecution ended up recommending that the jury return on not guilty verdict and Thomas was acquitted.  In Power of Habit, Duhigg suggests that a primal routine is triggered during one’s sleep terror.

Duhigg’s book and the principles therein are like Automator for your life. Set a trigger and the routine takes over. Tasks require less effort (not less work, but less effort) as they become more routine.

So as we become practiced in a task–essentially, as we learn–mental activity decreases. Studies in rats, for example, show that the brain’s basal ganglia stored habits while the rest of the brain took a nap.

I once read that oftentimes the hardest part of any task is actually starting it. For me that is absolutely true. Once I’ve started a task, I can usually force myself to complete it. Or I cannot continue to the next task without completing it.  In Julie Garwood’s The Bride, the heroine wants to make changes to her new home in Scotland. The clan’s priest looks on with skepticisim. The hero, a dainty lady, asks the priest if he believes she could eat an entire bear. He replies no. She says that she could, one bite at a time.

The book touches on the issue of familiarity and success of music which I think can easily be extrapolated to books.  The example used by Duhigg is the success of Hey Ya by Outkast.

Everyone believed it was a hit.  Executives at Arista had begun singing to each other the line “shake it a Polaroid picture.”  Unfortunately it didn’t catch on with the public.  It was so different than what was playing at the time, so unfamiliar, the listeners would reject it within the first few bars.  The record executives got the radio DJs to play Hey Ya between songs that listeners were familiar with. Listeners would expect to hear song B after listening to Song A and then Hey Ya.  Eventually Hey Ya took hold and became the hit that everyone expected it would be.

This explains, in large part, why “If You Like” shelf talkers and lists are helpful in selling books. Why publishers chase the next Twilight, Hunger Games, and Fifty Shades. Because readers are looking for familiar tropes with the same reward.  It explains why category lines developed by Harlequin are so successful and why it is so difficult to introduce change or something new.

In some ways, publishers try to emulate the sandwich technique with anthologies but they aren’t doing it quite as scientifically.  In other words, if I was packaging books at a bookstore, I would stick Meljean Brook’s The Iron Duke (a book that sells okay) in between two of Kresley Cole’s paranormals. Those books all have the same, familiar storyline.  A possessive, jealous hero that pursues the heroine even when it seems she has no interest.  The sandwiching of the new, unexpected storyline (steampunk) still can deliver the familiar emotional end result and thereby elevating a hard to market story that should be a hit.

Duhigg’s book focuses on the corporate success of Alcoa, Starbucks, and P&G’s Febreeze. Alcoa, in particular, was a fascinating subject. The criticism I’ve read of Duhigg’s book is valid – it is very pro routine, with very little analysis of either the ethical behavior of companies like Target’s data mining or the downside of the habit cycle. The other thing Duhigg doesn’t consider is how individuals respond differently to imeptus. Not everyone is list oriented or goal oriented. Finally, it does not help a person identify the most important thing in changing one’s habits which is identifying the cue or trigger. Nonetheless, I thought this book provided some amazing insight on how good habits or bad habits can be created, refined, and extended.  B+