Recently The Famous Heroine and The Plumed Bonnet were rereleased together in a 2-in-1 edition after many years out of print, and I reviewed and recommended The Famous Heroine. That book left me wanting to know more about Alistair, Duke of Bridgewater, one of the hero’s friends. 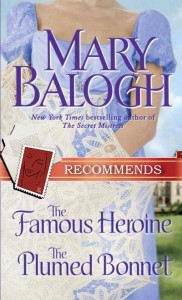 In The Famous Heroine Alistair, having seen three of his friends trapped into marriage or married under false pretenses, determines to avoid the parson’s mousetrap. The Plumed Bonnet begins several years later, and Alistair is on his way to London for the season.

Along the road Alistair spies a “bird of paradise” in a fuchsia cloak and a plumed pink bonnet. The lady, who is surely no lady, begs for a ride atop the carriage with the groom and coachman. She is trying to reach Hampshire on foot. Alistair, bored with his mistresses and with his loveless life, decides that she might as well ride inside the carriage and entertain him.

And indeed the tall tale she feeds him is immensely amusing. According to the brightly plumed bird, her name is Stephanie Gray and she is a governess who recently came into a considerable fortune. Sindon Park, the estate that belonged to her grandfather, was left to Stephanie though she and her parents were estranged from the rest of the family. The will stipulates that Stephanie must marry within four months to a man of whom the solicitor and her grandfather’s nephew approve, or lose Sindon Park.

Since her employers were unkind and she could not have borne for them to turn obsequious, Stephanie left her workplace early one morning without giving notice in order to make her way to Hampshire and claim her inheritance. On Stephanie’s way there her valise was stolen, and unfortunately most of her money was in it. Now Stephanie is penniless and at Alistair’s mercy, as well as grateful for his kindness. If only she could repay him!

Alistair, who introduces himself only as Alistair Munro and allows Stephanie to assume he is a mere mister, is thoroughly entertained and strangely attracted to the woman whose tale he cannot swallow. He can think of a way that she can repay him, and resolves to take her all the way to Hampshire, providing her with food and shelter along the way, in order to see her squirm when her lies are disproved. Afterward, he will take her to London and set her up as his mistress.

But Stephanie’s outlandish tale happens to be true. She came by the cloak and bonnet from a troupe of actors traveling in the opposite direction, and took them because she had no other bonnet and cloak – hers had been stolen along with her valise and money. Stephanie has just one coin left and Hampshire is distant. She is hungry, cold, and after spending the night out of doors she knows she will not survive without a ride.

Stephanie is beyond grateful to Alistair, the only person who has treated her with kindness and respect, rather than leering or revulsion. When they reach Hampshire, she tells him that if it comes out that she spent days in his company unchaperoned, she will surely be considered compromised. She asks him to set her down to walk to Sindon Park, so that he will not be trapped into marrying her, but Alistair insists that for her own safety, he must see her to the door.

Of course, once there, Alistair realizes that Stephanie is exactly what she said she was and he has sprung the parson’s mousetrap on himself. He is not required to marry her, but she will likely be ruined unless he does. Honor dictates he offer himself, and reveal that he is really a duke….

The Plumed Bonnet is a story of misleading appearances, personal insecurities, and misunderstandings. Even after the initial misapprehension caused by the plumed bonnet is cleared up, there are others to sort out. Stephanie and Alistair are at first unsure that their betrothal isn’t a mistake, that Stephanie is cut out for the role of duchess, and most importantly, what it is they want from a spouse.

Part of the problem is that Stephanie, who would have died on the road to Hampshire if Alistair hadn’t stopped to pick her up, feels so indebted to Alistair for his generosity and kindness, and for treating her with respect when no one else would. Her indebtedness makes the relationship between them unequal, so it’s not until the truth of Alistair’s motivations comes out that they can begin to forge a partnership.

The book also explores a theme that was prominent in one of your most beloved books, Slightly Dangerous, that of a conflict between propriety and free spirits. In fact, once Alistair’s past was revealed, I saw some similarities between him and Wulfric, Duke of Bewcastle, the hero of Slightly Dangerous.

I was impressed that Alistair was in no way diminished by this comparison, and in fact, he is one of your best heroes IMO. Even when he mistook Stephanie for an actress or a kept woman, he still treated her better than anyone else did, and although he initially told himself he was marrying her for honor’s sake, the truth was more complex. In the last quarter of the book, Alistair makes a couple of very romantic gestures that made me sigh with satisfaction.

As for Stephanie, while I was totally on her side at the beginning of the book, in the middle section I felt she was a bit too prickly. While Alistair made one or two blunders, they didn’t seem like enough to merit Stephanie’s coldness. But I also understood why Stephanie’s feelings of indebtedness and the attempts on Alistair’s mother’s behalf to mold her into a duchess made her feel resentful.

The exploration of the way gratitude can actually create a negative dynamic was unusual and interesting, and I appreciated that there were no true villains in the story, just human beings who made mistakes and came to regret them.

A significant flaw in the book was that while the beginning and ending were riveting, the middle didn’t create the same level of suspense in me. Still, the last quarter (but for a jarring note in the final scene) was so romantic that I closed the book feeling happy and contented. B+.