REVIEW: The Moonspinners by Mary Stewart

Young, beautiful, and adventurous Nicola Ferris loves her life as a secretary at the British Embassy on Greece. On leave from her job as a secretary in Athens, has been looking forward to a quiet week’s holiday in the lush island of Crete, enjoying the wild flowers and the company of her cousin Frances. Then on her day off, her impulse led her on a little-used path into the foreboding White Mountains. She links up with two hiking companions who have inadvertently stumbled upon a scene of blood vengeance, that involving a young Englishman and a group of people tied together by blood and the bonds of greed.

For the first time in her life Nicola meets a man and a situation she cannot deal with… A man in hiding — for reasons he could not explain. Warned to stay away, Nicola was unable to obey. And before she realized what she had uncovered, she found herself thrust into the midst of an alarming plot in which she would become the prey… And suddenly the life Nicola adores is in danger of coming to an abrupt, brutal, and terrifying end….

As with many Stewart books, this one starts off innocently enough with young Nicola happily on her way to a vacation amide the Cretan countryside. Descriptions of the lovely landscape lead her quietly on her way to destiny which meets up with her, in an almost quiet and tranquil way, before she realizes what she’s got into.

Very quickly, Nicola turns from a happy tourist on holiday into that amazing creature, the managing Englishwoman. Once she gets a head of steam going she’s formidable enough to get not one but two young men to do her bidding even though both initially balk at any involvement on her part.

Nicola is a sensible young woman – she immediately realizes that whatever Mark and Lambis have got themselves into, it’s deeper than she wants to go and sensibly tries to back out once she’s done her bit and helped save Mark’s life – twice. But it’s her innate sense of of decency that won’t allow her to let go of the situation and causes her to stick her oar in where she can see it’s needed and she can actually do more good than harm.

The story is a wonderful mix of carefree and tension which all turns on a dime. I’m glad to see Nicola actually doing something productive, saving Mark the first day by moving him, saving him again by diversion in the village and then putting all the clues together for the ultimate find. The group conference after that does get a bit “boy’s own adventure” esque. But at least Nicola takes full part in it.

I did wonder at the fact that the murderers would have done the initial deed and shot at Mark then hesitated on the rest. It doesn’t add up even if it gives the happy ending needed. But then Stewart seldom kills off characters with an exception I can remember in “Nine Coaches Waiting.”

Frances is a doll and not to be messed with either. What is the difference between a proper lunch and the “thumping good” one she orders from Tony? Perhaps our English readers could chime in here. She truly is a dear with her “your Mark” to Nicola, comments on Tony from London as Little Lord Fauntleroy and efforts with a rock to even the odds during the pitched water battle. Am I the only one who reads Tony as a bit of Roddy McDowall?

The way the crooks catch on to what Nicola and Co know is, again thankfully in a Stewart novel, not due to incompetence on her part but rather just an unfortunate oversight. Nicola isn’t made to be momentarily dense just to get the plot where it needs to go. 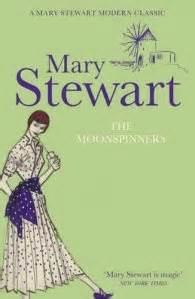 I have to repeat that the English are just so managing here. Even when Frances goes down for the count with her gimpy ankle, she’s still muttering orders and soothing things over. She and Nicola are pluck to the backbone and not ones to let any foreign types get away with any such nasty things as murder or kidnapping. All alone in a Cretan village? Fleeing from villains in the middle of the night? Staggering along under the weight of suitcases along a rocky coastline? Lost the easy means of contacting the rescuers? Never fear and “press on regardless.” I also love that while Nicola dashes on with her heroic attempt to contact Mark, she keeps demurring that it isn’t heroic at all. Just necessary, damn it but not heroic at all. One just does what must be done and passes it off as a way to cool down after a sticky walk.

But heroics are exactly what Nicola does as she is thrust into a fight for her life in a way unique to the story. I’ll try not to spoil it but I’ve never before or since read anything like this desperate escape from death. Mary Stewart had a knack for not only making the final, heart stopping climax of the book gripping and suspenseful but also making it a one of a kind to the book setting and characters.

Stewart’s heroes are usually the strong, quiet types who refrain from excess emotion until pushed to the edge and then they nobly step up and go far beyond uttering sharp words straight to, in this case, “surging” into the fray to defend and protect their heroine. Mark is no exception to the rule and hurls himself right at the danger – along with his backup squad, some patio furniture and a pot of carnations. I still love it, though, that Nicola plays the final card in catching the main villain. Very neatly too.

Stewart does marvelous visuals. And it’s not only the landscape that springs up before you but the heat, if it’s hot, or damp, if it’s wet, or wind or the noble procession of every boat from the Cretan village out to rescue Frances stuck on a rock like Andromeda. I also love that Colin’s schoolboy Greek actually came in useful for him!

There’s also such a down-to-earth feel about the story. Mark and Nicola meet, spend the night in shared warmth and then – wait, there’s no great bolt of lightning romance that quickly follows. Instead he looks like “a rather badly off tramp” and she thinks she probably looks like “pretty suitable mate for him.” No instalurve with perfect morning breath here. I do like that she let’s Mark verbally have it when he defends not telling her a few things. By gosh yes she is involved and up to her eyelids and he better appreciate it. And by gosh he does. And acknowledges her share in saving the day and catching the crook.

The book is period as I doubt there are enough isolated Greek islands now to allow for English vacationers to escape their fellow day trippers as Frances and Nicola tried to do. And today would a young woman traipse about the countryside, clambering over rocks, while wearing a frock? She also has memories of the blackout during the war to compare to their hurried flight from danger in the end. But I love the early 1960s feel that this was an out of the way place, steeped in time, with a people proud of their heritage and that the Moonspinners truly do look out for Our Intrepid Heroes on their missions during the course of the book – making the night safe for the hunted. B+