REVIEW: The Mischief of the Mistletoe by Lauren Willig

I admit I haven’t read the latest in the “Pink Carnation” series “Blood Lily” so when Jane sent me the arc for “The Mischief of the Mistletoe” I inwardly cringed. Oh dear, I thought, there’s no way I can get “Lily” read in time so I’ll just have to plunge in and hope there are no spoilers. To my relief, “Mischief” takes place before “Lily” does and features a hero I’ve wanted to see find his true love: Turnip Fitzhugh. 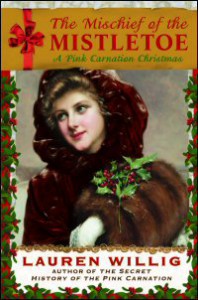 Miss Arabella Dempsey has almost managed to convince herself that becoming a junior instructress at Miss Climpson’s Select Seminary for Young Ladies is a good thing. Since her hopes of being adopted as her wealthy aunt’s heiress have been dashed by that lady’s precipitous marriage to a much younger man, a man for whom Arabella entertained hopes of her own, she’s returned home to her ailing former vicar father’s household to join her three younger sisters. With little money and the family bursting at the household seams, leaving home and earning some money will help everyone.

She doesn’t expect to meet Mr. Reginald Fitzhugh – known to the ton and his friends as “Turnip” – while he’s delivering a Christmas hamper to his younger sister – and student at the school – Sally. He doesn’t remember her name but then she made a career of being a wallflower while in London with her aunt.

What brings them together is the mysterious note – in French – found wrapped around a Christmas pudding. Turnip might not actually be in the league of the Pink Carnation but he’s had enough exposure to it and to French spies that even he thinks something is fishy in the state of Denmark. Will Arabella and Turnip uncover the truth behind the pudding – and the missing list of government agents – before they discover love during the Ducal celebrations at Dovedale – or after?

There’s something deeply satisfying to me about the overlooked finding their perfect mate – in this case the wallflower who decides to stop being so agreeable, since it got her nowhere, and the genial class clown who will never be mistaken for the brains of the operation. Honestly it’s such a relief to have a hero like Turnip. He is what he is and as Arabella fondly thinks, she’ll always know what’s on his mind because she – and everybody else – can read him so well.

Turnip isn’t a rake, a rogue or a fop – though he is something of a dandy with his carnation embroidered waistcoats and excessive cravats. Instead he’s a gentleman to the core who might take a bit longer to catch on to things but once it’s gotten into his noggin, it doesn’t come out. Arabella is the one who notices the kind things he does for people, the happy soul he is and she treasures him for it. He’s so earnest and wants to do right, including being Arabella’s knight in shining armor. Gotta love a hero like that.

Meanwhile, Turnip sees the real Arabella. The one who’s enjoying being out on her own and being of worth. The one who has such a zest for dancing and who doesn’t lose her head when spies enter her world. He’s the one who is amazed that no man up til now – and that includes him – has seen her light and fallen in love with her. But he certainly knows how to make up for lost time with the grand gesture in front of everyone who overlooked her and a keen aim with a Christmas pudding.

The spy stuff is woven through the love story and all comes together in the end. The clues are there should readers want to figure out who-plans-to-do-it but the bulk of the book is devoted to Turnip and Arabella finding each other with the solving of the traitor bit as a backdrop. I also liked the break from the modern element of the Pink Carnation series though there is anachronistic modern sounding dialogue. But I was having such fun reading the book that I really don’t care about that. Oh and I’m glad to hear that you have future plans for Sally and her band of intrepid fellow students. They are a force of nature.

Righto, now that I’ve finished this one, I need to get cracking with “Blood Lily.” Perhaps the release for “Mistletoe” is a bit early for Christmas, but one can never get started on one’s Christmas events too soon I say. B+