REVIEW: The Magpie Lord (A Charm of Magpies 1) by KJ Charles

A lord in danger. A magician in turmoil. A snowball in hell.

Exiled to China for twenty years, Lucien Vaudrey never planned to return to England. But with the mysterious deaths of his father and brother, it seems the new Lord Crane has inherited an earldom. He’s also inherited his family’s enemies. He needs magical assistance, fast. He doesn’t expect it to turn up angry.

Magician Stephen Day has good reason to hate Crane’s family. Unfortunately, it’s his job to deal with supernatural threats. Besides, the earl is unlike any aristocrat he’s ever met, with the tattoos, the attitude…and the way Crane seems determined to get him into bed. That’s definitely unusual.

Soon Stephen is falling hard for the worst possible man, at the worst possible time. But Crane’s dangerous appeal isn’t the only thing rendering Stephen powerless. Evil pervades the house, a web of plots is closing round Crane, and if Stephen can’t find a way through it—they’re both going to die.

Warning: Contains hot m/m sex between a deeply inappropriate earl and a very confused magician, dark plots in a magical version of Victorian England, family values (not the good kind), and a lot of swearing.

The blurb of this book appealed to me – I love when magic of any kind is part of the setting (if it is well done of course – same as with any setting).  I also love when magic is combined with a mystery, and when there is a romance building on the top of that, I can be a very happy reader if I am pleased with the execution.

This book was a wonderful surprise. I had never heard of this writer before, but I will certainly be on the lookout for more books from her. It looks like the second book in this series will be out in January 2014, but I do not know if more books are planned in this series beyond that. 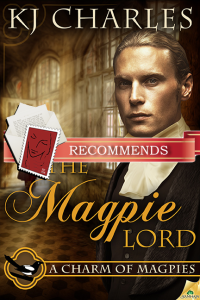 The story is set in a Victorian England where the magic is part of everybody’s everyday lives. Not everything is revealed yet as to how this world works, but even in this book I did not feel disoriented in time and place, if that makes sense. I felt that my feet were firmly on the ground and this is how I want to feel when the writer throws me into a world which is at least partially of her own invention

Let me tell you a little bit more about the set-up of the book.  The blurb is a nice teaser, but it does not tell you why Lucien needs magical help. Basically, somebody has already tried very hard to murder him, or more precisely to induce him to commit suicide by magical means. It became more and more difficult for his trusted servant, Merrick, to stop him, and both he and Lucien are afraid that next time the attack will succeed and Lucien will die. So they ask for help from a shaman, at which point Stephen appears on their doorstep.  He was a magical practitioner and more than competent for that job, but whether he was a shaman or not I am actually not sure yet.  He is able to figure out what was is to make Lucien kill himself, but then he realizes that something bigger is at work and the three must travel to the Cranes’ ancestral home and confront these forces.

The pacing of the story was impressive to me.  The first couple of chapters threw me right into the middle of danger Lucien faces and I never felt that the story dragged, not once. But the writer let me take couple of breaths with the main characters, if that makes sense, in between all of that danger. I thought she achieved a very nice balance with that.

I loved both characters almost from the get- go – as you can tell from the blurb, Lucien did not have the best relationship with his family (to put it mildly: otherwise he would not have been forced to go to China). The best way to describe Lucien is that he is a survivor. The hardships that he and Merrick encountered while in China are only briefly mentioned in this book (hopefully we will learn more later), and the fact that they survived and even thrived was very impressive to me. But now when both his horrible father and even worse brother are dead, Lucien is back in England dealing with the title he inherited and the mess they left behind.

Stephen was also a great character. I am actually not a big fan of the setup where the two main characters in an m/m story are very different in size, but only because in so very many stories that difference in sizes signals that the smaller character is a damsel in distress. If this is not the case, I really do not care about what size the guys are, different, same, etc.  And in this story Stephen did not remind me a damsel of any kind. Quite the contrary, because the magical threat to Lucien’s life looms over them for the majority of the story, Lucien has to depend on Stephen’s skills and Stephen seemed to me to be a *very* gifted, very strong magician, who dealt with the danger and excitement very well. Not that he was omnipotent, as Stephen himself said at least once, and it took all of them to deal with the final danger, but I thought he did more than ok. I do not want to imply that Lucien was the damsel in distress either, he was an extremely strong character, but I liked that he had to let Stephen take the lead several times no matter how much he would have preferred not to.

“I’m all right,” he said, muffled.  “I’m all right. Get off me, you lump.”
“Don’t,” Day said from the end of the room. “Keep him down.”
Crane angled his neck uncomfortably. Day was also on the floor, kneeling by the fireplace. His left hand was held right, just above the  floor,  its fingers contorted into splayed claws. Under it was something Crane could not quite see. Day had the abstracted look again, his lips were slightly drawn back from his teeth, and from where Crane lay, his eyes seemed to be pure darkness with a ring of white.
“Let me up,” Crane snapped.
“Don’t let him up,” Day repeated. “Don’t let him move. Break his arms if you have to.”
“Day—“
“I’m having a certain amount of trouble holding this thing.” Day’s voice had a slight tremor of tension to it. “And I need it held, but the nodes… I’m making this too complicated. This is craft. Wood,  blood and birdspit. Where’s my bag?”

If you are wondering about the actual romance, do not worry.  The romance builds throughout the book, but no, they do not end up in bed until the end of the story. As the blurb indicates Stephen has a bad history with Lucien’s family, and even though he figures out very quickly that Lucien is not like his family, this makes him understandably mistrustful and averse to sleeping with Lucien right away. Several times during the story they end up almost having sex, but not quite, and I thought the reasons made perfect sense. I also really liked how author used those “almost” times to build and build the sexual tension between them until it exploded at the end, and at the same time made sure not to make a mockery out of the investigation and showed that investigation was their first priority no matter how attracted they were to each other.

I liked couple of female characters we meet in the village, but I am especially looking forward to meeting Stephen’s work partner Esther. I have a suspicion her magical skills are also very good.

Oh and magpies are indeed important part of the story!  Grade B+.