I’m so glad that by the time I’d heard of these books, the second one was already out and the third one wasn’t too much of a wait. In Little Darlin’ you make me actually like a secret baby book and toss in a marriage of convenience just for fun. In this follow up book, you take a woman who pretty much showed her ass by her actions in that book – and who showed her ta-tas for a living in the strip clubs on Bragg Boulevard – and make her into a character I wanted to stand up and cheer for as she finally gets her knight in shining armor – though his armor is slightly dented and she as much rides to his rescue as he does to hers. 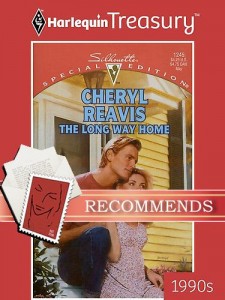 Rita Warren grew up without much and that included people who cared about her. After running from her mother’s latest grabby boyfriend before she’d finished school, she found that dancing – the only thing she’d ever truly been good at – was the only thing she knew how to do that could make her any money. Her dream was Las Vegas but when she found herself without rent money, locked out of her apartment and unable to provide for her hungry young daughter, she did what she knew she had to – even if she didn’t want to – and handed Olivia over to her, up to that point unknowing, father SSgt Matt Beltran.

With Olivia settled (in Little Darlin’), Rita followed her dream to Vegas and actually made it. But she discovered that she wants more from life and that includes being a bigger part of Olivia’s life. So she heads back to Fayetteville, NC and Fort Bragg but this time she’s got money, the intention to get her GED and plans to turn her life around. After a less than happy meeting with Matt Beltran, Rita learns that an old friend, Spec 4 Calvin “Bugs” Doyle, is in (Womack Army) hospital following a Black Hawk crash that killed almost everyone on board. The other survivor is Lt. “Mac” McGraw who is in a room across from Bugs and who is buried under self recrimination and determined to make life hell for those around him.

Mac might have most of the nursing staff running scared but Rita is less than impressed as she proves when she hurls back at him the magazine he throws at her. Rita isn’t Army and feels free to give Mac any number of set downs. It’s this lack of pity – and the fact that he thinks she’s drop dead gorgeous – that piques Mac’s interest in her though “guy like” he shows it by acting bratty at times. Not that this has any affect on Rita who brazenly asks for his help with her GED algebra class. Slowly the two begin to spend time together though neither is looking at the other as relationship material. With their unsettled personal lives needing to be sorted can these two damaged souls find something special in each other?

Rita and Mac both begin the book as difficult characters. As the villainess of Little Darlin,’ Rita has some serious shit to make up for before she can move into the heroine role. Meanwhile Mac is non-heroically struggling with the physical and emotional aftermath of his crash along with a wandering fiancee

Rita’s still in “two steps forward and one step back” mode. She has a plan but she still suffers mental set backs and has things to fix about herself before she’s ready to move on: personal growth issues, new ways to cope with roadblocks – ie not running as a way to fix the problems in her life. She has to learn to stand her ground and work things out rather than just fleeing from them since she’s discovering that even though she thought it worked in the past, it only prolongs the issues and solves nothing. But she does face up to this, admits it to herself and works on it.

I like how she advances in her interactions with Olivia, Corey and Matt. That situation isn’t going anywhere either and Rita demonstrates that she’s getting her act together and learning new normals as she faces up to what she did and how she acted. She also doesn’t take any gruff from Mac’s mother even though she’s quaking inside. She looks the woman straight in the eye, tells her what she can do with her insinuations and leaves with her head held high.

Rita has a past, a major one that lots of people know about – the stripping – and a private one that fewer people know about – Olivia. These will be with her for life and are things that she makes sure Mac knows about when they’re working out their HEA. Here’s another thing that would have been better had she confronted it and told Mac to begin with but as she says, she didn’t count on a relationship with him, didn’t plan on it and why should she tell him all this when she first meets him? But when the rubber meets the relationship road, she does insist that he figure this into their future and be ready for it. This is the point when I knew she’d finally reached her goal and could advance into a forever HEA.

Mac is doing the wounded warrior thing. As an officer, he blames himself for what happened to his men and for surviving when most of them didn’t. Up until this point in his life, he’s had it pretty easy. From a moneyed background, he’s used to privilege and the belief that things will go smoothly to whatever he wants. He has broken slightly from the family mold by going into the Army but still caved to family pressure in the choice of his “perfect” fiancee. Now he’s faced with the reality that life can suck and at first he reacts badly. He’s certainly far from perfect and noble and I like that you let him be that way.

Rita doesn’t try and make that easy for him, doesn’t pat him on the hand and try to sweep it under the rug. She tells him she understands, she gives him time to process, she supports him when he needs it and she doesn’t let him wallow. She also makes him stand on his own two feet – literally – and face the fact that his body is going to be slightly dinged from now on. One thing I really like is that Mac knows full well – thanks to his mother – what Rita’s past is before he goes and proposes to her. He knows the good, the bad and the ugly and still wants a future with her.

I enjoyed watching these two snipe and snap at each other over the course of the book – they definitely have the “for better or for worse” part of the vows already worked out. They are both strong willed individuals and clashes are inevitable but they learn to give and take, they complement each other and they are both better for being with each other. The epilogue is also one of the few that I truly enjoyed as it shows them dealing with both the ups and the downs that come with marriage and life in the military. I like that these are two real people dealing with real issues and solving them giving me the feeling that whatever else life throws their way, they’ll be able to deal with it together. B+