I think I have been waiting for you to write a book like The King’s Courtesan since I read Broken Wing.  This book has a confidence and maturity, a depth, in fact, that impressed me, despite the numerous well-used genre tropes and devices it employs and the predictability of the overall story arc. As I was reading, I was actually highlighting passages simply for their narrative force, and I was impressed at how immersive and detailed the Restoration setting felt to me. While not a perfect book, The King’s Courtesan took me by surprise in the best sort of way and made me happy I spent several hours in its company. 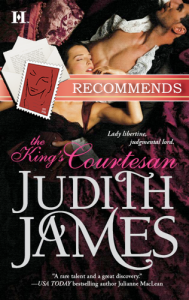 When a young soldier rescues Hope Matthews from a clumsy fall amidst a parade celebrating Cromwell’s triumphant return to London, she believes she has found her very own prince. Until, that is, she returns to the Covent Garden bawdy-house she calls home, where the brothel’s owner, Hope’s mother, informs her that she has just sold Hope’s maidenhead to a rich nobleman: “You’re a whore, my dear. Born into it right and proper, though I was married to your father for all that. You’d better get used to the idea because you can never be aught else.” Hope’s mother goes on to tell her that she is actually doing the young girl a favor, since marriage makes women “property,” and even Hope’s father was “a useless bastard,” while Hope will be “no common whore,” but “a rich man’s mistress.” Hope stands to earn half of what Sir Charles Edgemont will pay for her, a price that will be conveniently inflated in a staged “auction” for Hope’s innocence. Edgemont, predictably, disbelieves Hope’s untouched state and, enraged, forcibly drags her off to her fate.

Noting the irony of her own name, Hope “took the name and made it a talisman. She did was she needed to keep her own hopes alive,” which meant that she “stopped dreaming about what couldn’t be, and started planning for what might.” From that point on, Hope is forced to forget her dreams of marriage and respectability, trading them for the dubious power of knowing how to please and manage rich men, and over the next decade Hope becomes one of Charles II’s mistresses, a year after he is restored to the English throne.

Charles is very fond of his beautiful, vivacious mistress, and even after a year with her he is still smitten. Hope feels as close to Charles as she has to any man, which means that she still has emotional distance but is very fond of him. Still, she values her independence above any man, and with Charles’s impending marriage, Hope knows that her lack of title and property will make her persona non grata with the new queen. Having saved quite a bit of money over the years, Hope now wants to lead a quiet life, by herself, well out of court. Charles, though, is not ready to let his common-born mistress go, and when the wife of one of his former cavaliers begs Charles to help one of her old friends keep his family estate in Nottinghamshire, Charles sees the perfect opportunity. He will marry Hope off to this man, give him an earlship to make Hope a countess, and stash them in the country until he can recall Hope to court as his titled mistress.

Only a desperate man would agree to Charles’s scheme, and Robert Nichols is, indeed a desperate man. A soldier since his mid-teens, Robert has spent all of his adult years trying to stay on the right side of English politics while privately pursuing the five men who took his young sister’s life right before his eyes. Haunted each night by Caroline’s screams and pleading eyes, Robert has managed to dispatch all but one of his sister’s murderers, and not coincidentally, it is that man who has managed to convince the Crown to grant him Cressly Manor, Robert’s country estate.

Except for a long-ago crush on the wrong woman, Robert has relished his independence, albeit for different reasons from Hope. So how do you get a woman who wants nothing more than her hard-won independence to marry a man who wants nothing more than to be left alone to avenge his sister’s death? The circumstances of that event demonstrate how little independence either Hope or Robert really has and set in motion a drama that shows how intertwined the political and personal are in the world of the novel.

Reading The King’s Courtesan reminded me of how often historical Romance glosses over, discards, or diminishes the political in order to focus on the personal triumph of love. Before the Enlightenment, though, personal autonomy did not have the same philosophical primacy it does by the 19th century, and this novel acknowledges that fact by bracketing the romantic development between Hope and Robert with the incredibly fickle political realities of the time. For even though Hope and Robert are technically married, both are subjects of the king, and subject to his whims, whatever they are, making love a risky proposition.

Beyond that, though, we have the Romance stereotypes of the good-natured courtesan who loves kittens and flowers and the steel-hearted soldier bent on vengeance. If the political layer did not add complexity to these characterizations, I think the novel would have been a very derivative, uninspired read for me. But because the political truly shapes the personal for these characters, the clichés took on more depth. For example, Hope may have a luminous personality, but, as she points out to Robert, she has learned to be a good actress:

“My mother sold me . . . I stayed with a man whose touch made my skin crawl and made him believe I liked it. I didn’t have the delicacy or decency to die of shock or heartbreak. I locked my soul in a gilded cage and I laughed, I joked, I thrived!”

She has endured numerous jibes and insults, being called “Cinder Whore” and derided for her own background. Interestingly, it’s not the sexual experience that brands her, but her lack of title, good family, and independent property that makes her suspect. When the king gives Robert a “dowry” for Hope, she realizes, cynically, that it was more than what her mother sold her for but less than a necklace that Charles gifted to his other mistress, a countess. She rails against the idea that she had no choice in her marriage to Robert, a man who, she fears “thinks to treat me like a whore and rule me like a husband.” For Hope, seeming gay, winning over people’s loyalty, learning to negotiate delicate situations, are all part of making her own way in a world that otherwise has little use for her beyond her beauty and sexual appeal. She is not naïve despite her appearance of innocence, which is an interesting twist on the stereotype of the virtuous woman of supposedly low morals.

I found Robert’s character less interesting than Hope’s in part, perhaps, because his misery is much of his own making, something Hope actually points out to him:

“It is not the sweet sister that you played with in the garden that plagues you. You torture yourself. She sought to save you just as you sought to save her. I can’t believe she wanted you to be unhappy or to spend your life in a prison of your own making, my love –“ her voice was urgent “ – and perhaps, perhaps it is you who refuses to let go. Perhaps it is you who traps her.”

This has never occurred to Robert, of course, and he is not particularly open to the idea, for it would contradict the purpose of so much of his life. It would force him to take a different kind of responsibility of his feelings, the kind of responsibility Hope has never even had the luxury of. Which is what makes her feelings for him so dangerous. Despite her seemingly innate idealism, Hope understands very well the dangers in becoming dependent on a man. Robert, on the other hand, cannot decide how to see Hope. Part of him wants to see her as a scheming jade of a woman, a whore, as she fears, while another part of him wants to see her as his “elf,” as a fae beauty whose goodness only serves to accentuate his darkness and feed his brooding suffering. Neither view of Hope is realistic, but both serve his own emotional limitations.

Because the set-up of the novel was so interesting to me, I enjoyed the first half more than the second. There are a number of places where it feels that a genre blueprint constructed the behavior of the protagonists, especially in the way the romantic tension is sustained through the couple’s mutually aggravating trust issues. The middle of the novel, in particular, suffers from this, ironically making the resolution to the numerous conflicts seem a bit anti-climactic.

Still, one of my persistent problems with both Broken Wing and Highland Rebel was the feeling that the history and politics of the era were not well-integrated into the lives of the characters and the plot. And in The King’s Courtesan that fracturing is absent and the world of the novel feels authentic, detailed, and much more naturally rendered. From an elaborate May Day celebration to the architectural contrasts between London and Nottingham, I felt there was a true sense of place and time in the book that I really appreciated. There is even a debate between Hope and Robert over the true nature of Robin Hood – vigilante or hero – that beautifully illustrates the difference in their social positions. Robert sees the legendary thief as a man who exploited the poor to facilitate his thievery, while Hope sees him as rebelling against the dominant social structure. It was clever details like this that compensated for the clichés elsewhere.

I described The King’s Courtesan to a friend as a Jo Goodman-esque novel of the Restoration. The writing styles are not the same, but there is a psychological authenticity and a thematic preoccupation that the two authors share, I think. Goodman is currently a stronger and more seasoned writer, but if James keeps growing, I think she could become a master of pre-19th C historical Romance. For The King’s Courtesan, however, a B/B+.