The Iron Duke is a steampunk romance and it is very different in setting and genre from most of the romances I've read. It’s not really paranormal, but rather science fiction set in a partly-historical setting. A kind of "what if" world. What if nanotechnology had been invented by the Asian nation the characters refer to as the Horde, and used to enslave Britain’s citizens?

The story takes place nine years after a revolution in which the nanoagent-infected English (who are known colloquially as "buggers" – and this is no insult to them) have overthrown the Horde, but the buggers are still traumatized by two centuries of enslavement. They are also enhanced by the nanotechnology. The setting feels like late 19th century or perhaps early 20th century. 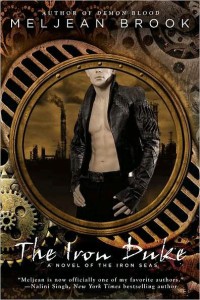 Wilhelmina "Mina" Wentworth is half-Asian, the product of a rape, so even though her mother is a countess, Mina is on the receiving end of a lot of bigotry and hatred. As the story opens, Mina, a police "inspector detective," (the bugger nobility is poor and many have to work for a living), is attending a ball in honor of the Iron Duke, an ex-pirate who destroyed the radio tower that controlled the nanoagents.

The Iron Duke, who scorns high society, isn't present, but Mina realizes she will soon meet him anyway when Constable Newberry, Mina's assistant arrives at to escort her to the Iron Duke's estate, where a dead body has been found.

Rhys Trahaearn, nicknamed "the Iron Duke," is an ex-pirate who was awarded a dukedom for the role he played in the revolution. The body found on the grounds of his estate turns out to be someone who fell from high above, and the dead man's face has been destroyed beyond recognition. Mina suspects that the man was dropped from an airship.

It soon becomes apparent to Mina that the duke's new steward called the police without consulting his employer, and that at first Rhys doesn't want Mina or any other detective investigating, because if the murder is connected to him or any of his people, he intends to bring the killer to his own brand of justice. Mina is just as determined not to allow Rhys to overstep the law.

Equally apparent, and unwelcome, is Rhys's attraction to Mina and Mina's own response to him. Mina distrusts Rhys and does not particularly like him, and knows his attentions would only bring even more hatred and bigotry toward her and her loved ones, so when he announces his intention to have her in his bed, she plans to resist with all her will.

But as the investigation proceeds and Rhys accompanies Mina through various dangers, Mina reluctantly begins to respect and like Rhys. And when they unearth a threat that endangers all of England, Mina finds herself wanting something she believes she can never have — not with Rhys and not with any other man. Will she be able to continue resisting, or will she lose her heart to the Iron Duke?

The main characters in The Iron Duke are lovable and endearing. Mina shows considerable determination and courage in pursuing justice despite facing many obstacles, some of which come from the other buggers' reaction to her race. It is not unusual for some to try to assault her for being of Asian descent alone, much less for most to look at her with hatred in their eyes, but she carries herself with dignity and does not allow anything to prevent her from doing her job.

Rhys is equally courageous and determined. Like Mina, he has a painful past, and has overcome a lot. His strength of will, as well as his eventual caring for Mina and his great admiration for her, made him very appealing. I especially loved him for not giving up on Mina, even though she rejected him countless times because of her fears.

The Iron Duke is a riveting book — so riveting that it was only after I finished reading that I realized I was missing some pieces of character development that I'd have liked to have seen.

Rhys's reaction to Mina is very different from the way he feels about other women, but I never got a strong sense of why that was. There is a lot to admire in Mina, and I loved her, but being told that Rhys "admired the hell out of her" wasn't quite enough for me — I wanted to see that admiration forming, through his eyes, in the early parts of the book. So much of the beginning of the story was devoted to Mina's POV, and to how she comes to begin to like Rhys, that I felt I didn't get enough of the other side of the equation in that section.

Later in the book, Mina has a trauma to overcome, and much attention is given to that. But Rhys also has serious trauma in his past, and yet, it doesn't seem to affect his interactions with Mina that deeply or even to cross his mind more than a couple of times when Mina is coping with the horror in her past. I would have liked to have heard more about how what he suffered affected him in the past, and even to have seen it affect him more in the present – not because I wanted to see him suffer, but in order to find him more believable.

We spend more time in Mina's head than in Rhys's, but there is also a piece of her past that I would have liked to know more about. Mina has a loving family, but it is made clear that her mother did not always look at her daughter, the product of a rape, with love. I wanted to know how that changed, and whether Mina had any early memories from before her mother had loved her. How did Mina feel when she first learned of her mother's actions right after Mina's birth? All that rich terrain was never mined in the book.

The setting is vivid and well-constructed. I'm not entirely convinced that technology could have developed as it does in this book, but I think the juxtaposition of advanced, science fictional developments like nanoagents with 19th century technologies like gaslight are part of the fun of the steampunk setting, and I loved all the thought that went into the construction of the world. It felt developed to a greater degree than most fictional worlds in the romance genre and I liked that there was so much detail to it. It truly seemed like a whole world, and not as if we were only seeing a corner of the world.

I wasn’t always comfortable with one aspect of this world – that the Asian “Horde” are the bad guys, or at least, the bad guys in the backstory (the present day story has a mysterious group of men of Eurpoean origins as its villains). This is somewhat balanced out though, with the half-Asian heroine who frequently faces down racism.

The worldbuilding is also complex and therefore occasionally puzzling but continuing to read cleared up that confusion. It almost certainly helped that I'd first read "Here There Be Monsters," a novella set on this same world which precedes this novel and appears in the Burning Up anthology.

In addition, every once in a while I'd come across some contradictory detail that momentarily confused me about the characters' past. For example, there's this bit in Rhys' POV about Mina's father: "He glanced up and regarded Rhys with an inscrutable, penetrating gaze. No question where his daughter had inherited it." These two sentences confused me because it's made clear in other places in the book that Mina's father is not her biological father, but I had spent the beginning pages trying to determine whether or not that was the case, so when I reached this line, my earlier confusion briefly returned.

Despite all the aforementioned issues, I'm giving this book a high grade because I had a wonderful time reading it. I was totally sucked in, so much so that I skipped dinner and read until late at night to finish it. I kept telling myself I'd put it down and go to sleep, but it felt impossible to do so.

The mystery surrounding the dead body and the adventures it led Rhys and Mina to undertake entertained me almost as much as the romance, which was sexy and heartwarming. What's more, the book felt truly different from other romances, even the other steampunkish romances I've read in the past. For its freshness, its riveting plot and its lovable characters, I give The Iron Duke a B+/A-.