Your science fiction thriller with horror elements, The Gone World, came highly recommended by Thea at The Book Smugglers. The Book Smugglers is a site that has rarely steered me wrong, so I decided to give the book a shot, despite the fact that it isn’t romantic. It has been described as “Inception meets True Detective” and that description is dead on. 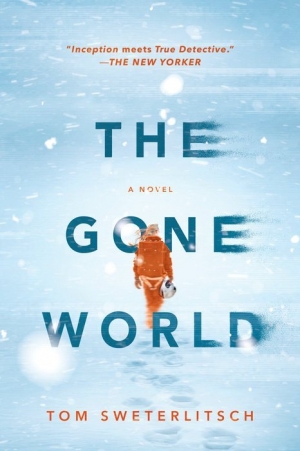 The novel begins in 1997 with a grisly murder. A mother and two of her children are killed in their home and their fingernails are removed. The father and another child, his teenage daughter, are both missing.

Shannon Moss is called to the scene. She is an investigator for the NCIS, but one who investigates Naval Space Command sailors who have time traveled. Shannon is one of them herself. It’s not possible for Shannon or the others to travel to the past, only ahead in time, to possible futures. The actual, real future remains unknown. The present, 1997, is the only accessible real place in time, and is therefore known as terra firma.

Shannon is shocked that the murder took place in her hometown, in what was once her best friend Courtney’s house. When Shannon and Courtney were seventeen, Courtney was mugged and murdered. It was Courtney’s death that led Shannon to train to be an elite investigator. After graduation she was invited to join a secretive and rigorous program for time travelers.

Shannon lost part of her leg during one of her trips to a possible 2199, when she sighted the Terminus, humanity’s end. The world ends with the arrival of what appears to be a second sun termed the White Hole. People run or are suspended upside down in the air in crucified positions. Then their limbs begin to get infected with QTNs (quantum-tunneling nanoparticles) and must then be amputated to save their lives. It’s a terrifying event and it has happened in every possible future.

Time travel was made possible when specs for the time-traveling spaceships were sent to the past by a more advanced future society so that the Terminus could be prevented before it becomes inevitable. But no answer to the question of how to avert it has yet been found and the Terminus is getting nearer and nearer to terra firma.

As Shannon investigates the murders, she uncovers more disturbing facts. At first the killer is assumed to be the father of the family, Patrick Mursult. Patrick’s teenage daughter Marian has disappeared, and it’s thought that Patrick kidnapped or killed her. But then Patrick’s own body is found mutilated and Shannon learns that Patrick was last seen boarding Libra, a time-traveling spaceship that vanished and has never been found.

Aiding Shannon in her investigation are NCIS Special Agent O’Connor, the aging boss Shannon likes and respects; the FBI’s warm Special Agent in Charge, William Brock; and Philip Nestor, another FBI agent and one whom Shannon finds attractive. But if Shannon doesn’t prevent the Terminus, all three of these men, Shannon’s mother, and anyone else she cares about will die.

Who is Patrick’s killer? What happened to his missing daughter, Marian, a girl who serves as a haunting reminder of the murdered Courtney? Where is the Libra? And why does the Terminus get closer and closer in time?

The Gone World is written in a distinctive authorial voice, one that evokes the cold of both snowy winter and chilling realities superbly.

The setting is integrated into the book and as essential as the events of the story, almost a character in itself. Pennsylvania and Virginia feature a lot and are well depicted. So is the forest Shannon ran through just before she lost her leg. The possible futures Shannon visits possess fascinating technologies. In many, the internet is in the air itself, composed of nanoparticles. In one, a cure for cancer has been found.

The story is told in past tense but alternates third person and first person, though Shannon is the only POV character throughout. This has the effect of a telescoping lens that alternates its focus between the personal and larger concerns.

The Terminus is terrifying, but so are some of the people Shannon stumbles on during her investigation. From right-wing militia members to people who commit horrific crimes, to multiple versions of the same people in multiple futures who may or may not be the similar to their other-timeline selves.

Even Shannon’s own aging process is disturbing. She ages normally, but has spent so much time in possible futures that when she’s in the past, she appears years older than she ought to be, and when she’s in a possible future, she looks younger than people expect her to appear. Shannon is sure her mother has noticed that biologically they are almost the same age, although she’s said nothing about it.

Also creepy are the Nazi tendencies of some of the characters. I have mixed feelings about how this issue was treated in the novel. A few of the villains are Nazi-sympathizers or Nazis themselves, but this was portrayed as marginal relative to the crimes they’d committed or planned. I ended up feeling that the book treated Nazism a little too lightly.

It’s impossible to give Nazism a central role in a book that where so much else is happening, a book that isn’t primarily about that topic, but sidelining it bothers me even so. This issue should perhaps not be picked up at all if it’s not going to be given as much attention as it deserves.

At one point, while visiting the future, Shannon meets a version of Nestor who has left the FBI. When she finds him, he is selling swastika flags at a gun show. He tells her that he found World War II memorabilia in his father’s basement after he’d inherited the house and began selling it, then discovered that the Nazi stuff sells best. Shannon gets involved with him after that.

It turns out there’s more to Nestor’s story than he tells her. We are meant to see Shannon’s acceptance of his story and her affection for him as errors in judgement, things that put her and her mission at risk. But though she believed he is not a Nazi himself, IMO entering into a relationship with anyone who would sell Nazi symbols goes beyond an error in judgement—it’s a lurch in the opposite direction of true north on one’s moral compass.

That aspect of it was never interrogated. There was no room for it because the book has so many other moving parts. I think it was meant to make the reader realize that Nestor wasn’t to be trusted and to heighten our general dread. It successfully accomplished that and dialed up the creepiness factor, but still.

There’s much to admire and respect about Shannon nonetheless. She comes from a working class background and was abandoned by her father as a child. She might have ended up a barfly like her cynical mother had Courtney not been murdered.

Now Shannon is determined to pursue justice. She sees her NCIS investigations as an attempt to save the innocent as well as all of humanity. Her personal quest to find Marian, the missing teen, before she is murdered is at least as important to Shannon as averting the Terminus.

Shannon is tough and has more than her share of grit. Her mantra is “Someone else would quit.” She is determined and not to be turned away from protecting the innocent no matter the obstacles.

I loved that Shannon was matter of fact about her disability, that she didn’t mope over it or feel sorry for herself, and that she had no patience with other people’s attempts to coddle her. But there were times when her disability was used to make the reader more conscious of her physical vulnerability—make us wonder if it would impede her in getting away from danger in time. I was less keen on that.

The supporting characters are believable in their portrayal and most have some shades of gray. Not all of them are likable but some are very likable. I can’t disclose who, though, since this is the kind of book where anyone is suspect. But whether good or bad, all their motives make sense.

The Terminus is a chilling and terrifying future event that looms over Shannon’s investigation. The novel has buckets of what a friend of mine calls existential dread. The seemingly inescapable end of humanity is not only waiting for us, but approaching. Why? How did the second sun come to shine its cold and unsettling light over the earth? The answer is as freaky as the Terminus itself.

As a disquieting science fiction thriller, The Gone World succeeds magnificently. The elements of horror and of science fiction are expertly executed and innovative, and the approach to time travel fresh. I can understand why Thea at The Book Smugglers gave it a 9. If I were reviewing on that basis alone, I would agree with Thea’s grade and perhaps even go higher. The book is almost seamless and very, very effective. Even the issues that bothered me were instrumental in making it so disturbing. But I can’t disregard my concerns, so my grade is a little lower, a B+.

→ Janine
Previous article: REVIEW: One Christmas Eve by Shannon Stacey
Next Post: REVIEW: The Art of Christmas by Jane Lovering