REVIEW: The Game and the Governess by Kate Noble 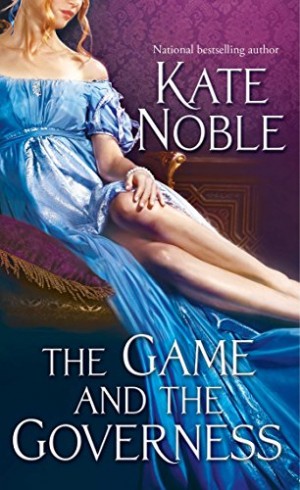 An egotistical hero doesn’t usually spark my interest. I didn’t need another narcissistic Prince Charming. Seen it all a million times, and my immediate reaction is: Meh. However, the success of an overused archetype is due to an author’s treatment of it. The way you painted Ned in words, you made him vulnerable in his egotism, and that is why it worked.

His friends harbored a veiled resentment for him, believing he was only well-received because of his title. His exasperation at that thought was tangible. He wasn’t naive enough to think that everyone would like him to the same degree if he were lower class, but he was genuinely confident of his appeal as a good friend and person.

“And by the by, I resent the implication that I am nothing more than my title.”

“Yes he did. He said that life is different for an earl than it is for a secretary. And while that is true, it im­plies that any good thing, any bit of luck I may have had in my life, is incumbent upon the fact that I inherited an earldom. And any lack of happiness Turner suffers from is incumbent upon his recent bad luck. Whereas the reverse is true. He is serious and unsmiling, thus he has bad luck. With his mill, with women, with life. I am in general of a good nature and I have good luck. It has very little to do with my title. It has to do with who I am.”

I could tell he was in for a kick in the pants when he proposed the swap with his secretary. I admit: I am a huge fan of the nobleman-in-disguise trope. From my first favorite, Man of My Dreams by Johanna Lindsey (not a great novel, but cherished in my memories), I have been an absolute sucker for this concept. It gets me almost every time, and it got me here.

Ned is privileged, and knows he is, but he’s not fake. He is a real person (insofar as a fictional man can be called real) who’s very aware he’s afforded attention and luxuries by virtue of his title, and he has the audacity to think he’d do well even without that title.

When his role is reversed with his secretary, people do not treat him well, and the marvelous thing is that he doesn’t get upset with them. He forgives them immediately and shrugs and tries again. He’s so amiable that I found myself charmed by him, very suddenly and surprisingly. Of course, he got his comeuppance on a number of occasions, and acted with blindingly foolish assurance of his own appeal, and he was immediately and repeatedly called out on it. Until then, he never truly comprehended the liberties he could take as a nobleman that no one would dare take as an untitled secretary. It was a rude awakening but he managed it well after admitting how stupid and disrespectful he’d been. The appeal for me was in the fact he was willing to apologize and admit fault. We need more heroes who accept defeat with grace.

I also enjoyed his backstory. Ned didn’t join the world of the nobility until he was nearly a teenager, when his uncle’s heir died. He and his mother lived in neither comfort nor privilege. He hauled water from the well like any normal citizen. It wasn’t something he talked about, really ever, but I think his formative years made a huge impact on his personality. This is why, although he’s admittedly egotistical, he was never insufferable. He was grounded in the reality of his former upbringing. I loved him.

And I loved Phoebe, our heroine, as well. In her youth, she wrote the earl a furious letter, saying in no uncertain terms that he was to blame for her father’s death. It’s an impassioned, pained letter with zero subtlety. A genteel lady with the nerve to damn a nobleman to hell in a personal letter? I’m so there.

But even better, we see her years later, when she’s rid herself of that anger. I could see how she matured and I liked the result. She just wanted to disappear and be unnoticed by the earl. She hadn’t forgiven him, but she no longer wanted to make him suffer for the pride he maintained that inadvertently ruined her father. Thank goodness for heroines who reflect on their actions and who do what’s right for their own mental health from the get-go. The tension of their history is still palpable without any need for a silly vendetta.

At first, she didn’t give this jumped-up secretary a moment’s notice, but he kept coming back. He obviously liked her from the start, and the inevitable happened: she started to like him back, just as I liked him. They fell in love so naturally.

No matter what, his life would have led to this moment. If he had stayed in the village and never been made the old earl’s heir, they would have met here. He would have owned his mother’s cottage, had some sort of profession, and he would have known Phoebe Baker as the governess of the Widcoate children. They would have danced here.

Or, if he had still been the earl, but a better one–one who had caught Mr. Sharp and prevented him from ever meeting her father, they would have met in London, during her season. He and the light-haired girl with dimples and laughing eyes would have danced at Almack’s, or in some other elegant ballroom.

The main antagonist was Mr. Turner. If I met him in real life, I would slap his face. He started as Ned’s best friend and destroyed their friendship because he needed to win the bet, because his entire family’s livelihood was riding on it. Okay, so your whole fictional family depends on the mill, but does that mean you become a complete bastard? Why not just be honest and let Ned know the great significance of the mill in your life, rather than play this silly game and betray the friend who has helped you for years?

Ned’s fatal flaw was that he did not understand how much the mill meant to Mr. Turner. He trusted in him as his friend and faithful secretary, never imagining how far Mr. Turner was willing to go in order to save his family’s mill; how malicious and unethical he would turn. One action of his near the end of the novel upset me so much that I could barely enjoy the lovely subsequent scene with our hero and heroine. I was angry at both you as an author and at Mr. Turner, that swine. But then I reminded myself that it would be okay, that they would love each other sincerely and that there would be a happy ending, and I was able to focus.

There were a number of things that frustrated me about the book: the whodunit villain in the end with flimsy reasons, the ruthless actions of an unlikable antagonist (but then, I suppose he’s supposed to antagonize), and the general way things seemed rushed near the climax. The timing could have been better for many things, with a more paced redemption and reconciliation.

But I really, truly enjoyed this book. I would give it a B except for the fact that I read it all in one go, in a few hours’ time, and that makes it a B+ for me. I couldn’t put it down. I had a lot of fun reading it. I loved the hero and heroine both, especially the hero, who had a lot of room to improve and was just so relentlessly optimistic the whole way through that I couldn’t help but appreciate who he was as a character and person. I’d fall in love with him, too, and he wouldn’t have to be an earl.