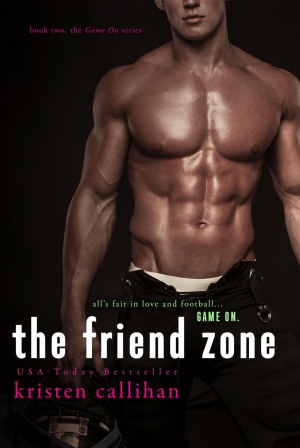 The Hook Up was one of my favourite reads of 2014 and ever since, I’ve been looking forward to the next book in the series. At the end of The Hook Up, Gray Grayson (yes, that’s his real name – his mother read The Pelican Brief by John Grisham when she was pregnant with him), was borrowing his most-likely-agent-to-be’s daughter’s car – a small pink Fiat – having lent his automatic truck to Drew (because reasons).  Ivy Mackenzie is the owner of said pink Fiat and, concerned about the safety of her precious vehicle while she is away in England, she texts Gray to tell him to be careful.  Thus begins an SMS friendship and one of the most delightful starts to a book that I’ve read in ages.  The first section is their texts to each other – which are funny and sweet and quite flirty but which also show the developing closeness of the pair.

The day Ivy is coming home, her dad, sports agent Sean Mackenzie, is stuck in New York with a client and Ivy’s sister, Fiona, is sick with the flu.  Sean asks Gray to pick Ivy up from the airport.  Both Ivy and Gray feels very protective of their friendship and there is a certain insularity to it. Neither had made any attempts to find out about the other via Google or anything else.  Ivy doesn’t even know what Gray looks like before she comes face to face with him in the airport. Gray only knows what Ivy looked like when she was about 15, from a picture in Sean’s office – and of course, she’s changed a lot since then.  Their relationship and connection hadn’t been based on anything physical and my strong sense was that they were most unlikely in any event to find each other unattractive, simply because they already cared about each other by then.

Gray is a tight end for his college football team.  His team is in the post season playoffs and trying to come to grips with a new team dynamic due to the loss of their star quarterback. He’s 6’6″, blond and well built.  He’s not a refrigerator – he’s more elegant than that but he can benchpress 430 pounds so he’s no lightweight either.  Ivy is tall, like her former-NBA playing dad – at 6′ even, she often feels gawky and awkward.  Gray appreciates he doesn’t have to hurt his back to make eye contact with her; she likes to be able to wear heels without any concerns.  Physically too, they fit together.

But they are just friends okay?  (Yeah, sure you are.)

Gray has a reputation as a bit of a manslut.  After his mother died from breast cancer when he was 16, he fostered the persona of being footloose and carefree.  Care about nothing and nothing can hurt you, right? He’s the hook up king and stories of his exploits with the many willing girls who flock to him are legendary.  Ivy doesn’t want to be a notch on his bedpost.  Gray wants more from Ivy but he’s reluctant to disturb their status quo – Ivy has come to mean so much to him and she knows him like no-0ne else does; if he makes a move and it all goes sour, what will he do without her in his life?

The sexual tension in the book builds and builds until, basically, it begins to “leak out”.  They don’t talk about it, but there are signs, obvious to everyone around them, that whatever name they are calling it, they are definitely much more than friends.

Instantly, my heart kicks against my chest, my breath going light and quick as heat rushes up my thighs. He’s giving me that lopsided grin of his. The one that looks a little bit boyish and a little bit naughty, as if assuring that you’ll have fun while he does dirty things to you.

Little touches and casual hugs, a hand on the small of the back and, eventually, even sharing a bed (without any “shenanigans” – at first).  Their first sexual encounter is also without words – consent is both implicit and overt but it is not verbal – as they wake up together and Gray starts to… explore. This may be a bit TMI but the progression of their relationship felt very believable to me. My husband was my friend first and there was no particular date where we became more than friends.  We kind of morphed into it.  I remember late nights falling asleep on his couch cuddling together – where neither of us (but mostly me) would admit there was more going on.   It may be that other readers will feel a little incredulous about how well Grey and Ivy fool themselves and for how long, but actually, it fit pretty well with my own experience (though I hasten to add there were significant differences too!), so I had no trouble accepting it.

I loved the way Ivy and Gray were with each other. I enjoyed their banter and their honesty, their conversations and their jokes.  I loved how Gray danced badly (on purpose) with Ivy so her own bad dancing wouldn’t look so obvious.  I loved how Gray encouraged Ivy to find her passion and pursue it and how they were all in for one another.  Their romance was fabulous and I just adored it.

He kisses me there against the tiles, my butt cupped in his big hands. My legs wrap around his waist, and he lifts me as if I weigh nothing. I can’t get over his insane strength. And how he never uses it against me but in only service of me. I don’t want to leave this spot. Ever.

I also enjoyed meeting Ivy’s sister, Fiona.  I wonder whether Fiona will be a heroine in a future book?  (*hint hint*).  Fi is quite different from Ivy, even though they are very close.  She’s petite and sexually confident to Ivy’s tall and kind of shy.  I laughed out loud at Fi’s description of meeting Gray for the first time:

There were a couple of things which didn’t work so well for me.  Relatively late in the book, a story thread is introduced regarding Gray’s brothers and father. It came out of nowhere for me and I was surprised at the new plot point so late in the book.  It felt… clunky; especially because most of the rest of the book was so smooth and seamless.

The other thing I queried (although this is a smaller issue) is Sean Mackenzie’s characterisation.  I haven’t re-read The Hook Up so I could be wrong, but my memory of him from that book was that he had a reputation for honesty and looking after his clients fairly and well – he didn’t suck up to his clients and promise them things he couldn’t deliver and he didn’t tickle their ears. For a younger athlete, he stood in loco parentis in many ways. That is, after all, how Gray had come to be borrowing Ivy’s car.  But in this book Sean seemed a little inconsistent.  He was portrayed as a serial cheater and a guy who devoted more time to his clients and high of “the deal” than to his family.  Given how “parental” he was with his clients, it surprised me that he could be so clueless and absent for his own children.   Perhaps I’m being unfair or I just remembered wrong, but rather than it feeling that Sean’s character had been expanded in this book, it felt, to me, more like it had altered.   These things do not, at all, detract from the wonderful romance between Gray and Ivy – and after all their romance is the heart of the book.

There is an author’s note at the back which acknowledges that artistic license was used for the timing of the post-season championship games. I know little about American College football but it did seem even to me,  to be an inordinately long post-season in the book.  Because it’s not near and dear to me, I was able to give it a pass but I wonder if other readers, ones very familiar with the sporting subject matter, will feel the same?  There’s a Sarah Mayberry book which messes with the location of the AFL grand final and even though I know it’s only fiction, I still struggled to get past it when I read that book.  I have the feeling that some ardent football fans might struggle with how the college post-season is portrayed in The Friend Zone.

I loved Gray and Ivy, separately and together and I loved watching their bond form and grow. I made the Good Book Noise (TM Smart Bitches) multiple times during this novel and definitely had a happy sigh at the end.  And seriously? Those text messages at the start? A-dorable.

Grade: B+.  Maybe that should be an A- because oh lordy, those text messages…