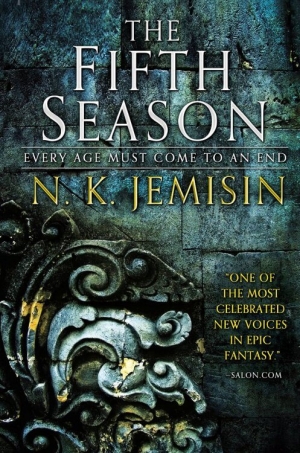 I was first introduced to your work via your debut, The Hundred Thousand Kingdoms. That novel excited me for various reasons. It was an original take on the “person fights for the throne” fantasy staple. The characters were not white. The worldbuilding was really interesting. And, of course, you’re not a white male author. In the fantasy genre, with its pervasive fondness for pseudo-European settings, you can see how those things would stand out to me.

In the years since, I’ve had my ups and down with your books. Overall, though, I enjoy your body of work and what it brings to the fantasy genre. With the increased push for diversity and representation in genre fiction, I like to think of your novels as an example of what we should aim for and what we can hope for in the future.

The Fifth Season launches a new trilogy unrelated to your previous books. It takes place on a world covered with volcanoes and that is characterized by apocalyptic events which occasionally wipe out the populace. That said, as we’ve learned from many a post-apocalyptic novel, not everyone dies. And that’s how the cycle of life in this milieu proceeds: civilization, fifth season, rebuilding period, civilization, fifth season, and so on.

Against this backdrop, we follow three women: a bereaved mother searching for the person who killed her son, who just happens to be her husband and who also ran off with her daughter; a mage charged with the task of having sex with an extremely powerful mage and getting pregnant with his child; and a young girl who is taught how to use her power. The ways these three parallel storylines unfold and ultimately intersect is nothing short of masterful. And because this is a book best enjoyed with as few spoilers, or even plot details, as possible, I’m deliberately keeping my description vague.

There are many things I loved about this book. I liked how it explored the different stages of womanhood: child, young woman, and mother. As with your previous novels, The Fifth Season deals with power and the various ways it’s used to control, oppress, and fight back. The aforementioned mages are treated like second-class citizens, even though their powers are absolutely necessary to survive on this volcanic world. (The magic system is more or less based on tectonic energy,) The ways in which their lives are depicted are nuanced: how do they fight back against the system that oppresses them? How do they buy into the system and become complicit in upholding it? Is it worth the risk to question the system? Are you willing to push back, even if it means taking damage to yourself? Anyone from a marginalized background will recognize these questions, because they’re ones we face daily.

Before someone asks, no, there isn’t a romance. Not really. It is, however, a story about a woman’s journey across a dying world and the circumstances that pushed her there. If you have read this book, I’d love to talk to you about it. There’s a lot I want to discuss, but detailing it would ruin the experience for a first time reader. Come chat with me in the comments!

With The Fifth Season, I think you’ve come into your own as a writer. The scope of the worldbuilding and the storytelling are wonderful. I want to tell readers who find the beginning of the book to be difficult and challenging to push through, especially if they’re tired of the same old pseudo-medieval European white male power fantasies that fill up the genre. It will get much easier once pieces start falling into place. Besides, there are sentient rock people. How can you not want to read a book about that? B+