The Disgraced Playboy is the second in the Notorious Wolfe series (or Bad Blood to the UK readers).  The first, by Sarah Morgan, was reviewed here.  The story treads familiar tropes: low self esteem hero plays at being a dilettante so that no one can see how empty he is inside paired with the buttoned up heroine trying to live down her own disgraceful past.  The familiarity, however, does not lessen its impact. 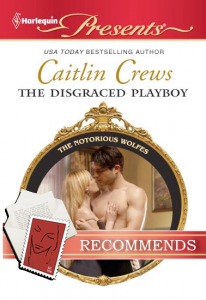 Lucas and Grace both know shame and have dealt with it differently.  Grace choose to suppress her past, turning from her teenage modeling years which were tarnished by her mother’s derision and expectations.  Lucas choose to pursue a reputation as a dilettante, flaunting his bad behavior and cultivating a care-nothing attitude.  When Lucas walks into Grace’s office as part of the grand publicity plan for her employer, they strike sparks immediately:

“You are Lucas Wolfe,” she said, ignoring the innuendo that seemed to infuse his voice, his expression, like some kind of molten chocolate. “And I’m afraid I am busy. Can I direct you to someone who can help you?”

“Too busy for my charm and beauty?” he asked, that wicked grin making his eyes gleam, his expression somewhere between suggestive and irrepressible—and surprisingly infectious. Grace had to fight to keep from smiling automatically in return. “Surely not. That would require hell to freeze over, for a start.

Because they’ve both been wearing facades for so long they immediately recognize a kindred spirit but while Grace tries to not care about the Lucas under the surface, Lucas sees Grace as an irresistible challenge, not because she is buttoned up but because she is attempting exert control over him and he cannot stand down.

Lucas wields his looks and charm as a weapon, knowing instinctively what even someone like Grace, who professes to find him lacking, might like.  Grace attempts to thwart this by objectifying Lucas:

Lucas Wolfe was nothing more than the human version of a well-known painting, widely regarded as beautiful in the extreme—even a masterpiece. One could appreciate such a painting the way one appreciated all forms of beauty. Lucas Wolfe was a curiosity to be admired, and then ignored.

The problem for Lucas is that Grace turns into something beyond a challenge, into a sort of obsession as if he knows that by capturing some part of her that it will make him better, somehow.

What often happens in these sorts of stories is that the heroine is helpless in the face of the hero’s magnetism and I’ve always found that to place the power squarely in the hands of the male.  Instead, Grace does resist Lucas and she is able to block him in ways that he’s never been thwarted before.  She resists even knowing that Lucas knows she’s weakening. That she knows she’s weakening.  There is something magnetic about Grace when she’s acknowledging her vulnerability but trying to move past it.  Yet, even a woman such as Grace, whose spine is made of steel, can withstand the onslaught of  man whose smile is “a holstered weapon” for just so long. (and frankly we wouldn’t want her to, right?)

What elevates this book from readable candy is two things.  First, the writing.  I feel like there is great joy in the writing, even during the dark scenes as if these books are pure enjoyment to pen.  There are so many great lines delivered by the characters.  Lucas says outrageous things, meant to provoke such as saying “I am my own heroin.”  or Grace telling Lucas that she does not want to be “one more hapless female connected at the mouth to the infamous Lucas Wolfe.”    Second, is in the ending.  Where many stories in the past have seen the heroine rise triumphant from the past, you rarely see the heroine embrace her past.  Grace and Lucas both decide that their shame was defined by others.  Even though Lucas lived a life of pleasure, his actions were spurred by those who criticized him, just like Grace’s decision to conduct her life in austerity.  Grace’s past really wasn’t shameful (neither was Lucas’ until maybe he made it so) but her mother and those in her past made her feel as if what she had done was dirty and wrong.  I loved the ending scenes where Grace looked upon her past, not with shame but with pride and that is what sets this book apart.  B+

→ Jane
Previous article: Author. Authorial persona. Book. It’s getting harder to tell them apart.
Next Post: REVIEW: The Man She Loves to Hate by Kelly Hunter