GUEST REVIEW: The Disappearance of Eleanor Rigby: Them

Guest ReviewerB+ Reviews / Film ReviewsMovieComments Off on GUEST REVIEW: The Disappearance of Eleanor Rigby: Them 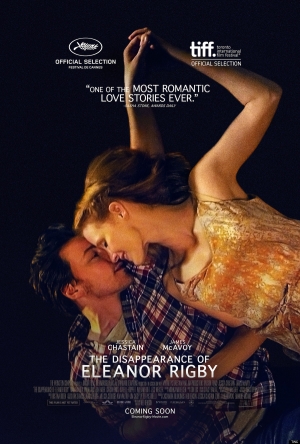 I saw the preview for this film in the middle of life upheaval. I was struggling with depression and contemplating leaving my residency two years into a three year training program. One line of the preview stuck with me “if you walk away from things you start a history of walk aways”. Cheesy, the character goes on to say in the film. This line struck me though and I determined to see it.

After some angst when the film wasn’t released in cinemas in the town that I lived (damn you Sundance Cinemas for showing previews of a movie you then didn’t screen!) I finally was able to see it thanks to the wonder of Amazon Instant Video.

This is not an easy movie to watch but its one I am glad I stayed with. This is the story of Connor and Eleanor, played by James McAvoy and Jessica Chastain respectively. Its a character driven exploration of grief and relationships. A therapist once said to me not to make any major life decisions in the six months after someone dies. Someone should have said that to Eleanor Rigby. How do you respond when someone you love has a completely different response to loss than you do? How do you find yourself when you feel lost? And how do you find a way back to someone that you don’t really want to give up on but feel angry and disconnected with?

Its hard to provide more information without giving spoilers but the film asks all of these questions. One thing the film doesn’t do is provide answers – I guess thats because the answers are individual and come down to a series of choices that are continuously made.

I have yet to watch Him and Her but I know I will in the future. Its tough to watch these two people who clearly love each other cause themselves so much pain. Many reviews on Amazon described this film as depressing. Its certainly somber to watch, but to me the final scene is one of hope. The acting is superb, and the music haunting. If you are in to action or plot driven storylines this is not going to be your cup of tea, but if you enjoy a character driven narrative and are in a contemplative mood this might just be one of the best movies you watch all year.

Previous article: REVIEW: Wolf Hall by Hilary Mantel
Next Post: REVIEW: Too Dangerous for a Lady by Jo Beverley