When Jane said she had a book set in Paris with a romance centered around chocolate, I didn’t see how I could pass it up. I’ve never read anything else by you, but I plan to rectify that omission immediately. There’s really no other way to say it: The Chocolate Thief is a lovely confection of a contemporary romance. It’s well-written, it features an absolutely delectable hero and an admirable, adorable heroine (even when she is committing theft). My one warning to readers: do not, under any circumstances, read this book when you’re hungry. 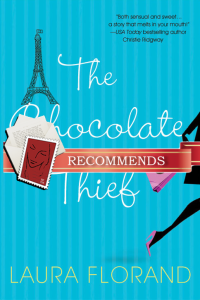 Cade Corey is the heir and executive of the family-owned Corey Chocolate empire. Raised in the company town of Corey, Maryland, she was groomed from an earlier age to succeed her father and grandfather, and she has shaped her whole life to that end. Except for one secret wish: while she is proud that billions of people happily eat Corey Bars, she really wants Corey to have a high-end chocolate line, one that would be respected by the greatest chocolatiers in the world. Cade persuades her father to let her try, and she approaches Sylvain Marquis, the best chocolatier in Paris. Unsurprisingly to me at least, Sylvain is appalled and disgusted by the idea:

“You want to put my name on your product?” he repeated, trying hard to keep control of his voice, his expression, but his eyes were practically incandescent. “My name?” He flung out a hand to where box after enticing box stamped with that name was being filled, closed, and tied a couple of counters away. “Sylvain Marquis?”

Thirty-three cents at Walmart. She flushed down to her toes and thrust her hand into her purse to close it around a rectangle in gaudy gold and brown wrapping, using it as her talisman-strength and hiding its shame all at the same time.

Cade retreats, humiliated, but she doesn’t give up. She keeps trying to win acceptance for a new line with every chocolatier in Paris, even though she really wants Sylvain. When he continues to rebuff her, she sneaks into his laboratory and tries to find his secret recipes (the different strategies she attempts are implausible but hilarious). All the time she is trying to persuade him, she’s falling for him, and who can blame her? Sylvain is both gorgeous and a consummate artist. And he’s not immune to Cade, either:

She was a a little bit stuck, wasn’t she, since her eyes had just begged him to let her stay? She couldn’t very well claim she didn’t want to learn something from him about chocolate. Nor could she hit him, which is looked as if she might like to do.

For some reason, her clear desire to do him violence sent a lick of excitement thorugh him.

He needed to get control of these licks of excitement. Last night had been bad, with that crème au basilic. He was such a sucker for a pretty, proud woman who savored the finer things in life.

He maintained a façade of cool superiority, but he could feel his heart thudding as he dueled for control with her.

Sylvain is my favorite kind of hero. He’s handsome and accomplished now, but he was a nerdy, chocolate-obsessed teenager, spotty and shy, and he still carries some of that insecurity and shyness with him in his relationships with women. He is matched by Cade, who is shy and a bit insecure because of her own background as an heiress to a billion-dollar fortune. But they are even better matched as highly accomplished professionals. Sylvain is uncompromising in his commitment to his art, and you can understand his hard-earned confidence in his abilities. Cade, who is the one on less familiar ground in Paris, displays that same level of assurance when she’s dealing with her usual Corey responsibilities, including major business crises.

I can’t express how much I appreciated that Cade was portrayed as a successful, ambitious professional. To the extent that she felt trapped by her position and wanted to do different things with her life, she faced the kinds of constraints either a man or a woman in that position would face. She did some stupid things, but they stemmed from her misreading of the context and culture rather than stereotypical TSTL heroine behavior.

The first third of the novel starts out slowly. It’s all about chocolate making and the conflict between Cade and Sylvain, and the POVs switch back and forth a lot. But once the two get together (it’s hot, and it involves both skulduggery AND chocolate), the book takes off. Cade and Sylvain’s growing intimacy is hindered by both internal and external conflicts, and I was genuinely unsure how they were going to overcome them.

The supporting characters are a fun group. Cade’s relationships with her father and grandfather ring true, as do Sylvain’s with his coworkers, friends, and family. One aspect of Sylvain’s background seemed odd to me; he was described as being from a banlieue and his parents as “rural,” (which I didn’t quite understand, since my understanding is that les banlieue are on the urban periphery), but then when we met them they were quite chic and cosmopolitan. The rest of the setting seemed really well done. The city of Paris is very much a character, but not in an exaggerated way. And I really liked the way you dealt with language. Cade is sufficiently proficient to conduct most of her conversations in French, but she trips over specific words and phrases the way anyone might. Most of the dialogue is written in English, with some particular, often idiomatic words and phrases in French, but the reader realizes that all the characters in Paris are, for the most part, speaking French (as they should be).

The story is written in a light and humorous style, with a lot of witty thoughts and asides, but there are serious undertones running throughout. It’s a difficult balance to pull off, but for the most part it works. I thoroughly enjoyed the novel, and I’m looking forward to the next installment of the Chocolate Series. I’ll just make sure I’ve eaten something delicious before I begin.

→ Sunita
Previous article: Google Nexus 7 Review
Next Post: Monday News: Why I am not in love with the romance documentary; Amazing scientific advancement improving life of children