Your book, The Charm School (1999), was suggested to me one night whilst I was prowling around on Twitter looking for answers. I had asked for suggestions of books with ugly heroines. Ugly, mind you, not plain. Plain means that at some point in the novel there will be a paragraph in which the hero realizes that the heroine is actually beautiful. Much like in a 1960’s sex comedy where the fussy and frumpy secretary will take down her hair, remove her glasses, and in the process, become a sex bomb, so too do plain heroines have the infuriating tendency to become lovely with a minimal amount of gestures. Well la-di-da. I have been taking down my hair and removing my glasses for years and not once have I ever transformed into a sex bomb. 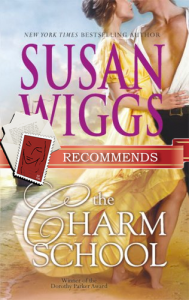 That said, I am so damn tired of beauty being the primary characteristic of romance novel heroines. Yes, I realize that the heroes are all smoking hot, too. This does not bother me. What can I say? I’m a reverse sexist in this particular matter. I am very much interested in reading about heroines who are not just simply plain, but heroines who are actively ugly. Moreover, I’m interested in reading about how heroes fall in love with heroines and are attracted to them for something other than their physical appearance, because beauty fades. People get sick. People get old. People get fat. And sometimes, people get their hair dyed. Is it really HEA if the main virtue and quality of the heroine is her beauty? I think not.

So, having put this request out on Twitter, I received many suggestions, this book being one of them. Fortunately, it is now available as an ebook, so I didn’t have to go hunting at my local USB for it.

Isadora Peabody is the awkward, ugly child in a family full of the beautiful and the socially adept—an ugly duckling as it were. And Wiggs’ uses that Han Christian Anderson tale as a frame to her tale, aligning Isadora’s journey—both literal and figurative—with that of the ugly duckling.

The book begins at a ball celebrating the betrothal of Isadora’s younger sister. Feeling out of place is nothing new to Isadora and the best she can hope for is to endure the festivities with a minimum amount of humiliation. Alas, this is not to be accomplished. Two incidents happen to push Isadora into a desperate move, a move that will ultimately change her life. The first is that she turns over a potted plant. This doesn’t seem like a big deal but it is. Much in the same way that tripping in the high school cafeteria leaves one vulnerable to attack, so too is Isadora’s clumsiness become another of her weaknesses to be laughed at and ridiculed by society. The second humiliation comes from Chad Easterbrook. I was hoping Chad was not the hero—mostly because he is named Chad. I’m sure there are lovely people out there named Chad, but I grew up on 80’s teen comedies and anyone who’s seen any 80’s teen comedies knows that Chad is the name of the local douche. I picture Chad with light blonde hair slicked across his bullet shaped skull and wearing a letterman jacket. This Chad has dark hair and the year is 1851, the setting is Boston, so he hasn’t got a letterman jacket. He is, however, still the local douche. He is also not the hero. But Isadora doesn’t know this. She is in love with him. When Chad asks Isadora to return an item to another girl, but in such a way that for a moment she thinks he is making a declaration, Isadora is beyond heartbroken. Humiliated for the umpteenth time, Isadora sees her chance to leave the party when she meets a Mrs. Lily Calhoun.

Mrs. Lily Calhoun is looking for her son, Ryan, who is the captain of one of Abel Easterbrook’s ships. Knowing that this particular ship—the Silver Swan—is currently docked (is that the correct term? I don’t know anything about the sea other than she is a jealous mistress) in Boston Harbor. Thus, we meet our hero. Ryan Calhoun is introduced in flagrante delicto with a dockside hooker. But he’s not really a rake. Calhoun is more of an idealist and a romantic. He went against family tradition to move to Boston and go to Harvard, not because he had any dreams of intellectual achievement, but because he wanted to free his boyhood friend, Journey. Ryan is an abolitionist despite, or rather, because he was raised on a plantation. The money that Ryan and Journey earn on their next run down to Rio de Janeiro will be enough to buy Journey’s wife and children from the neighboring plantation to the Calhoun’s.  Ryan isn’t going to let anything get in the way of accomplishing this goal, not even Isadora Peabody.

Because what Isadora has done is to talk her way onto the ship as a clerk and a translator.  An exceptional education with an eccentric aunt has given Isadora fluency in several languages including Portuguese, a very handy language to have when dealing with Brazilian bureaucracy. So she’s convinced  Abel Easterbrook to hire, not only for her language skills, but so that she can act as eyes and ears for him on this journey. Part of Isadora’s motivations is to prove to Chad, Abel’s vacant son, that she is worthy o his love. Thus, our motley crew—along with Lily Calhoun and her lady’s maid, Fayette—embark on their voyage to Brazil.

What follows is a romp at sea. Isadora takes to life aboard a ship like a duck to water—or is that a swan? In any case, she is eager to learn and enjoys asking questions of the crew, who—it will not surprise readers in the least—soon come to love her and accept her as one of their own. Meanwhile, Ryan Calhoun is not pleased to have her there. But he isn’t a jerk to her—or at least, he’s not a jerk to her in the same way that everyone in Boston was a jerk to her. Suspicious of her motives and leery of her ability to cope with life at sea, Ryan nonetheless feels for Isadora, even likes her. Even before they leave Boston, he has already recognized her as a kindred soul. Someone who, like himself and like Journey, could not fit into the role that they were born into. And he is attracted to her.

What I liked best about the book is that during the course of Isadora’s adventures on board the Silver Swan, her appearance becomes negligible. That is, we the readers do not get much in the way of physical descriptions of her. What descriptions there are mostly revolve around the slow abandonment of Isadora’s Bostonian clothing in favor of the more practical garments suited to shipboard life. But these descriptions do not wax poetic on Isadora’s beauty. Even when they arrive in Rio and Ryan and Isadora finally consummate their romance, we do not see the changes in Isadora directly but filtered through Ryan’s dialogue and Isadora’s acceptance of his words. Furthermore, that love scene becomes an extension of conversations that began much earlier, when—just like in the aforementioned 1960’s sex comedy—Ryan gets rid of Isadora’s glasses and instead of letting her hair down, he cuts it off. The process of their relationship is not so much giving Isadora a make-over as it is stripping her of her preconceptions about what beauty is:

She waved her hand absently in the crystalline water. “It’s not that I dislike Boston” she said. “I think it’s more that Boston dislikes me. Society favors women who are witty, charming and amusing.”

He swam toward the cascade. “You are all of that. I never laughed so much as I do with you.”

“But you’re the only one.” She experimented with her hands If she paddled them away from her, she drifted backward. “All the young women who are socially successful in Boston are not merely witty and charming. They’re also extremely pretty.”

She laughed. “Whatever it is that we smoked has made me quite drunk. But not nearly so drunk that I would believe that.” He started to speak.

She held up her hand. “I am untidy and ungainly, with no sense of all of how to dress or comport myself. I have a unique gift for making others feel awkward. I—”

He dove beneath the water and surfaced in front of her, so close she could see the way the myriad droplets magnified his pores. “You are absurd. Absurdly adorable.  Isa-dorable. I wish I could make love to you.”

She watched his face, his mouth, mesmerized. “I think you already are.”

What I liked best about Isadora’s transformation was that it wasn’t from ugly to beautiful, from plain to pretty, but from a woman constrained and defined by a narrow set of social parameters to one who became free of other people’s—people like the douchie Chad—judgment. Though she, like the Ugly Duckling, turns into a beautiful swan, Isadora’s real triumph is in finally learning how not to give a damn (frankly, my dear) about the opinions of others. Her sudden popularity on her return to Boston or the scandal that she causes is far less important than the love she found with Ryan, Journey and the rest of the crew of the Silver Swan. Because who really wants the approval of a group of shallow people who condone slavery and value beauty over substance?

Ultimately, this is a fun, light-hearted romance with a setting and characters you don’t see very often these days. For being generally rompilicious. B+