REVIEW: The Bride and the Buccaneer by Darlene Marshall 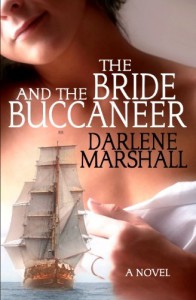 I’ve been waiting a long time for your next book but hot damn if you haven’t come through like a champ. We’ve got pirates, um – I mean privateers, pirate treasure, hot sexing, early Florida, lots of insects and a great match up of hero and heroine. Yep, well worth the wait.

Sophia Deford and Jack Burrell don’t exactly hit it off when they first meet. Nor when they meet again five years later. And none of what follows would have ever happened without Captain Tanner and his tales of a pirate treasure buried somewhere in the back, piney woods of swampy, alligator ridden Florida. And without having run into Captain Sinister (yeah, we get to visit with an old friend!), they wouldn’t be married either. But needs must and there’s a treasure worth  £50,000 to be found. Question is, who will get it in the end? Or will a greater treasure than that be found?

What a fun book! I’m always on the lookout for a pirate book – okay, okay privateer book, and in addition to sea battles and eye patches (smart trick Jack has there) I also get Florida in the days when it was a “free for all” between the Spanish, English and the newly minted United States. I can’t think of any other authors who employ this combo of plot and setting and again I say, brava for using it well.

But it’s not just an action-adventure story, though there’s plenty of that. It’s funny too. Lots of the humor is right there on the surface but then there’s the sly laugh as when Sophia comments that the naughty book Jack gives her to read has pages stuck together. Sophia and Jack are wonderful together and I laughed through their adventures as they one-up each other and initially sleep with an eye open around the other.

Sophia might be tiny but she packs a punch and keeps Jack on his toes from the get-go. I love it when the relationship between a couple is balanced all the time regardless of their physical size. These two are equally smart, cagey and quick witted. For each time one comes out on top, the next bout will probably go to the other. And they don’t hide their intelligence – especially Sophia. I love it when a heroine actually gets to flaunt her smarts.

Jack’s a great hero. And it’s a treat to read a story in which the hero professes his love first then waits to see if his heroine will return it, eventually, or double cross him out of the money. Oh, and I love his response when Sophia confesses that she’s not a virgin. “Then we will both enjoy this.” Jeez, if Sophia hadn’t taken him then I would.

Once again, I feel totally at ease in the setting of early 19th century Florida even though I actually know little about the place or politics. You meld it into the story so well that everything just flows and I get enough of what’s needed to understand what’s going on without it turning into a history lesson. Good onya for including the subplot about Reuben and Betsy. It’s emotional without being melodramatic and adds some darker shadows to the story.

I hope that your next book will shoot down the pipeline a bit more quickly but as I said, this one was worth waiting for. A fantastically matched couple, fun and adventure, seeing Captain Sinister again = a happy Jayne when I electronically flipped the last page. B+

This book can be purchased at Amazon (affiliate) or ebook format.