REVIEW: The Bells of Times Square by Amy Lane 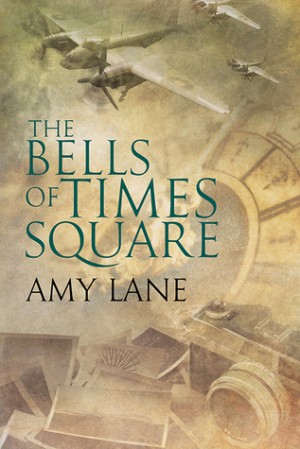 Readers have been expressing their dissatisfaction with the lack of depictions of religion or faith in romance, outside of inspirationals. The Bells of Time Square isn’t at all preachy, but religion is very much a part of the main character’s life.

By strict definition, this is a love story rather than a genre romance. It’s framed in the style of sentimental old movies like “Maytime“: Nate, an elderly Jewish man who can no longer move or speak, is a silent witness to his grandson’s secret love affair with a classmate who’s both male and black. It takes him back in memory to his own forbidden love during World War II.

After being shot down over France while photographing suspicious activity, Nate is rescued by Walter, an unofficial medic who’s been hiding out in a deserted summer home since he escaped from the Germans. Walter tends Nate’s punctured lung and broken ribs for weeks, allowing a lovely long stretch of time for friendship and intimacy to grow between them. Tension begins to spark, first expressing itself as class conflict. Walter is very self-conscious about being short, enlisted, and a poor “redneck,” while Nate is a conventionally handsome, educated officer, who comes from a background that seems comparatively luxurious. But when they’re forced to hide in a tiny closet while a couple uses the summer house for amorous activity, the real nature of their feelings comes out.

When a book focuses on just two people for a long time, they need to be worth reading about. The warmth between Nate and Walter is endearing, typified in this scene in which Nate asks Walter why he saved him:

“It was such a brave thing to do.”
“I was lonely,” Walter slurred. “And God sent me you.”
“It appears I was special made,” Nate replied dryly, and to his relief, Walter smiled, even though his eyes were closed.
“Yeah, I think that’s just proof that God loves poofs, too.”

We don’t get Walter’s point of view in the book, but we learn his character through his practical, uncomplaining care for a stranger, and then through their poignant conversations:

“When I was a kid, I thought God’s voice was the church bells, because the preacher said God was supposed to speak to everyone, and you know, everybody could hear them.”
“Yes,” Nate said, amused. “Even the Jews.”
Walter turned in Nate’s loose embrace, putting their faces close together. “That’s what I’m talking about,” he said earnestly. “It was like God was calling all of us. The Jews, the white kids, the black kids who went to the church with no bell. The Indian kids, even the two-spirit ones. I believed that, you know? And then I smiled at an Indian kid and my daddy blackened my eye, and it was like… like the whole world was one big lie, because God didn’t talk to us all.”

Walter’s rough childhood makes it hard for him to believe in Nate’s love. “You can’t… you can’t go saying big things. Don’t mean nothin’…” Nate may have had more security, but he’s never dreamed about love: in fact he’s deliberately chosen to fantasize only about unavailable men, ‘so that he would never have to choose between faith and desire.’ Walter gives him something he can’t ignore, despite how forbidden it is: “You are the first man to look me in the eye and say, ‘We are like this,’ and not apologize. To not make it dirty.”

Nate’s character had particular resonance for me, because although he’s about twenty years older than my mother, as children of Jewish immigrants, they’re generationally very similar. His childhood was lonely: “Too shy. Too different. Too Jewish for the goyim, not Jewish enough for the Jews.” At times of stress, his suppressed “New York Yiddish” speech patterns come through, reminding me of my mother on the phone with our older relatives. None of that background is necessary to appreciate him, however: much of his thoughts about religion use words and concepts I’m not Jewish enough to be familiar with, yet he’s an excellent point of view character because he’s so relatable. His questions about how to reconcile his love and his faith, his hopes for the future, his fulfillment from his photographic art, and his post-war despair over the horrors of the Holocaust are all deeply sympathetic.

It’s fairly obvious that Nate married a woman after the War, which could be read as a lousy thing to do. I think it’s depicted in a very tender way: bereft of Walter, Nate decides he needs the comfort of a Jewish life and family, and he’s clear to his fiance that part of his heart lies elsewhere. It may not have been strictly honorable, but it’s understandable.

There’s still a fair bit of story after Nate and Walter fall in love, as you might guess from the premise… scary and heartbreaking adventures. Through it all, Nate and Walter hold on to one promise: after the war, they’ll meet in Time Square to listen to the bells, and then spend the rest of their lives together. But of course, all of this is shrouded in our observer’s knowledge that something went wrong.

This becomes increasingly foreshadowed in the text:

“A kiss for luck.”
Walter’s lips were sweet, but the kiss was too short. You cannot fit a lifetime into one meeting of lips, even if you try.

The Bells of Time Square brought to mind my recent read of Think of England: both are historical m/m with Jewish characters, both contain short scenes that might be triggering for readers who are sensitive about physical abuse and coercion, both contain anti-semitic slurs — a small number in this case, and anti-semitism is not a major plot point — and both are, for the right reader, nostalgia-fests. (If you aren’t familiar with “Maytime,” a more recent expression of the trope is “Moulin Rouge.”) The writing style of the two books is very different though: as befits its pop culture heritage, this is unabashedly sentimental. I don’t think you need any cultural background knowledge to enjoy the story, any more than you’d need it to enjoy “Moulin Rouge,” if you are the type of reader who can embrace tear-jerking stories about the transcendant power of love.

The Bells of Times Square succeeds very well as a historical, a lovingly created immersion that evokes another time in a meaningful manner. And although the ending is not the conventional HEA, it succeeded as a romance for me as well. B+