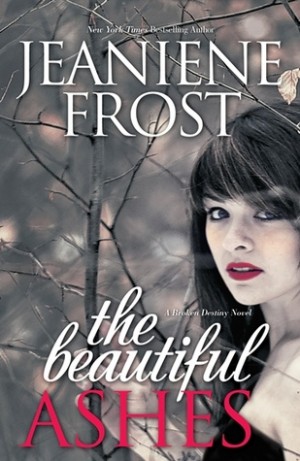 The Beautiful Ashes is the first of your books I’ve read, and it really checks all the boxes of a satisfying paranormal romance. At first I was a bit critical of this – who wants to read totally formulaic writing? – but then I realized that The Beautiful Ashes just does its job of being a romance novel really, really well. A paranormal romance that does its job well makes for a happy reader immersed a well-imagined world, with funny, well-drawn characters, lots of sexy sizzle, and an adventure with the fate of the world at stake. You are clearly a talented, experienced author who knows exactly how to give her readers more than they expect.

We meet tough, sweet Ivy, our narrator and main character, right after her sister has gone missing and her adoptive parents have died. Determined to find her sister, she goes to the scene of the crime, where she faces down corrupt police and is rescued by a mysterious savior named Adrian. The gorgeous stranger explains that the guesthouse where her sister disappeared is a gateway to an alternative dimension ruled by demons. Rather than reacting like a normal girl (running away screaming and/or fainting dead away), Ivy’s relieved: this finally explains that the double vision she’s experienced all her life, seeing and hearing things no-one else could, isn’t insanity, it’s a supernatural gift. Despite her ability to see demons and the halos of blessed places and people, she can’t access the demons’ secret portals. Luckily the smoldering, muscled, blue-eyed Adrian can, because, as it turns out, he was raised by a demon king. Adrian turned against the demons as soon as he understood their evil nature and now works for Zach, an “archon” (or angel) in the eternal war between good and evil. Zach wants Adrian to help Ivy find her sister, and wants Adrian and Ivy to put their skills together to search the demon realms for a lost weapon of such great power that it will either save the world or destroy it, depending on which side gets hold of it first.

From the beginning, I was excited about this book – Ivy has a distinctively wry, wise-cracking voice, and the whole book feels like a gossipy story told over brunch, but one about supernatural forces. Our heroine has a brash, brassy edge, sort of like a dame in a noir movie, but one who uses Facebook and reads Harry Potter , and she’s unapologetically lustful when it comes to Adrian. When she looks at him, her heart doesn’t flutter, her loins clench. Adrian feels that need too, and we quickly learn that these two people, who share the common past of being orphaned, and a common cause against the demons, have something else in common as well. Ivy is the last living descendant of the Biblical king David – he of the famous slingshot – and Adrian is the descendent of Judas, destined for treachery. Unfortunately for Ivy, Adrian can’t look at the last Davidian without seeing his potential to betray her.

The Christian mythology of this book felt fresh to me as a premise for a fantasy world, and you reinvented it for the paranormal romance genre so that the rules of the world are both fun and unpredictable. I didn’t completely understand the way the demon worlds worked (they suck up civilizations and places, which is how cultures and places disappear? ), but there were so many zingy, thoughtful details that I really bought into the world. Two of my favorites: the “hounds of hell,” who are slimy, disgusting creatures that chase everything that moves, but can’t find you if you stay stock still (making for some funny scenes in which everyone basically seems to play freeze tag). and Zach’s various glamours that hide Ivy by disguising her as a series of bizarre characters.

The best part of the Christian bones of this paranormal romance is that it allows for moral and philosophical questions to come up and be taken seriously. There’s nothing sanctimonious about the novel at all (I was a bit worried I’d get preached at, but that never happened), and Ivy spends a lot of the novel pissed off at Zach’s “boss” for refusing to interfere on behalf of her sister, an innocent victim. She’s more of a skeptic than a believer, as is Adrian. Ivy’s not interested in trying to save the world: she just wants to get the magical equivalent of a Howitzer Zach tells her about, take out some demons, grab her sister, and get back to college. But as Ivy learns more and more about the depravities of the demon realms, and sees how many other people are being tortured there, her sense of moral responsibility grows and grows. She doesn’t start this book a hero, and she’s not one at the end either, but as Ivy comes to understand the hands-off nature of Zach and his buddies, the more she feels the need to right the wrongs that she confronts. I grew to like Ivy more and more as the book went on.

The Beautiful Ashes has a nice balance of character building, world building, and an urgent plot that is paced well. “Well-crafted” is the word that comes to mind. Some elements of the book are a bit cliché – Adrian is very much the bad boy and world-weary teacher who wants to protect the innocent girl from loving him, and of course Ivy’s a virgin. An ex-lover shows up to seduce Adrian back to the demons’ side and easily-resolved misunderstandings interfere with Adrian and Ivy’s fated love – pretty typical roadblocks. The book stays pretty PG-13, which gives their romance room to evolve in the sequels. Your depiction of gender is fairly mainstream, which is to be expected, perhaps, in a universe based on the Bible – no gay people in this book, and there’s a number of jokes premised on stereotypes of men and women that annoyed me – but it’s such a solid book that I can heartily recommend it to all the romance readers who like their men powerful and their women girly. What I really do love about it, despite those criticisms, is that Mr. Hotty Adrian is the physical object of Ivy’s desire, and she spends most of the book trying to get him to make out with her, while he growls and tries to keep his resistance from weakening. The best romance books put women’s desire front and center, and you, Jeaniene Frost, are absolutely true to that, which is very validating to your readers.

[themify_box style=”yellow rounded” ]Marthine thinks you shouldn’t raise children on Oz, Narnia, and Shakespeare unless you are prepared for a love of magic and mystery to root deeply in your offspring. Marthine devoured sci-fi and fantasy as a kid, grew out of it for a while, and has grown back into it. In college, she called it “magical realism,” and now she calls it fun. Find her on Twitter at @MSatris and online at marthinesatris.com. When not writing, she edits for a literary press and teaches English to college freshmen.[/themify_box]