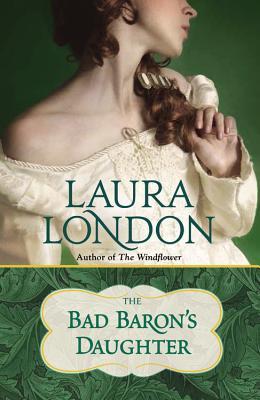 When it was announced on Twitter that several hard to find Laura London historical titles were going to be reprinted and digitized, including The Windflower, you could probably have heard our squeals from space. I don’t know if any of the books will approach the special magic of The Windflower, but The Bad Baron’s Daughter held its own.

The Bad Baron’s Daughter is a traditional Regency, very much in the style of Georgette Heyer, though not in the obviously derivative way that makes a book a yawner for me. (Having most of Heyer engraved upon your brain can be a curse for a historical romance reader.) The innocent, artless heroine Katie — who makes innocent, artless Merry from The Windflower look like Dorothy Parker — may not play that well for modern readers; it pretty much sums her up that when we discover at one point that she’s accidentally shot herself, my immediate thought was “of course she did.” It’s a tribute to how well the book is written that I found her more entertaining than annoying.

Katie may be a baron’s daughter, but she’s lamentably short on proper upbringing or education. After her father runs away from debt collectors, she’s all alone except for her sort-of-stepbrother Zack, who pragmatically sees no likely future for her other than prostitution. When notable rake Lord Linden is accidentally sucked into saving Katie from an attack, the well meaning but completely unscrupulous Zack sees an opportunity to set Katie up in a good situation:

‘Fifty pounds?’
‘Expensive,’ said Linden, raising his eyebrows slightly.
‘You think so?’ asked Zack. ‘She’s a virgin.’
Linden smiled. ‘Of course. They’re all virgins. Do you think virginity makes a woman more appealing to me? Unthink it, friend.’
‘Very well,’ said Zack cheerfully, ‘she’s not a virgin.’
‘A versatile creature. She loses her virginity in one breath’ said Linden, grinning. ‘I only wish it had been that easy for me to lose mine.’

Lesley Linden is of the class of devastatingly cool heroes, the kind who always has a bon mot on hand and will always win a fight, without even getting his cravat mussed. He has an endearingly human side though, as this conversation show, as well as an irascible temper than makes him uncomfortably violent at times. (If threats of rape are too disturbing for you, better to stay away.) Naturally Katie worships him, but his previously unknown better nature asserts itself and makes him a reluctant, supposedly avuncular protector. (And Katie needs rescue about every other day.) Unlike many books with this set-up though, sexual tension is always simmering below the surface and occasionally breaks out:

He fit her closer to his hard body, savoring her yielding softness, her stunned surrender; his lips moved hungrily over the fragrant curve of her neck, whispering her name over and over as if it were a magic charm that would increase his power over her until, finally, she would be his. He told her that he wanted her, that she shouldn’t be afraid, that he would help her, please her. One of his hands pressed firmly on her back, his facile fingers opening first one and then another of the buttons that bound her inside her dress, and his lips moved up to her ear, murmuring reassurances.

The obvious attraction between them makes the somewhat unsavory situation more palatable, and there are touches of tenderness from Linden that also make the happy ending more probable than it might otherwise seem.

Much of the fun of the story comes from a lively cast of secondary characters. There’s Linden’s forthright grandmother, who advises Katie that Linden admiring her freckles is “just the kind of thing a man will say when he wants up your skirts, my girl. Men would admire your bunions if they thought it’d get them anywhere.” And there’s Linden’s on-again off-again mistress Laurel, who takes charge of Katie for awhile:

‘… isn’t it so that no lady with even a thimbleful of self-respect could allow a gentleman to purchase her anything as intimate as clothing?’

‘Well, Linden pays for mine, and I,’ said Laurel baldly, ‘have plenty of self-respect.’

The book is definitely from Ye Old Skool and some readers won’t be able to get past that to enjoy it. But reading it took me back to when I was first reading Regency romance, relishing the interplay between characters and swooning over witty heroes who are always there when you need them. And I just loved the trip. B+