You have the terrible tendency of ruining me for other books. What I mean is, I read a Sherry Thomas book, and then nothing else I read really satisfies me. This was the case for me with Tempting the Bride because it has within its covers several romance tropes that I adore. The first is unrequited love, the second in an amnesia plot. That’s right, an amnesia plot. 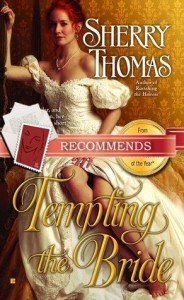 David, Lord Hastings, has been in love with Helena Fitzhugh pretty much since the moment he met her. Not Helena’s stunning beauty of a sister, Venetia, no, it’s Helena for Hastings. Having been fifteen when he met her, he decided that the best way to demonstrate his love for her was by criticizing her intelligence, looks and anything else he could think of. The result is, of course, that Helena loathes him. David is Helena’s older brother’s best friend, so they’ve found themselves forced together often, and each time he finds a way to antagonize her. But inside he quakes with deep and abiding love for her, admiring her independent nature, her beauty and her obvious intelligence. That is, until he discovers that Helena has been secretly visiting Mr. Andrew Martin, a married man.

Helena and Andrew Martin have been in love for years. Despite that fact, Andrew capitulated to the demands of his mother and married another woman, even knowing that his decision would force Helena and him to be apart forever. But Helena does not care about this. She is willing to risk her reputation in order to be with Andrew, even risking sneaking into his room at a house party. Her nighttime antics are discovered by Hastings, and he makes haste in both warning Helena off from such foolishness and in telling her brother about her dalliance with Mr. Martin. Helena’s brother, Fitzhugh, wastes no time in sending Helena, along with his wife and sister on a tour of the Americas. But even her extended absence has not diminished her love for Mr. Martin. She is overjoyed to receive a note upon her return from overseas from Andrew telling her to meet him at a hotel, and to tell no one. Hastings, knowing that Helena will not be deterred in her love for Andrew, discovers the plan and hurries to the hotel to stop Helena from ruining herself. He discovers that Helena and Andrew have been set up by Andrew’s wife and sister-in-law in the hopes of catching him committing adultery. Hastings hatches a plot to have Mr. Martin’s sister-in-law find he and Helena in a romantic embrace, celebrating their elopement. Indeed, she does find them, and word spreads like wildfire that Helena and David are married.

After heading to Helena’s brother’s home to advise her family of the wedding, the couple agrees to leave London to David’s country home, where his illegitimate daughter lives, to allow the gossip to dissipate. But as she’s leaving her brother’s home, Helena is hit by a horse and carriage and receives a blow to the head. When she awakens, she remembers little of her past, and nothing from the time she was fourteen on. She has no memory of David, and is shocked to hear that she’s married to a man she does not remember. David, not being an idiot, seizes upon the opportunity to begin anew with Helena, and woos her with kindness. As she begins to remember her past, David owns up quite quickly to how horrible he was to her, but instead of being outraged, Helena is delighted with how well she stood up to him, and finds herself amused at the stories. When he admits to her that they are not married, but were posing as a married couple in order for her to avoid scandal, she decides that she’ll seduce him (she remembers nothing of Andrew and has no interest in him), so that they can be married in reality. David is reluctant to consummate his relationship with Helena, encouraging her to wait until she remembers more, but she is determined, and this is a culmination of all of David’s hopes and dreams. Soon they have begun a spicy sexual relationship, but what will happen as Helena’s memories return? Will she regret her relationship with David, and wish to return to Mr. Martin?
As I said, this story appealed to me because I love unrequited love stories, and I enjoy a well done amnesia plot, contrived as they might be. I enjoyed Helena and David’s chemistry – they spend the first third of the book despising each other and their ripostes were incredibly entertaining. I liked that we had the opportunity to be inside David’s head so that we understood how painful he found the situation with Helena, and how his actions did not come from a selfish place (despite her interpretation of the situation), but one of concern for Helena. And once her accident occurs, his love for her is evident in every action he makes. The story is well paced, the love scenes are really hot, and as always, your prose is beautiful.

If I had any complaints about the story, it’s that I wished that Helena weren’t quite so brittle. She’s not a particularly likeable character. She’s very nasty to David and she runs quite hot and cold with him. Granted, these changes are justified as her memory returns, and certainly a lifetime of antagonism is not going to disappear immediately, but I wish you’d softened her a bit. She was very good to David’s daughter, Beatrice, which I appreciated, and she’s quite loyal to her family. But it was far into the story before I really felt that she deserved David.

Overall, Tempting the Bride is a truly enjoyable historical romance with funny characters, beautifully written prose and a satisfying ending. It stands alone quite well, although I’d encourage readers to read the other entries in the Fitzhugh Trilogy, as they are all entertaining reads. Final grade: B+