REVIEW: Talk of the Town by Joan Smith 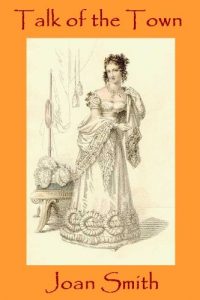 Daphne Ingleside’s visit to her Aunt Effie in London was meant to add a little spark to her placid country life. And it did—once the two women decided to write Effie’s memoirs. For Effie, a faded divorcée, had been the beauty of London in her day, and many of the ton feared their misbehavior would be disclosed. The Duke of St. Felix, misinterpreting their project as a means of blackmailing his family, antagonized the sharp-witted, beautiful Daphne to his peril. Regency Romance by Joan Smith; originally published by Fawcett

“Talk of the Town” was rated by “Good Ton” (wow, I miss that website so much) as “superb” and I can see why. Daphne and Richard (don’t call me “Dickie.”) snap at each other in ways that immediately let us, the reader, know that they are made for each other. Most of the fun of the novel is watching them glare at each other even as they’re slowly falling in love. Yay, there is no insta-lust here! Yet there is a lot more added to that basic plotline and much of it is wonderful.

Daphne Ingleside goes to visit her aunt in London as a means of passing the time but also to finally meet the “Black Ewe” of the family. Effie – once the reigning beauty and toast of London – became infamous when her philandering husband caught her in flagrante delicto and divorced her. For some reason (and I was never quite sure why given how he destroyed her reputation) Effie still holds a candle for him but that didn’t stop her marrying again. In fact she married twice more – once to a nabob and once to a plain and not wealthy Mr.. Along the way, she’s had adventures and loaned money to countless “friends” who never bothered to pay her back even though she’s run through her money and lives in straitened circumstances.

Now she’s thinking of writing her memoirs – just a book about her travels, really – and Daphne’s offered to help. The notice in the paper of her plans brings old “friends” scurrying to Effie’s apartment, terrified that they – and their peccadilloes – will be mentioned. Effie doesn’t immediately realize why after twenty five years all these loans are being repaid – with the 5% interest Daphne demands – but Daphne does. When a tall, dark and haughty Duke arrives at his sister’s behest – it’s nothing she did but rather what her husband did in his feckless youth – sneering at Daphne and insultingly calling her and her aunt blackmailers, it gets Daphne’s back right up. “We never,” she coldly tells him, “mentioned any such thing. But why shouldn’t Aunt Effie get her money back from people who took advantage of her for years.”

The ton is in a tizzy over what Effie might mention and frantic to get on her good side. Not, mind you, that they’ll actually invite her or Daphne to anything since Effie is a divorcee. But before long, Daphne is actually being accepted in Society (she is the otherwise unexceptional daughter of a good family), attended by Beau Brummel, and Prinny himself is eyeing Effie as a possible new mistress. Old secrets, however, are about to come out of hiding. 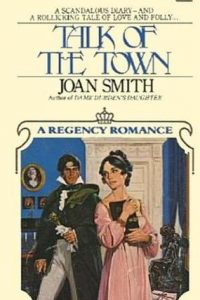 As I read the book, I found myself delighted at how the book includes all the standard tropes of Regencies and yet also turns them upside down. Of course the hero is a rich and influential Duke who begins by issuing commands (actually he continues issuing commands even long after he realizes that this does him no good as Daphne simply ignores them). The heroine is a country miss who actually has little interest in a Season until she is offered the opportunity to have one. Even then she shrugs and thinks “why not” rather than worrying about finding a husband.

Aunt Effie is (gasp) a divorcee who won’t be received in public – until she is again. Beau Brummel postures and smirks, uttering witticisms although he’s fallen out with Prinny and is on his way out of favor – though Richard tells Daphne that it might still take him another year to do so. A voucher to Almacks is still the ne plus ultra for any young deb yet Daphne has little understanding nor care for how vital it is not to upset the patronesses.

Everything that we long time Regency readers have been taught to expect, look for, and worry about for our heroines and heroes is here and yet flipped on the head. I was laughing with glee as Daphne easily puts Richard on the back foot after which he leaves vowing never to see her again even as he plots ways to do so. Daphne’s parents are delighted with her rise in Society while having no idea of the shock waves she and Effie are unleashing on London. Richard initially plans to intimidate Effie into not mentioning his (idiot) brother-in-law before discovering there are a few skeletons in his own family closet he needs to find out more about.

Still there are some issues with the book. I never understood why Aunt Effie still seems to love her first husband although he divorced her for doing much less than he was – and dragged her name through the mud in court given how a divorce was obtained then. Another character talked of obtaining a divorce from his wife though she seems to have given him no cause. But maybe this is meant to be a dig at the actual process. Richard is indeed the haughty Duke for much of the book until he’s totally humbled by the end but initially he’s a bit insufferable. Daphne is a spitfire and able to cross verbal swords with anyone yet she can also be willfully stubborn and truculent.

I have the feeling that if I’d read this book twenty years ago, I would have totally adored it. Even with the issues, I still enjoyed reading about a strong but not anachronistic heroine as well as watching Regency conventions twisted inside out enough to give it a B+