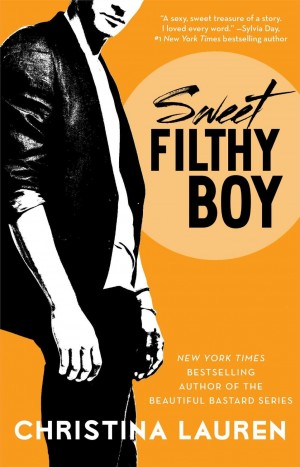 I read your first release, Beautiful Bastard, and didn’t really connect with it, writing it off as another NA book that totally didn’t work for me. But after seeing on Twitter how much Mandi from Smexybooks enjoyed Sweet Filthy Boy, I decided to give it a go. I’m delighted to say that I really enjoyed it.

Mia Holland has just graduated from college and is Las Vegas bound with her besties, Harlow and Lola. They’ve got one weekend of debauchery before they have to get on with the business of being grown ups. Mia had a horrible accident a few years ago, ending her promising career with the Joffrey Ballet. Mia didn’t speak for six months after the accident, experiencing an almost dissociative reaction to the accident. Her only solace during her recovery was writing letters to herself. They helped her articulate what she was feeling “for the record”. Her father, who is overbearing in the extreme, grasped the accident as an excuse for Mia to start a “real” career, and has agreed to pay her way through college in Boston where she’ll pursue her MBA. But for now, a weekend in Vegas is just exactly what the doctor ordered.

Mia resolves on her weekend that she’ll act like someone else. She’ll be bold and daring. She’ll do her best to block out the horror of the accident, and she’ll have a blast. On their first drunken night out, the girls are in a bar dancing and having a great time when Mia’s eyes connect with an incredibly handsome man across the dance floor. He’s the best looking man she’s ever seen, and because she’s acting bold this weekend, she maintains eye contact. Sadly, she and her girls flit off before she’s able to actually speak with him. When the girls finally roll home, Lola and Harlow fall straight to sleep, but Mia is kept up by the raging party going on in the hotel room across from theirs. She finally goes and knocks on the door, and who should answer but Mr. Tall and Dimpled. As they begin to talk, she realizes he is French and his name is Ansel Guillaume. He flirts endlessly with her, but she won’t give him her name. The next day, the three girls meet up with Ansel and his buddies. As the day becomes night. naturally shy Mia finds Ansel incredibly easy to talk to. They drink more and more and flirt and act on their attraction. When Mia wakes, it’s to the worst hangover she’s ever had, and yes, a gold band on her band. She’s horrified. She remembers next to nothing about the night, but can tell she’s had quite a lot of sex and far too much to drink. She finally gets up and goes to find Ansel, who greets her also wearing a gold band. He hands her a letter she wrote to herself the night before. She proposed, and then made Ansel promise no matter how hard she tried to flee being married to him, that he’d make her wait until the end of summer to get an annulment.

Ansel is a remarkably sweet guy, and he really has fallen for Mia. After the weekend in Vegas, he chases Mia back to San Diego and tries to talk her into coming back to Paris with him for the summer. He makes good money and while he’ll be working very hard, she can stay with him and figure out if going to Boston is really what she wants. Of course, Mia says absolutely not. Her parents will never stand for it, and she just isn’t impulsive like that (their marriage notwithstanding). In the end though, Mia hops a plane and decides to go to Paris. Her father is furious, her friends are as shocked as Mia is. But she’s decided to do this one thing for herself.

When they arrive in Paris, Ansel is working very long hours and Mia is discovering Paris. She acts as tourist and at night, she and Ansel play out their fantasies. But she knows Ansel is holding something back from her. Ansel had a prior relationship that was long term and quite serious, but he’s reluctant to talk too much about it. He’s assured her it’s over, but he’s very reluctant to discuss it and she feels like he’s holding something back. Will Ansel’s secrets tear them apart? Or will they be able to build a foundation to keep their romance going past summer’s end?

I really enjoyed this book. First, it’s set in Paris – my favorite city in the world, and you do a nice job of capturing some of the less popular spots to highlight in fiction set in Paris. Second, I really liked how this book felt “New Adult-y”. These were not barely out of college kids experiencing “adult” issues. These were two young adults who did something impulsive. The way they dealt with it seemed really credible to me. I loved how steady Ansel was. He’s a truly lovely beta hero, one who is strong and beautiful and has this gorgeous soul, but is also not an overbearing alpha douchebag. I really enjoyed Mia’s growth as a character. She starts off so timid and unsure, but in the end, you provide us with glimpses of the adult she is becoming/will be. It also has to be said that this book features some incredibly hot sex scenes. They are varied, interesting and propel, in particular, Mia’s slow journey from college kid to adult. They are some of the best I’ve read in New Adult literature.

Overall, Sweet Filthy Boy was a totally enjoyable reading experience. I’m thoroughly excited to read the next installment in the series. I’m always delighted to say when I was wrong about an author. And in this case, I’m so glad I gave your work a second chance. I don’t regret it at all. Sweet Filthy Boy gets a B+ from me, and a strong recommendation.

→ Kati
Previous article: Monday News: Facebook screws with its users, the Netherlands tests the resale of digital books, a new documentary on Amazon, and The Princess Bride gets Legoed
Next Post: REVIEW: Seduced by Molly O’Keefe