Recommended Read
Right now this novella is on sale at Loose-Id. Sorry, looks like the sale is over. 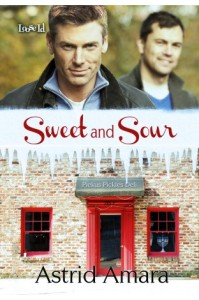 Miles thought he and Itai would make a great team, despite the infidelities haunting their past. After all, Itai is smoking hot, they’re both driven entrepreneurs, and they love each other. What else did a person need? Well, a lot more, apparently, because not only are they no longer passionate, they don’t even share the same passions. Like people, affections change, but Miles wonders if a relationship this broken is truly worth repairing.

Itai’s business launch with his ex-boyfriend isn’t helping. And Miles himself has a new business to grow over a busy few weeks where Thanksgiving and Hanukkah collide to form either the best holiday season ever, or a kosher caterer’s worst nightmare. But help comes in the unexpected, ruggedly handsome form of Detective Dominic Delbene, a pickle aficionado with his own ghosts, who stakes out the deli to capture a dangerous drug dealer.

As Hanukkah’s eight days and Miles and Itai’s relationship comes to an end, Miles discovers that Nic is not only good with pickling; he’s good at everything.

At this time of the year we’re inundated with holiday stories but for the most part, those stories are about Christmas. When I see a submission for Hanukkah, I perk up and take notice. Since this is a 40,552 word count novella, I figured I had nothing to lose by giving it a shot. I’m glad I did.

Miles runs a kosher vegetarian deli, Itai is a computer wonk while Nic is a cop. Little details of their jobs and careers – much more so in the case of Miles – are a major part of the story. I love this since I believe if you’re going to give a character an interesting job, make it count and be part of the whole. There’s enough description about the scrumptious sounding food Miles serves up to have made me hungry almost the whole time I was reading this! But it’s not just the finished products here – we see Miles prepping, planning, buying, experimenting, catering … in other words doing what a working deli owner would do.

Since the story is mainly told from Miles’s POV and he know – and cares – little about computers, it makes sense that the details there would be sketchy but I appreciate the fact that Itai isn’t just a cardboard cutout computer guy. His job also plays into the story as does Nic’s background. As the reason for him to be at the deli, we need to know what’s brought Nic into Miles’s orbit and as a draw between him and Miles, his childhood working in a deli is also important. Nic’s appreciation of Miles’s food is another nice touch. Miles cooking is his passion so for someone to notice, appreciate it and care about food means a lot to him. The fact that Nic knows his way around a commercial kitchen is the cherry on Miles’s cake – and damn sexy at the same time.

I also like that these men are real. Sometimes they’re happy, sometimes they’re sad, a few times one will be pouty or feeling slightly pissy and mad at the world. But they act appropriately for the situation and act realistically.

Since it’s a novella and tells the breakup of one relationship at the same time as the beginning of another, there’s a lot to pack into the word count. I find the telling believable since there have been rumblings in the old relationship and Miles and Nic have so much in common at the start of theirs. I liked the little details that highlighted how Miles and Itai have been and are drifting apart. There’s no sudden, volcanic break but rather a slow breakdown. Meanwhile, Nic knows how to flirt and be sexy around a guy he’s interested in and it’s like watching a parched plant soak up water to see Miles respond. Nic notices how Miles likes his coffee!

For readers who want it, there’s sex. Hot and raunchy sex, slow and by rote sex – another show of how the old relationship is fizzling – and then there’s the “wanton, senseless, graphic intercourse” that Miles and Nic both want but that Miles is too honorable to engage in before officially breaking up with Itai. Miles is a stand up guy and I don’t mean that in only a sexual manner. That tells me a lot about this character and makes me pull for the two of them. They’re both keepers.

The ending might be a little dramatic but is balanced by how Miles helps breakup the crime take down going on. And then we get the full-on, dirty sex that Miles has been craving. His Hanukkah gift to Nic is fantastic as is his way of announcing it. The final resolution of the deli tells me that these two are made for each other – after all, how many people would find the smell of vinegar to be a turn on? B+