I’m pretty sure DA’s readers know that you are an autobuy author for me, but just in case, I’ll open this review by reminding everyone how much I loved the first book in the O’Neil brothers trilogy. So needless to say, I have been looking forward to the next two stories. This installment takes place in the summer, as the title indicates, and features Sean and Élise’s romance. While it doesn’t have the holiday backdrop that you do better than just about anyone writing romance today, it’s an enjoyable and satisfying read, with layers that emerge as the story progresses. 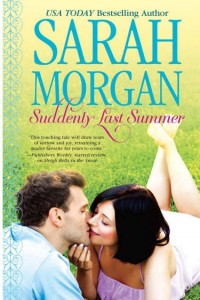 Sean is the brother who got away; while Jackson runs the business side of the family resort, Snow Crystal, and Tyler organizes the sports side with longtime family friend and Snow Crystal employee Brenna, Sean practices orthopedic surgery in Boston and comes home as infrequently as he can. This pattern is upset at the beginning of the novel, when the grandfather and patriarch, Walter, suffers a heart attack. Sean accompanies him back to the resort and stays for a few days to monitor his recovery. This brings Sean back into close contact with Élise, Snow Crystal’s French chef. Sean and Élise had a passionate one-night stand the previous summer, but both are adamant that they are not interested in more than that with anyone, and they keep reiterating that despite the attraction that sizzles between them.

Sean is the family member who has put himself on the outside, while Élise is the outsider who has become a beloved member of the extended O’Neil clan. She runs the restaurant and frets about the new café, whose opening falls behind schedule when Walter’s illness makes him unable to complete the work. Sean impulsively agrees to finish the deck so that the grand opening can take place as planned, and proximity to Élise leads exactly where you think it will.

Caught off guard, she lost her balance and fell against him. She put her free hand on his chest to steady herself, met his eyes and almost drowned in a flash of intense blue, heat and raw desire.

“You asked me to let you know if there’s anything else I need.”

“I didn’t mean—” She couldn’t breathe properly. The attraction was so shockingly powerful it almost knocked her off her feet. “You promised you’d finish the deck.”

“You’ll get your damn deck.” His voice was rough. “You think about it, don’t you?”

“Neither is pigheadedness. Want me to remind you what happened? Who cracked first last time?”

Her heart was pounding. “I didn’t crack.”

“Honey, half of that shirt I was wearing is still lying somewhere in the forest. We never did find it. Maybe next time we shouldn’t let it build up.”

“It’s not building up. I make that sort of decision with my head, not my hormones.”

“Really?” His eyes were back on her mouth. “In that case your head was in one hell of a hurry to get me naked.”

The first half of the novel is basically Sean and Élise throwing themselves at each other but swearing nothing more can ever, ever, happen between them. Buttons fly as shirts are ripped off, lovely dresses get drenched in the rain, and the Snow Crystal forest sees a lot of hot and heavy action. The contrast between their relationships to the resort couldn’t be more marked; Élise has burrowed into Snow Crystal thoroughly and works hard at suppressing memories of her Parisian past, while Sean has a fast car to get him back to Boston whenever he starts to feel as if he might want to hang around for longer than an afternoon.

This opposites-attract, I-want-you-but-I-don’t-can’t-shouldn’t dance could get tiring in less skilled hands, but Morgan infuses Sean and Élise’s relationship with enough mutual liking and non-lustful interaction that their personalities emerge over the course of the story and I can see what they have in common besides the sizzle. The scenes in which they open up to each other about their pasts are great, and they have enough conversations and interactions with other O’Neils and resort visitors that the reader gets a feel for who they are apart from the romance arc.

As was the case in the first novel, this is a romance that is embedded in a larger world of characters, so we spend a fair amount of time with Jackson and Kayla (from Sleigh Bells in the Snow) and especially with Walter O’Neil. He is pivotal for both Sean and Élise, Sean because his fraught relationship with Snow Crystal is embodied in his tense interactions with his grandfather, and Élise because Walter as much as anyone represents the family she longs to have but denies herself. If you find revisiting happy couples annoying, Tyler is right there with you and adds comic relief counterpoint to the HEA shared by Kayla and Jackson. We see less of the women family members here than in the previous story, which I was sorry about, but it makes sense for the storyline. I should also add here that you’ll get more out of the subsidiary storylines if you’ve read Sleigh Bells in the Snow, but you don’t need it to understand and enjoy what’s going on here.

I didn’t warm to Sean and Élise and quickly as I did to Jackson and Kayla, but that’s a taste not a quality issue. They’re so brittle-feeling, and all the pushing away they did to each other had the effect of distancing me too. But they won me over in the last third of the book. There is a Chekhovian gun in the first act that goes off in the third, and it propels the romance arc forward, deepens the characterizations, and enriches the way the characters interact with each other. Watching two tightly wrapped people slowly unfurl and relax by the end is very satisfying indeed. I’m still not entirely convinced by the ending (not the romance but the practical decisions that seem to be on the horizon). But I guess that means I have to read the third installment and see how they’re doing, doesn’t it! Grade: B+

→ Sunita
Previous article: Thursday News: SCOTUS rules against Aereo, unanswered questions from the Aereo ruling, SCOTUS may hear Marvel case, and the In Death books may finally come to film
Next Post: REVIEW & Giveaway: Hope at Dawn by Stacy Henrie