I’ve enjoyed your earlier I-Team books both in print and audiobook format and I was very excited to read the next instalment. You are one of the few authors I find reliable in the romantic suspense department these days. While it’s true that there is heightened reality in fiction, your characters make sense and fit into the world I know. The law enforcement agencies are subject to real problems and don’t act in ways that are unbelievable to me. 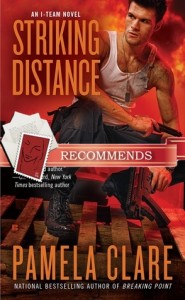 Striking Distance is the story of Laura Nilsson, a Swedish-American broadcast journalist who was abducted and reportedly beheaded by an Al-Quaeda terrorist in Afghanistan some eighteen months before the story begins. Senior Chief Javier Corbray is a Navy SEAL in charge of the ground crew on a mission to capture the terrorist responsible.

Javier and Laura have history. Nearly two years prior to her abduction, they met in Dubai and had a wild no-strings fling (which is documented in the self-published prequel novella First Strike). Two months after that weekend, Laura was abducted. Javier has made it his business to get his guns in on the mission to capture the man responsible and it is with amazed delight that he finds Laura isn’t dead at all. The SEALs effect a daring rescue and Laura is restored to her Swedish family.

Fast forward another two years – Laura is now working for the Denver Independent on their prestigious I-Team and trying to get her life together after her ordeal. She testifies against the man who held her captive for eighteen months at his trial held in Washington. After her testimony, he calls for the faithful to kill her, which call is unfortunately widely publicised by the media, and Laura is again at risk. Meantime, Javier is also in Denver, visiting his old buddy Nate West (husband of Megan (Skin Deep), sister to Marc Hunter  from Unlawful Contact) as he recovers from serious wounds he sustained in a mission gone wrong, and PTSD (about which he is in denial).

Laura and Javier meet up again and when a bomb blast nearly kills her, Javier decides he needs to stick close to protect this special woman who made an indelible impact on his heart nearly four years earlier. Laura has recovered physically and has had intensive therapy to assist in her recovery from the torment of her captivity. She was regularly beaten and raped and threatened daily with beheading. She was so traumatised, when the SEALs found her, she barely remembered her own name. She is an extremely strong woman but she does not believe she will be able to engage in physical intimacy again and there are secrets marked on her body she wants to keep very private.

Those with triggers about sexual violence and violence against women may wish to avoid this one. While the rapes are not at all graphically detailed, there is a fair amount of violence toward Laura detailed throughout the course of the book. I felt the trauma of her captivity was handled sensitively and realistically (bearing in mind this is fiction and I’m not an expert in such things) and I didn’t think the violence later in the book was gratuitous but there is enough of it that it deserves a warning for those who dislike such things in their reading.

It is difficult to say more about the plot without giving away spoilers. The path to Laura’s and Javier’s happy ending is not at all smooth, there is much danger and heartache for Laura and not everything can be wrapped up in a neat little bow. There were parts of the story, particularly near the end which had me in tears. Rest assured there is a romantic HEA but readers will probably need tissues handy because the story is not just about the romance.

Javier doesn’t expect anything from Laura but as they start to get closer, their old attraction sparks.  It does take a long time before the pair become intimate and even then, there are certain things which are off limits for a long time.  I liked that their sex life was portrayed as full and mutually satisfying even when it wasn’t “tab A into slot B” sex and I enjoyed Javier’s creativity.  (Also, I never knew shaving could be so sexy. Oh mama!)

I liked that you depicted Muslims as people, not stereotypes, and that you  were respectful of their culture and made it clear, without being preachy about it,  that the vast majority of them are not terrorists and do not support terrorism.

There were moments of humour amongst the darkness of the main story – when Javier gets caught naked when Laura is skyping had me chuckling, and little things like this made me smile as well:

Javier opened her makeup kit, held it edge-to-edge with the dressing table, and swept everything—every vial, brush, tube, and bottle—into the kit with his forearm.

Laura gaped at him. “That stuff is worth hundreds of dollars.”

He shrugged, then shut the kit. “That’s how SEALs pack makeup.”

Many of the previous I-Team couples featured in the book and, for the most part, their presence was necessary to the plot and furthered the story.  Zach (Breaking Point) and Nate featured fairly prominently and Laura and Megan bonded over shared traumatic experiences.  Julian Darcangelo (Hard Evidence) and Marc Hunter continue their bromance – it was a fun, lighter part of the story but again, I felt it didn’t intrude on the main tale.

I did pick what was happening about two thirds of the way through – I felt some of the clues were kind of obvious, just in the placement of seemingly random conversations in the book more than anything – I suppose the villain was fairly one-note but [redacted] was a sociopath so I wasn’t bothered by any lack of nuance there.  I guessed Laura’s secret very early but that did not detract from the emotional resonance at all.  There was perhaps one thing I would have liked covered off/made more explicit but to say more would be, I think, too spoilerish.   Even so, near the end, things took me a little by surprise.  I suppose they shouldn’t have in the circumstances but the story fell out really in the only workable way and I appreciated that you kept it real.  Sure there were SEALs and private security people and various law enforcement personnel doing fairly spectacular things from time to time in the book, but I put that in the “heightened reality” category rather than “unbelievable”.  I think it was because the rest of the story had that realism, I was able to enjoy the near-superhero -ness of some of the characters – but even then, I felt you kept them from straying into “ridiculous-land”.

There were times, more particularly toward the end of the book where I felt some things were a little rushed.  I tried to find an excerpt to demonstrate what I meant but they were all too spoilerish.  It wasn’t a huge deal but those bits were a little less smooth and polished than the rest of the book.

There aren’t that many romance novels which feature a non-white hero and I appreciated Javier’s ethnicity was built into the story – neither fetishized or ignored.  So too was Laura’s Swedish connection.  I think you have a knack for writing with cultural sensitivity (it was something I particularly appreciated in Naked Edge as well).

I can rely on you to provide a cracking good read with believable and diverse characters, deeply romantic and emotional.  While I felt there was a bit of telegraphing in relation to the villain, Striking Distance is a winner. I give it a B+.