You are a Lambda Literary award winning author.   It says so right on the front of your book!   I've also seen your name cited many times when readers recommend lesbian romance.   Stepping Stone is the second Kallmaker I've read and it won't be the last. 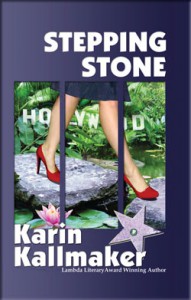 The story opens with Selena Ryan, a high-powered movie producer who is looking to cast her latest project, a quirky independent film.   She has her eye on Hyde Butler, an up and coming action star, for the lead.   Hyde is charming and handsome, sort of a Bradley Cooper type but with indie cred.   I appreciated the inclusion of this straight male character who is a thoughtful, reflective actor, not an unlikeable Hollywood playboy.

With the main star signed on, Selena must fill in the remaining roles.   She's still smarting from a painful breakup with Jennifer Lamont, a sultry bisexual (?) actress.   Jennifer wants to play Hyde's leading lady, and unfortunately, she's perfect for the part.   Selena sets aside her personal reservations and allows Jennifer to join the cast.   This is a typical move for Selena, who always puts business first.   Selena's unresolved feelings for Jennifer make up a solid portion of Stepping Stone, perhaps too much.   This sexy ex-girlfriend isn't a cookie-cutter villainess, however, and it's hard to find fault with such a well-rounded female characterization.

But where is Selena's true love?   Never fear, the reader is introduced to struggling actress Gail Welles in the first few chapters.   Gail and Selena know each other in passing because Selena frequents the café where Gail waitresses.   In a "cute meet" that doesn't quite fit the sophisticated story, Gail spills Selena's lunch on her lap.   Oops.

Despite Selena's wealth and power, Gail is the stronger character.   Selena loses points because she is too hung up on Jennifer, an ambitious (but talented) actress who is obviously sleeping her way to the top.   In the meantime, Gail is trying to make it the old-fashioned way, by working hard.   She's living from paycheck to paycheck, hustling for tips, and busting her butt at casting call after casting call.   Gail is a character actress, not a lead beauty, like Jennifer, so she gets few nibbles.   When her break comes, it's not because she spilled food on Selena Ryan.   A gay personal assistant notices Gail at an audition and mentions her to Selena as a lesbian actress with "a face."   This is an affirmative-action sort of maneuver, and it seemed not only plausible, but indicative of strong sense of community in gay Hollywood.   Gail earns the final spot in Selena's movie and proceeds to knock everyone's socks off with her acting skills.

I rooted for Gail, and for the supporting cast as a whole.   The filmmaking details were fascinating to me, perhaps because I already have a strong interest in the subject.   I took several film studies courses in college, as well as screenwriting and even a beginning acting class.   All of the behind-the-scenes stuff in Stepping Stone added to the story without getting in the way.

What didn't work for me, ironically, was the romance between Gail and Selena.   I was totally invested in them as characters, not so much as a couple.   They spend very little time together on the page.   RRRJessica wrote a recent post theorizing that Kristan Higgins is a women's fiction author, and her thoughts reminded me of this book.   Although it read more like dual-perspective lesbian fiction than romance, I enjoyed Stepping Stone very much.   B+