Steampunk is that subgenre I want to love, that I think has so much potential. Unfortunately, we have a rocky relationship. I’ve attempted to read too many novels in which the steampunk trappings are superficial — put a pair of goggles on someone, mention an airship, and have someone drink some tea seem to be all that’s required. It can be disappointing. 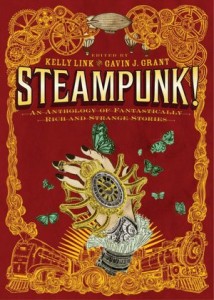 This anthology, however, spans the gamut of what steampunk can offer. From the South Pacific or ancient Rome, it takes us to places beyond the traditional Victorian England setting. Some stories take place in the modern day; others in the far-flung future on an outpost-like planet. In total, Steampunk! collects twelve stories and two short comics. For the purposes of this review, I’ll only be covering the included short stories simply because my review copy mangled the comic formatting so badly I could barely follow what was going on.

“Some Fortunate Future Day” by Cassandra Clare
The opening story is surprisingly creepy. The protagonist is a teenage girl who’s been living alone for some time. Her father went off to war, and she has no idea if he’s ever coming back. The only thing keeping her company in that big, empty house are the automatons her father made for her. That is, they did until the day an injured soldier comes crawling out of the forest and into her garden.

I thought this story did a great job showing how the innocent can transform into something menacing. It starts off on a normal, if melancholy, note but as it progresses, the tone becomes increasingly ominous. Things that seem harmless transform into the creepy and macabre. In the end, the protagonist — for all her faults — is a pitiful person, left alone and caught in a self-destructive cycle. B

“The Last Ride of the Glory Girls” by Libba Bray
My favorite story of the entire anthology, “Last Ride” takes place on an outpost planet, proving that even a sci-fi western can embody the heart and soul of steampunk. This tale is about a young woman who left her religious fundamentalist home and sought her fortune as a gifted tinkerer of technology. First, as a watchmaker’s apprentice, then as part of a investigative task force, she later goes undercover with a gang of female outlaws who rob trains courtesy of a gun that can stop time.

This short story reminded me of why I love Libba Bray’s writing and makes me want to give Beauty Queens another try. The strong voice of the narrator combined with the female outlaws and a heroine with a strong technological bent, it features so many of my favorite elements. I also loved how it interwove the present-day plot with the past events that drove the heroine to her present circumstances. A-

“Clockwore Fagin” by Cory Doctorow
I’ve heard a lot about Doctorow’s work so I read this story with interest. It tackles the disabled orphan trope of many a Victorian story, portraying children who’ve sustained injuries (lost limbs, lost extremities) from working on various forms of steampunk technology and are sent to an orphanage under the care and guidance of an abusive monster. The main story gets going, however, when a new orphan arrives and faces their caretaker head on.

I won’t say that this isn’t an interesting story nor will I say this isn’t a well-written story. It’s both of these things. But for all that, it left me feeling ambivalent. B-

“Hand in Glove” by Ysabeau S. Wilce
What’s a steampunk anthology without a mad scientist story? This story features a female detective who struggles not against sexism but against skepticism over her style of investigation — one that utilizes forensics (e.g. fingerprints and evidence) over beating confessions out of suspects (who, past a certain point, would admit to anything to make the pain stop). Her rival, the golden boy of the precinct, has just caught the perpetrator of a series of brutal stranglings. Our heroine, however, thinks he’s gotten the wrong guy because none of the evidence supports it but no one will believe her. Despite this, she won’t stop her own investigation because she refuses to let an innocent man hang.

This story was entertaining and over the top. It treaded just barely on this side of ludicrous and made it work all the more because of it. Overall, I thought it was a good story but the ending left me unsatisfied because it lacked that comeuppance of the golden boy rival for mocking the heroine. I admit I prefer that in my stories, realistic or not. B

“The Ghost of Cwnlech Manor” by Delia Sherman
This is the gothic offering of the anthology, complete with absent-minded heir of an established family, a young local woman who becomes the housekeeper, and a ghost who knows the location of the family treasure. Again, another well-written story but not particularly exciting. While I liked that the story didn’t walk the well-trodden “housekeeper falls for heir” storyline, I wish there’d been a little more life to the narrative. As far as I’m concerned, the best part of the story was the ghost. Poor thing. I’d be annoyed too if the person I’d been trying to reveal the location of the family treasure to completely explained away my existence and wouldn’t acknowledge it because he was a man of science. C

“Gethsemane” by Elizabeth Knox
Chronicling what happens to the denizens of a South Pacific town before a volcanic eruption, this is one of those stories where I knew it was referencing something while reading it. Unfortunately, not knowing the what it was actually referencing, I suspect a lot of the context went right over my head. I never connected with any of the characters nor cared what happened to any of them. Perhaps if I’d been familiar with the reference/event beforehand, my initial experience would have been different. As it is, my reaction can only be described as “meh.”C-

“The Summer People” by Kelly Link
In addition to being what I consider a characteristic Kelly Link story, this is also one that pushes what steampunk can be. More magic realism than outright genre SFF, it’s about a girl whose female ancestors have taken care of the local faeries for generations. The steampunk comes in with the faerie inventions that they bestow on their caretakers and people they like.

I liked “The Summer People” more for the ideas and concepts it introduces than for the feelings it left me. In the end, it’s about escaping the burdens parents leave their children and while that’s something I can understand, I also don’t like that often times in stories it means finding someone else to take your place. Sure, I’d like to think the replacement would be more willing and happy to do so, but there’s a part of me that dislikes a character for doing so. C+

“Peace in Our Time” by Garth Nix
I have a feeling this story is one that only Garth Nix fans would enjoy. While I thought the technology portrayed in the story was great, an example of how versatile steampunk can be, I thought it was depressing and there were parts of it I could not understand. I think it might have been better as a longer story. D

“Nowhere Fast” by Christopher Rowe
In a future where technology has broken down and the U.S. is divided into sectors, a group of teenagers meet a guy with a car. And I use the term “car” very loosely. But given the state of technology, this is a big deal that causes a ruckus among the local people and law enforcement. When I finished this story, I felt like it was an extended set-up that finished just as the main narrative was about to start. Disappointing. C-

“Steam Girl” by Dylan Horrocks
Similar to Kelly Link’s story in which it’s set in the modern day, “Steam Punk” tells the story of a high school outcast who befriends the new girl, another outcast who tells the awesome adventures about a young woman named “Steam Girl.” What I liked best about this story is that it can be read two ways. It can be about a girl telling stories about an alter-ego that lives an amazing, adventurous life to make her real life in high school bearable. At the same time, though, I think the story plants enough hints to make you doubt that and wonder if she is in fact telling the truth and is really from an alternate universe where she used to be Steam Girl. The second option is more outlandish, I’ll give you that, but wouldn’t it be nice to imagine that was true? B

“Everything Amiable and Obliging” by Holly Black
The fantasy of manners offering of the anthology, Black’s story tells the tale of a young woman who’s been recently orphaned and taken in by her aunt. But unlike other stories where the relatives hate her or treat her badly, this aunt actually wants her to marry her son. Now our heroine would like nothing more than this as well. Unfortunately, he doesn’t seem aware of her existence which is a change from their childhood. Things get further complicated when her aunt’s other child, a daughter, falls in love with one of the house robots. Awkward.

This is my second favorite story of the anthology and one I wish could have been longer. Not because it needed to be longer but because I wanted to see more of Amelia and Valerian. That said, I felt horribly sorry for the robot who’s become the object of the sister’s affections. I suspect that fate is not a good one for him. Robot or not, it can’t be a good thing to be wanted solely because you’re incapable of saying no! B+

“The Oracle Engine” by M.T. Anderson
I suspect the final story of the anthology is one that is simply not for me. A reader-story mismatch, if you will. It puts a steampunk spin on ancient Rome, which I like, and portrays a revenge tale, which I normally like even more, but I admit I found it boring. It’s written in a semi-historical voice (it’s meant to be a translation), but it just didn’t work for me. C

While I’m not sure this anthology is worth the price of hardcover, I liked that it contained a variety of stories set in different places and time periods as well as spanned many different genres. When I think of an anthology, this is the sort of variety I expect. I also like that there was good representation of women and minorities. And once again, I do think “Last Ride of the Glory Girls” is not a story to be missed and the anthology is worth checking out for that story alone.