REVIEW: Stay With Me by Elyssa Patrick

I’ve been reading a ton of New Adult books lately (probably because of the sheer number of them that are being published), but your new book, Stay With Me, is one that stood out to me as particularly polished, featuring interesting characters and one of my favorite hero tropes: the Caregiving hero. 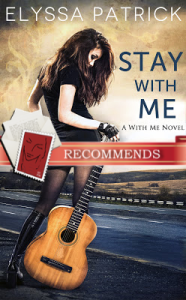 Hailey Bloom has been a star her entire life. She sings, she dances, she’s instantly recognizable all over the world (although presumably not for “twerking” a la Miley Cyrus). She’s decided to leave it all behind and go to college. It’s the first time in a really long time that she’s done anything at all just for herself. She didn’t consider the feelings of her controlling stage mother, her publicists, her fans, no one. She’s doing this for herself. But she’s having trouble getting over being “Hailey Bloom”.

When she arrives at Green College, she finds that the guys want to be the first to have nailed Hailey Bloom, and the girls don’t much like her because she’s famous and pretty, and all the guys want to be able to brag about having sex with a star. Her classes are much harder than she expected and her teachers assume that she’s been given everything in her life, so they are harder on her than she thinks is fair. One night, at a party, she steps outside to take a breather from being constantly scrutinized and finds herself on the back deck with Caleb Fox.

Caleb knows exactly who she is, but doesn’t treat her like she’s anything other than a pretty girl. He’s not star-struck, he’s not gushing, and he’s not making any particular moves on her. He’s kind, and offers her his jacket when she’s cold, and shields her from the interest of other guys who come outside looking for her. Make no mistake, he’s definitely attracted, as is Hailey, but he’s not pushy, and she likes that about him. But Hailey is at college to get a serious degree, and has no time for romance. She does share a kiss with him, but leaves the party directly afterwards.

Not one to give up on a girl who he thinks is a lot more than her public persona, Caleb decides to take action the next day when he literally bumps into Hailey at a farmers market, spilling tea on her. He takes her to his house to give her a dry t-shirt, and they end up having a very romantic encounter in his kitchen. Soon Hailey has met Caleb’s younger sister, who is also a freshman, and who strikes up an immediate friendship with Hailey, as well as most of his friends. And Hailey and Caleb begin a tentative and very sweet romance. Caleb woos Hailey with patience, care and respect. But when Hailey’s mother decides to snatch Hailey back into the limelight by telling secrets, Hailey’s instinct is to push away her love and the friends that she’s made. Will Caleb allow her to reject what they’re building? And will he be horrified when he learns more about Hailey’s past?

Because we are friendly on Twitter, I’ve read a number of books by you, and I think that your voice is particularly suited to New Adult. I found Hailey to be an interesting character, definitely damaged by the price of fame, but with a level of sweetness that made her likeable, even when she was pushing away the few who cared about her. Caleb is a dreamy beta hero. He’s not dominating in any way, but he’s determined to woo Hailey, and will not allow her to push him away. I found their romance to be quite charming.

My only complaints about the book would be that Caleb in particular is surrounded by a huge cast of friends, who clearly were sequel bait. And at times, I had a hard time keeping them straight. I also felt like I was missing a big confrontation between Hailey and her mother. I would have liked to have seen Hailey defend herself more against her mother, but I also thought her reaction rang true to her character. I just wished that Mommy Dearest had gotten what was coming to her.

Overall, I found Stay With Me to be a sweet and charming New Adult book that I enjoyed every moment of. I’m really looking forward to the next installment of the series. Final grade: B+.