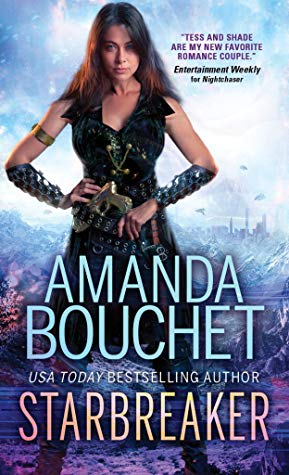 Nightchaser, the first book in the Endeavor series, was one of my favourite books of 2019 so I was hankering to read the follow up, Starbreaker, to find out what was next for Tess, Shade and the crew of the Endeavor. (But, let’s be honest here, mostly Tess and Shade).

Starbreaker is not a book which stands alone. While there is enough in it to remind readers of the major plot points, it is designed to be read together with Nightchaser. I found myself reading the end of Nightchaser to refresh my memory actually.

This book begins only a few days after the end of book one. Tess and Shade are back together but she’s still smarting from his betrayal and his past as a Dark Watch Bounty Hunter so they have some work to do relationship-wise.

“The rage is justified.” I slid her a slow smile. “I can work with lust.”

Her lips twitching, she swatted me with a soft backhand across the chest.

“And light slapping,” I added.

Tess laughed. The fading light didn’t hide the electric-blue spark of interest in her eyes when they met mine across the center aisle.

“Who gets to do the slapping?” She looked eager as hell, and I grinned as I flew us over the hazy dark-green jungle, relieved we were done arguing.

“I’m a firm believer in equality. I say we take turns.”

Merrick has joined the Endeavor crew – a very welcome addition – but Jax, Fiona and Tess are still nonetheless reeling from the loss of Miko and Shiori.

Tess and Shade have made a secret deal to provide six bags of her A1 blood to Dark Watch General Nathaniel Bridgebane (aka “Uncle Nate) and have a rendezvous to meet him in a few days. If they don’t show, Bridgebane will arrest either Mareeka or Surral, Tess’s surrogate parents from Starway 8.

The crew of the Endeavor have also been tasked with a rescue for the rebellion by Leader Loralie Harris. The first part is to meet Daniel Ahern on Korabon to get some intel in order to extract his wife, Reena, from the imperial prison on Starbase 12 – the one where the Overseer himself has an office. It’s a very dangerous place and Tess is very unhappy that they’ve been set this task with so little detail or intelligence or preparation time.  This aspect of the story never really goes anywhere however. I ended the book still wondering why they’d been given so little information and placed at such risk so quickly.

The action however ramps up fast as things on Korabon get dicey when they’re leaving the planet. There is a massive price on Shade’s head and all of the Endeavor crew are wanted criminals. Drawing the attention of the Dark Watch at all is a Very Bad Idea.

I don’t think it’s a spoiler to reveal that they do manage to exit Korabon with only limited damage. There follows a short idyll as Tess and Shade travel to Reaginine to meet with Bridgebane. They have a couple of days there to explore the tropical resort and each other. As a romance reader I liked the time they spent on Reaginine but at the same time, it did reduce the narrative tension. The action picks up again afterwards though and, for the most part, does not stop.

There are big reveals (the biggest one wasn’t really a surprise to me; I thought the foreshadowing was pretty clear), extra crew members added and daring escapes which had me on the edge of my seat as I read and meant that I finished the book in only 2 days.  If Endeavor is kind of like Star Wars, Starbreaker is the Empire Strikes Back of the series. The rebellion is in trouble and things look very dire but I’m happy to report that the main romance is still intact by the end of the book even though it had some rough moments to get there. Unlike Empire however, Starbreaker isn’t better than the first installment. There were a couple of things which didn’t quite make sense to me and a couple of dull spots where Tess and the crew were involved in busywork. It was important busywork but I don’t know I needed all the information about food distribution on the mooncamps of Demeter Terre. And, while Tess and Shade had some rough spots, they were never seriously in any danger of splitting up, so from a romance perspective, it was pretty low conflict. The tension and the stakes at least as far as the romance were concerned were much higher in Nightchaser. That said, it’s not like I actually need any conflict between Tess and Shade. In retrospect I think my disconnect with parts of it was that what there was, beyond sorting out their feelings about the events of Nightchaser, felt a little manufactured. I think I’d have been just as happy to see them working together to bring down the Overseer, with brief interludes of intimacy.

Some of the things which confused me a little narratively as I was reading were resolved at the end fortunately but how the good guys are going to pull a victory out of the hat by the end of the series has me scratching my head a little (probably why I’m a reader and not a writer). I am interested in what will (hopefully) develop between Jax and Fiona and I’m looking hard at Merrick and Sanaa too – basically, I’m such a romance reader that every couple I can put together needs a HEA – what is that saying about hammers and nails? :D

Shade is a lot more emotionally open in Starbreaker; he’s all in for Tess, something I loved but, because I’m contrary, that I nevertheless found a little sappy occasionally. Tess remains awesome; I especially enjoyed her puzzling her way through some very complicated feelings about Uncle Nate – and she’s not all the way done yet -if she ever could be – by the time the book ends. I do love that Tess is clearly the captain of the Endeavor and that Shade is happy to defer to her. He stands at her side to support and protect and help in any way he can but he does not take over or impose his will on her; she’s the leader. Shade is in no way subservient but he has no difficulty in acknowledging her leadership and authority, except when it comes to sex where Tess is more than happy for him to take the lead.

The last third in particular of Starbreaker is a ripper. The action is tight and matters are very tense. There are new reveals and twists and turns to complicate matters for both the Endeavor and the rebellion, though I was left with a couple of questions about the mechanics of some things. For romance, Starbreaker gets a B, for action/adventure, a B+. And, in any event, I recommend it.

→ Kaetrin
Previous article: REVIEW: A Corruptible Crown by Gillian Bradshaw
Next Post: What Janine is Reading in Winter 2020