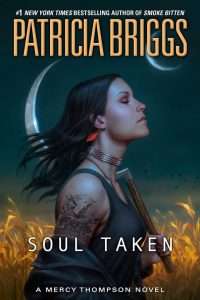 Soul Taken mostly doesn’t reference the events in Wild Sign and certainly not in a spoilery way. But it’s clear that this book takes place at around the same time as or just after the epilogue in last year’s release.

Something that happened in Wild Sign meant that Sherwood Post’s memories have returned and given who  he is, that could mean significant things for the Columbia Basin Pack. While trying to agree on a plan of action where no-one gets killed, Marsilia mysteriously appears to Adam and Mercy and tells them Wulfe is missing. She charges the pack to find him, warning that their alliance and reputation will suffer unless they move quickly to find her Wulfe.

An old foe is back to cause trouble for the pack and Mercy and an ancient sentient artifact is on the loose in the Tri-Cities, (mostly) targeting those with small magic.

Like most things that encounter Mercy’s and her unique magic, the artifact, the Soul Taker, takes a special interest in Mercy and this ramps the stakes up even higher.

Something is going on with Warren and Darryl and Adam has given them only a couple of days to sort it out or fess up to him before he takes more decisive action as it’s causing unrest within the pack.

Also, Tad has a girlfriend and Zee may be taking too much of an interest in the relationship for her safety.

Some of the storylines don’t really go anywhere no matter how tantalising they initially appear to be. At least one of the threads turns out to be not all that much and was set up to appear much bigger than it was. It felt a little bait-and-switchy. And speaking of bait – at least one of the threads was mostly sequel bait because no matter the promising start, it fizzled out here even though there is clearly much more to tell – eventually.

But the main story – that of the Soul Taker – is tense, spooky, scary and exciting. For added bonus points, Adam and Mercy work closely together – often just the two of them – to save the day and honestly, that’s just the best. I love the way that the series has evolved to the point where Adam and Mercy tend to work together more than apart. I don’t need for Mercy to be separated from Adam to be heroic or to be the star of the show. She can (and does) shine just fine with Adam by her side.

I love the way that Mercy has changed the pack and the hints about what that might mean. I was pleased to see that Mercy’s relationship with Mary Jo and Honey continues to improve and her place within the pack is becoming more settled.

I adore the way Adam is 100% Team Mercy. He’s all in for her and it’s something that touches her deeply and still surprises her a little when it reveals itself in big ways and small. (Mercy is equally 100% Team Adam and her love is just as fierce.)

There’s even a chapter from Adam’s POV which – yay. Although, it’s mostly Mercy which – also yay.

For extreme arachnophobes like me however, there are a couple of creatures early in the story I could have done without. Seriously, what is it with spiders and UF/PNR? (Don’t tell me; that was rhetorical.) I do not like this trend. *shudders*

The after-effects of Mercy’s interaction with the creature were such that I really thought it would and should have had more lasting impacts, given Mercy’s history.

I’m pleased to report that there’s no sexual violence in this book, though there’s plenty of other violence and torture and gore. It was one of my big criticisms of Wild Sign and it was a relief that sexual violence was not a theme of Soul Taken. I don’t complain about the other kind of violence – if I didn’t want to read it, I wouldn’t choose this genre.

The entire book takes place only in a few short days – the stakes are high, the danger is intense and solutions risky. Mercy and Adam do have little bits of time for intimacy and other softer emotions which serve to give the reader a bit of an interlude between the peril and also build on their HEA.

While there were those dropped or less than satisfying threads, there was also plenty of Adam and Mercy. I really liked the way that both characters had important work to do, as a team and apart, and the way they worked together to protect their territory from a genuinely scary foe.