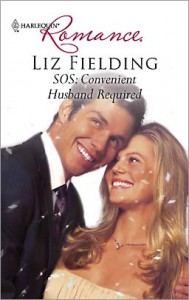 You have been one of my favorite Harlequin writers for several years now.   Following up on an online recommendation, I picked up one of your books and was hooked. I’ve read all the ones that are available in ebook format and some that aren’t, and several of them are keepers which I reread over and over. I haven’t loved every single book, but I’m never sorry I spent the time. You have a knack for taking general romance-novel and specific Harlequin tropes and doing something fresh with them.

And this book has plenty of general and specific tropes. The hero is a Billionaire. There is a baby (not secret, but definitely a baby). There is a Marriage of Convenience. There is a made-up dangerous country that almost swallows Our Hero. But in your hands, I barely notice that you are hitting the traditional marks, because I am too busy enjoying the setting, the characters and the interaction between the hero and heroine.

The book opens with parallel disasters for our heroine and hero. May Coleridge has just been informed that her late grandfather’s will contained an old entail which requires the heir to be married by 30 in order to inherit. May is 29 years, 11 months, and 1 week in age, with neither fiance, boyfriend, nor match.com blind date in sight. At nearly the same time, Adam Wavell walks into his office and discovers that his irresponsible sister Saffy has deposited her baby there, leaving nothing but a diaper bag and a note begging him not to tell anyone except May, who she insists will help out.

Adam and May fell in love when they were in High School, but Adam was from a “sink estate” (I know council estate, but I had to look that term up) and May was a Coleridge of Coleridge House. Just as their romance was progressing nicely, her grandfather, who was also her guardian, discovered them and went ballistic. He humiliated Adam while May hid in her room and watched through the window. Adam always assumed that May rejected him because he wasn’t good enough, and for her own reasons May didn’t contradict him. So even though they live in the same smallish town, they avoid each other like the plague.

But of course, the baby brings them together. Adam needs help taking care of her (for plausible reasons he can’t call an agency) and May is famous for helping stray animals, birds, and people. This being a Harlequin Romance of the sweet variety, they come to an agreement to enter into a Marriage of Convenience, which will allow May to take care of the baby while Adam does his Billionaire thing, and marriage to Adam will save May’s inheritance and the livelihoods of the people who depend on her.

So far, this is pretty run of the mill, even ho-hum. But what lifts the book well above the ordinary for me is the characterizations of Adam and May and the way their shared and separate pasts create their present. Adam may be a successful businessman, but he has stayed in his hometown and he can never escape feeling that his roots are showing. His father had form, his mother was "no better than she ought to be," and his sister barely escaped juvenile hall for dealing drugs. He has never stopped being attracted to May, but she is a symbol of his pre-tycoon failures and humiliations, and the two coexist very uneasily in his mind and heart. You do a great job of showing how Adam plots revenge in his head at the same time that he is fighting his attraction when he is with May. He reminds me of a Catherine Cookson hero, but way less dour and of course more tycoonish.

May is even better than Adam as a character. She falls into the mousy, plain heroine category, but she isn’t a beauty hiding behind a pair of glasses. She really *is* mousy and dumpy and badly dressed. She turned down her only viable marriage option to nurse her grandfather in his last decade, and she has become the town’s well-bred spinster lady. But she is no doormat; within the confines she has accepted, she has a respected public role and a modest but thriving business, and she is reasonably content until she hears about the entail. She knows that she is still terribly attracted to Adam, but she doesn’t jump at his offer. She accepts him, of course, but in a way that earns his respect. And she takes steps to fix Saffy’s life using tools that only she has. And finally, when she spends money she doesn’t have to pay for her own wedding outfit (rather than letting Adam buy it for her), she looks great in it because it accentuates her good features and camouflages her bad ones, not because the bad ones weren’t really there in the first place.

So we have run of the mill plot and good characters. And the romance? It just rocks. I love the way these two interact, how they fight their attraction because they both believe it can’t ever work for them, and then how they eventually realize it can. Given the word limits inherent in the category format, it’s difficult to establish the characters and still have enough space to develop the relationship, so authors take different shortcuts. There’s the coup de foudre, the friends-to-lovers, the formerly lovers, the married but estranged, and so on. You employ the formerly-lovers scenario, but the particular class-conflict angle you use gives the formula an usual twist and more depth than usual; in your hands it is extremely well realized. It’s not just that Adam was working class, his family really was a mess. And May was gentry, but her late mother was a rebel and May suffered from both her mother’s rebellion and her grandfather’s obsession with propriety. As adolescents, both May and Adam saw in each other their own inability to fit into their backgrounds and responded. But you make it clear that they also responded to each other as individuals, for their own unique characteristics, not just as mirrors for each other.

There were a few missteps in the book. First, I hate Las Vegas, so I found the ending section the opposite of romantic, but that’s really an it’s-not-you-it's-me problem. Second, I assure you that Brits who are flying to Las Vegas as quickly as possible do not fly eastward. They do gain time on the journey, which is crucial to the plot, but they do it by flying west. Third, the red herring of the Other Man for May added little to the development of the relationship and used up precious words. And finally, Ms. Fielding, I’m sorry to say that I’m starting to have a love-hate relationship with your writing style. I love the understated wit, the clean writing, the flashes of humor the characters show in their internal monologues. But I feel as if the number of sentence fragments has gone through the roof. Once in a while can be very effective, but too many subject-less sentences and I start picturing George HW Bush.

Those nitpicks aside, I really enjoyed this book, and I’m looking forward to your next one. Especially if it’s set in your Melchester-Maybridge world.   B+