I am not a science fiction fan. I am not a futuristic fan. I think it is because I feel like I am not smart enough to understand the concepts without pictures and light sabers twirling around. Science was never my strong point and the few times I’ve dipped my toes into the futuristic world, I was confused after the first five minutes of reading. The fact that this is billed as a science fiction adventure was enough to place this book in the do not read pile. I mean, it isn’t even a romance, right? Good thing for me, I have some adventurous reading pals. 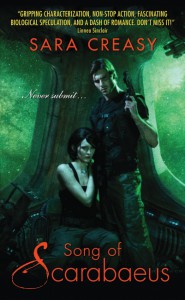 Angela James was reading an ARC of the follow up to this book at the Tools of Change conference. (I was reading Sarah Maclean’s Eleven Scandals) Both of us were engrossed in our books at various time. She encouraged me to read the first in the series. I hesitated because, well, it’s science fiction adventure (I’m still scarred by my attempts to read Green Mars by Kim Stanley Robinson). I put it on my TBR list and then kind of forgot about it. Then it was nominated by readers for the Crossover finalist at the DABWHA tourney. I bought it, read it, loved it, and am now anxious for book 2.   I say all this as preface so that readers who are a little apprehensive of the SFF books can know that I am with them and this book still worked for me.

Part of the fun of reading this book is discovery and so I’ll try to be as vague as possible while still talking about why I found this story appealing. Edie is a half Talasi, an outcast amongst the Talasi tribe whose old ways refused to accept diluted blood. Ignored and forgotten, Edie was easy pickings for Crib Colonial Unit, a colonizing branch of the reigning intergalactic political power. The Talasi’s land, Talas Prime, is filled with this neuroxin (aka poison) and the early Talasi were able to manipulate their genetic code to accommodate the toxin. The downside is that any Talasi away from their home planet must have a ready supply of neuroxin.

At the CCU, Edie was taken care of, even fostered. She developed into the leading cypherteck for the CCU BRAT seeding program. Essentially (or at least in my own understanding) Edie was a bio engineer who helped to colonize previously uninhabited planets using engineered seeds that are shot from the sky into the land of the planet. Edie has a perfect record of 18 out of 18. In other words, every planet she has worked to seed has germinated and her older settlements are now taking in new humans. The BRAT seeding program was supposed to work with only uninhabited or dead planets but one planet, Scarabaeus, was not dead and the BRAT seeds that were shot down there lay dormant.

A fringe group of space pirates kidnaps Edie in order to get her to germinate these Scarabaeus seeds for fringe colonies. Fringe colonies depend upon the BRATs from CCU and must give a great portion of their harvest to the CCU, thereby rendering the fringe colonies essentially toothless. If Edie can germinate seeds that are outside the CCU BRAT system, the fringe colonies would not need to depend on CCU and could, possibly, flourish on their own.

Even though Edie was cared for at CCU, she never felt fully invested in the program. She often thought that the BRAT seeding system was wrong, that it was changing eco systems that did not need to be changed or, if changed, would affect the planet adversely. Part of Edie’s distaste for changing the planet’s environment was connected to her sense of displacement. She never had a home, a tribe, a family. She was perennially the outsider. She did not want to change worlds to benefit humans if it meant displacement of someone else.

To protect Edie from eco rad terrorists and to prevent her recapture by the CCU, the fringe group “frees” a serf named Finn. Finn was a former soldier and described as “a roughly handsome brute, years of labor etched into his face.” To ensure Finn’s loyalty to Edie’s well being, the group hires an infotek to jack into Finn’s brain and create a biological leash to Edie. If he is farther than a couple “klicks” from Edie or if she should die, a bomb in Finn’s brain will detonate. Further, the leash is providing a bio feedback of sorts from Edie to Finn meaning that any spikes in Edie’s emotion (including arousal) can result in pain to Finn.

Edie does not want to be responsible for someone’s death and Finn wants to live, more than anything. They have to figure out how to sever the leash, obtain a supply of neuroxin, get away from their kidnappers, get Finn to freedom and Edie to…well, they aren’t sure.

In the beginning, Edie recognizes that there are injustices in the way in which the world is run. She recognizes that it is unfair to the fringers to be so dependent on the CCU. She dislikes the direction in which the seeding program is going, specifically the colonization of inhabited planets (not inhabited by people, but with life forms). Failed seeding programs turn planets into mash, essentially creating a meltdown of the ecology and rendering the planet useless for anything. But other than running away now and then, Edie hasn’t done anything about it. During her capture and with her exposure to Finn and others, Edie begins to see that there is something that she can do to help liberate people from CCU.

Finn is more of enigma because we don’t really get scenes from his point of view. What we see of Finn is filtered through Edie’s point of view. But we get enough to know that Finn yearns for freedom. He fought for freedom and he was captured and enslaved. He realizes that Edie isn’t his captor but a victim and he is determined to help her and himself.

The stakes are very high in this book and the plot drives the reader forward but the characters stick with you. Edie, in some ways, represents the idealistic person that Finn may have left behind. She represents what he was fighting for in the first place. Conversely, Finn is a solid connection that Edie has missed and wanted her entire life. They slowly fall in love, so much so that their feelings for each other imperil their goals for freedom.

As a romance reader, primarily, I felt that this story was rich, not only in setting, but emotion. Edie’s real horror at seeing the leash used against Finn, for example, was palpable, as was her longing for him. I also appreciated the way in which Edie and Finn worked together as true partners. Finn took care of what he was good at – planning, fighting, soldiering, and Edie took care of what she was good at – interfacing with bio based tech. Edie and Finn are a team I want to follow for a long time. Strong B+

→ Jane
Previous article: DABWAHA Schedule and Deadlines
Next Post: REVIEW: Once Upon A Time in Space by Heather Massey