REVIEW: Son of a Gun by A.M.Riley 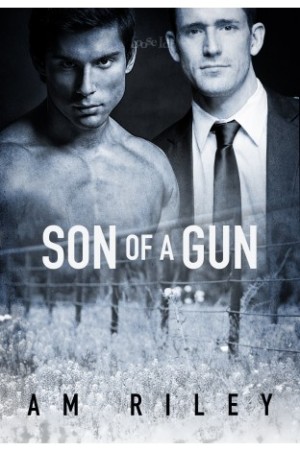 Stefan Sanchez’s number one reason to flee Boerne, Texas, twelve years ago, was closeted deputy Chet Blain. Since then he has lived in Los Angeles, become a successful author of children’s books, and managed his sexual relationships with a certain cool cynicism.

When Stefan returns to Texas for the funeral of his best friend, Tommy, he is confronted by painful memories: His infamous father, shot as a traitor, his alcoholic mother, and Chet, who seems to want to start their old, painful relationship all over again. Added to this is a missing widow, drugs in the trunk of his rental car, and a hunky Secret Service agent who seems determined to make Stefan’s business his business.

It all ends in a mad chase across the infamously haunted Devil’s backbone where ghosts from the past and personal demons in the present all conspire to give Stefan a chance to close the book on his childhood forever…or die trying.

Note: This book was previously released by another publisher but has been re-edited and substantially rewritten for Loose Id.

When last year I saw the second edition of this book I hesitated to buy it. I was not sure what “substantially rewritten” meant for this book, and more importantly, except for adding more certainty about the romantic angle of the story I did not think I wanted to see this story rewritten.

I finally caved in. I am still not sure how substantially the book was reedited and rewritten (I did not reread the first edition before starting this one), but I am very pleased to report that the ending is now definitely leaning towards possibility of new romance for the main character. Please beware though – the story was not a romance in its first incarnation and it is not a romance now. It is a gay mystery and at my most generous I can grant that it has some romantic elements. And now I am pretty certain that we are leaving Stephan Sanchez with a good chance of starting a new romantic relationship that hopefully is happier than the one he had in his past.

But let’s start from the beginning. As the blurb states, Stephan is a successful writer of children’s books who returns to Texas for the funeral of his best friend, Tommy. Stephan and Tommy grew up together, literally as close as brothers and their relationship in flashbacks is portrayed so well that my heart was breaking for Stephan more than once. Tommy belongs to one of the richest and powerful families in Texas – politics and law seemed to be their primary choice of careers for generations. Stephan basically grew up in their house and the family seems to call Stephan one of their own when he arrives for Tommy’s funeral.

Very soon Stephan notices that the circumstances of Tommy’s death are not as straightforward as he initially thought. His death was likely not an accident, and Tommy’s widow Samantha (Sammy) left town instead of being present at her husband’s funeral. To Stephan’s absolute dismay he learns that police suspect Sammy of killing her husband. Considering that she was his second dearest friend and a childhood’s playmate, he does not believe that she was capable of that. He quickly realizes that Sammy may be in danger and tries to find her before the real villains do. Meanwhile, there is a special agent named Evans who is present at Tommy’s family house, and whose agenda is not clear from the beginning, but who seems to want to take a very close look at Stephan and tries to stick very close to him. Finally, let’s add to the mix Chet Blain who is in charge of the local police. Chet is a very closeted guy with whom Stephan was in love for years, and because of whom he left town.

I thought it was very clear that events were going to get out of control very fast and of course they did. The story was very well paced for the most part – Stephan’s desire to find the truth, the villains’ strong motivation to stop him and hurt the innocents, all of this made for some excellent action. I have to say that when I was reading the story for the first time I could not guess the villain, not till the very end and when I was rereading it for the preparation of the review I did not remember. I managed to refrain from looking at the last page, which was hard, but I have to say I was fooled all over again. I mean there were not many candidates of course, but till the very end I thought that the main villain was the person who served as the main red herring. I am always pleased when this happens in the mystery.

What I also liked is that the rich and powerful in this book did not come out as stereotypes or caricatures at all. There are good people, bad people, hard-working people, a little lazy people amongst them – they felt like human beings to me and I liked that.

The main character Stephan Sanchez was great. The man tried to convince people around him and himself that he did not have a “heart of gold” and he was just a cynic.

“I get that. I am one of the good guys, Mr. Sanchez.”
“Now there’s a popular myth.” Stefan limped to the sink. “There’s no such thing as good guys. There’s only varying degrees of self-interested egotists. I’d be more inclined to trust you if you’d just fess up and tell me what you want.””

Maybe he was a cynic, but I personally had no doubt that Stephan also felt the injustices of the world very deeply, was ready to protect those who needed protection and could love a person who would be deserving of his love. I guess to me Stephan was the example of a “his actions speak louder than words” type.

One of the reasons I like this writer’s books so much is because at times she able to create a perfect blend of mystery and romance. In this book it’s not guaranteed that Stephan will continue his acquaintance with somebody whom he meets in this book – they are too busy saving themselves and other people from bad guys to have much time to get to know each other better here. But what they had, even in the first edition was enough for me because the story was mostly a mystery. I did want to feel a little more confident at the end that Stephan gets his chance at happiness and in this version I do.

The only thing that did not work for me all that well were the additions in which Stephan writes for kids, which were interspersed throughout this book. I mean, I understand what the writer was trying to achieve because Stephan based his characters on himself and Tommy, but I got enough of a feel for what his and Tommy’s relationship was like through the flashbacks. The parts of the kids’ book from his imagination became a little annoying after a while. It was not added when the action was happening, so I did not feel that it threw the pacing off much, but I still got tired of it eventually.

Still, I really liked it overall.