REVIEW: Something Different by S.A. Reid

Dear Ms. Reid (actually I’m just assuming your gender here — sorry if I got it wrong).

This is a self-pubbed book that you sent to Dear Author for possible review. I enjoyed the excerpt and it hit one of my buttons pretty hard (*love* stories about prostitutes or strippers — no idea why), so I figured I’d go for it. And I’m so glad I did. I loved this story. I never know why people choose to self-pub, but some aspects of the story might raise some eyebrows (they certainly raised mine), but overall, it was a fantastic story. 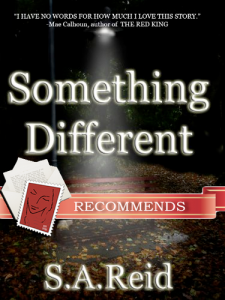 Michael is 34, has been married for 15 years, and has two kids. He and his wife very rarely have sex:

Michael couldn’t remember the last time he’d had sex with Frannie, and there were so many rules he was no longer tempted to try. Weeknights were out, she was too tired from housework and spin class and book club and keeping up with her favorite programs on telly. Sundays were a no-go; she tended to go out with girlfriends after church and preferred a nice long evening with the telly when she returned. That left Saturday, and then Michael had to be freshly showered, the kids had to be either asleep or out of the house, and Frannie had to be in the mood. The likelihood of all these factors coming together was about as favorable as a total eclipse. Once Michael had thought that as he grew older he’d get “past it,” as men used to say, and find himself as disinterested as Frannie. But now he was thirty-four and more frustrated than ever.

A colleague goads Michael into the rebellion of going to the local park, looking for a female prostitute. There James finds him and, after a bit of conversation, Michael takes James to a hotel where James sucks him off and fucks him. Michael and James establish a regular routine until James is attacked by another client. At that point, Michael houses James and pays for his medical bills and rehabilitation, all while dealing with specters from his past and eventually being honest with his wife and starting amicable divorce proceedings.

Most but not all of the story is told from Michael’s perspective. Honestly, it reads almost like a fable. There’s some telling rather than showing, especially of the backstory for both men, but it works with your voice and just pulled me through the story (of course, looking for some to excerpt, I couldn’t find any, so maybe there’s less telling than I thought). Michael believes in truth:

Michael modulated his breathing. This would be taking a chance. But he could withstand the truth, he knew he could. He could ask James to be honest and not fear it would break him.

“It’s about friendship. I think of you as a friend. What we did before – I’d like to go back to it, whenever you’re ready. But until then, I want you to stay here, James. Get better. Spend time with me. Unless … unless it’s too much. Unless you don’t think of me the same way.”

“I thought of you as a client,” James said softly. “Till you rang me up. Till I said I was out of commission and you asked if we were finished. I felt – I don’t know. I thought maybe it would hurt you, wondering why I disappeared. So I met you in the restaurant. Not because I expected you to help me. I just didn’t want to leave you in pain.” James took a deep breath. “I don’t deserve you as a friend.”

“I don’t deserve you, either,” Michael said. It was the most he could manage. There was more inside him, he knew there was, but it was like staring at the white digital page when he tried to write a piece of fiction. A disconnect that made communication impossible.

So part of the “fable” feel of the story comes from Michael’s own disconnect from his emotions, but that’s very well explained by his back-story and he comes out of it now and then and increasingly toward the end of the story. The “fable” feel also comes from the ease with which Michael and James fall into their life together and with which Michael and his wife break up. But it all fits with their established characters, so again, I went with the flow of it. And Michael’s insistence on truth and honesty means that there’s never any recriminations about James’ former profession. Both of them just take it at face value, but that’s in-character for both of them, rather than forced.

From the self-publishing perspective, I saw 4 glaring typos and missing punctuation (on two complete read-throughs) which is not bad. The formatting for ePub was a little off because the WHOLE book was one chapter, so it took a while to load on Stanza (“a while” being around 10 seconds, rather than instantly). And the cover is boring. But altogether, at a $0.99 price point, it’s utterly and completely worth it.

From the self-pubbed perspective, you also deal with topics that are potentially triggering and/or might not be acceptable at mainstream e-publishers. Those topics are potential spoilers, so click to see them:
[spoiler]Both James and Michael are the victims of sexual assault: James when he was 12 by his uncle, lasting a few years and Michael when he was 14 by his step-mother, lasting three years.[/spoiler]
Also, James has herpes and he and Michael have unprotected anal sex after they find this out. The unprotected sex made me REALLY uncomfortable, but I saw it as in-character for Michael at that stage in his personal development, so it sort of worked, even if it was a little strange to read. Once they have sex without both a condom AND lube, which just…no, thank you. I mean, I’m sure it’s *possible* but it’s gotta fucking HURT.

I don’t think I’m doing a good job of saying how much I liked this book. I really really did. It was both a romance and a coming-into-his-own for Michael and even a bit for James. And everyone gets their believable HEA at the end, so it left me with the warm fuzzies. You have a gift for characterization, the dialogue sparkled, I could see how Michael was changing and growing, and I was rooting for them both right from the start.

And a completely gratuitous excerpt because I just loved the description of Michael’s love for James:

Isn’t that an amazing way to think about love?

→ SarahF
Previous article: What Sarah was Reading in September
Next Post: REVIEW: Lord of the Vampires by Gena Showalter