REVIEW: Sold To The Enemy by Sarah Morgan

You’ve taken a number of standard fairy-tale and romance ingredients and turned them into something fresh and original in this book. I’ve always enjoyed your disadvantaged, yet plucky and intelligent, heroines, and in Selene Antaxos you’ve created a character that ranks for me with the heroines of Doukakis’ Apprentice, Twelve Nights of Christmas, The Prince’s Waitress Wife, and Sale or Return Bride. Selene isn’t badly off financially or an orphan, but her circumstances are pretty dire. 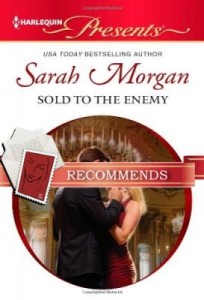 When we meet Selene, she is scheming a way to leave her isolated Greek island home and travel to Athens without her father finding out. Selene and her mother are virtual prisoners in a house that doubles as a fortress, victims of a man who insists on complete control over their lives in order to present to the world the picture of a perfect, virtuous family. He keeps them in penury and watches their every move, but Selene has turned a flair for creating handmade soaps and candles into a potential business opportunity. She uses her annual convent retreat as a means of leaving the island and approaching Stefanos Ziakas, who is her father’s enemy in business, but whom she remembers warmly because he was kind to her at one of her rare public outings. And it doesn’t hurt that he’s gorgeous.

Stefan is annoyed with his personal assistant for letting Selene in to see him, but his annoyance dissipates as he is intrigued and attracted to her. He hears out her business plans and decides to offer her the loan she seeks. Even more impulsively, he invites her to accompany him to a party that night. Selene can’t resist; she’s never been to a party where she can just enjoy herself, free from her father’s threatening presence. The only hitch is that she has nothing to wear, but Stefan quickly arranges a way to overcome that obstacle. One thing leads to another and Selene and Stefan wind up in a mutually agreed-upon and passionate one-night stand. The morning after brings guilt, but not for the obvious reasons. Selene’s realization that the party was attended by guests who then plastered her picture all over the tabloids makes her outraged with Stefan and leads to her flight back to Antaxos, where she correctly fears her father is waiting for her.

Stefan rescues Selene just in time, but once she is safely away she escapes him too, angry that he took advantage of her to get an advantage over her father and fearful she’s traded one uncaring man for another. When Stefan is finally able to convince her that he wasn’t behind the photos and that his rivalry with her father is about more than business, Selene does an about-face and decides to go all-in with Stefan. Stefan has spent his adult life avoiding anything that looks remotely like a relationship, so she has her work cut out for her.

For me, this story is all about the heroine. Oh, Stefan is very appealing and sexy. But Selene is even better. She wants, more than anything else, to be her own person, and you get the sense that as much as she wants Stefan, she won’t compromise what she’s finally achieved to keep him:

He took a deep breath. ‘I realise we have some obstacles to overcome, but it would be much easier to overcome them if I wasn’t worrying about your safety all the time. I want you to come and stay at my villa, at least for a while.’

The temptation was so great it horrified her. ‘No, thanks.’

‘I don’t want you living on your own.’

‘Well, I want it. I’ve lived under my father’s rules for so long I want the freedom to come and go as I please. I can wear what I like. See whoever I like. Be who I want to be.’

She’d thought about nothing else.

‘Myself,’ she said simply. ‘I want to be myself. Not someone else’s version of who they think I should be.’

‘So if I ask you—the real you—out to dinner, will you say yes?’

Selene swallowed, unsettled by how much being this close to him affected her. What scared her most in all this was how badly she lost her judgement around him. She didn’t want to be the sort of woman who lost her mind around a man.

Selene is a classic HP virgin heroine, except she’s not. In this story, the virgin heroine is virgin because that is how her life has unfolded.  When I was reading Sold to the Enemy, I happened to follow a conversation among friends on twitter about how romances commodify virginity. Curious, I searched to see how it was used here. I couldn’t find a use of the words “virginity” or “virgin.” Selen’s virginity is not “taken” from her, and she doesn’t “give” it to Stefan. Yes, it’s her first time, but everyone has a first time. She wants to make love with him, she convinces him she wants it, and the next morning she’s the same person, just one who has had a great night. It’s a passionate, wonderful experience for her, and after she realizes that Stefan is not using her, she coaxes him into continuing where they left off.

I also very much appreciated that each of them has a major, traumatic backstory but they are also their own people, especially in terms of their attraction to each other and how each approaches a relationship with the other. And their histories were truly traumatic. Selene’s father was a not a paper tiger. He was truly awful, a scary, oppressive character, and her scenes with him were quite dark.

There were minor aspects of the novel that didn’t quite work for me. Selene’s mother was important in the early part of the book and then faded off the page; I would have liked to see more of her. I liked that Selene was willing to let Stefan fund her startup business, but putting his employees in the middle of the negotiations was unfair to them. And I don’t think I ever figured out quite what Stefan did to mke his billions. Finally, there were some abrupt shifts in plot and character behavior that could have used smoother transitions. But these niggles didn’t take away from my overall enjoyment.

The Presents line is often criticized for stereotyped, unbelievable plots and characters. But regular category readers know that there are also novels that take familiar elements and make something fresh and interesting out of them. Here we have a rich, handsome hero, a virgin heroine who needs rescuing from an ogre, and a happily ever after they are guaranteed to reach. How refreshing that while Selene can’t entirely rescue herself, she still manages a lot of it on her own, she never loses her desire to become her own person, and she tells the hero that he has to get his act together if he wants to reach that HEA with her. Grade: B+