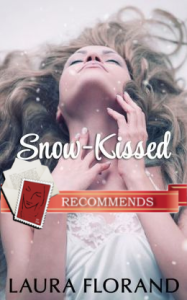 When you offered me this book for review, you warned me that it might be a bit too angsty for me, given my preferences. And Snow-Kissed was definitely an angsty read. But despite that, I found myself engaged by the characters and the story, and I read the novella in one sitting. I can’t say the book worked for me on an emotional level (with one exception), but I thought it was well executed and largely succeeded at what it was trying to do. I liked it enough to recommend it to DA’s readers, but I worried about being able to do it justice in a review given my somewhat cerebral reaction. Luckily, Willaful found that she connected with its emotions, and she suggested we do a joint review with a twist: Introducing our Head/Heart review of Snow-Kissed!

Willaful
Warning: I’m going to take base advantage of writing the “heart” review and let myself get as self-indulgent as I wanna be, starting with my soundtrack for the book. Although it’s set during Christmas, I could not stop thinking of Dar Williams’ “February”:

And February was so long that it lasted into March

And found us walking a path alone together.

You stopped and pointed and you said, “That’s a crocus,”

I tried to remember, but I said, “What’s a flower?”

(A digression: my interpretation of this song was always that the relationship ended, but a youtube comment suggests that it was reborn instead. It turns out that’s the way my husband, the eternal optimist, has always interpreted it. Anyway, that makes it fit the story even better. )

A man paints powdered sugar snow on a woman’s body and licks it off… it sounds like a classic sexy scene from one of the charming “Amour et Chocolat” books. Except this man is in deadly earnest as he melts sugar and tries to melt the ice around his wife’s heart. Kurt and Kai have been separated for over a year, after Kai’s third miscarriage drove her into a grief too intense to be shared, and she left him. Now she’s holed up in a cabin, trying to lose herself in her work as a food stylist, only to find herself snowed in with the one person she can’t bear to be with:

She had so hoped that she had reach a point where she could — see him. Where all that long process of coming to peace with herself and her losses would be strong enough to withstand a glimpse of him. But all of her, every iota of strength and peace, had dissolved into pain and longing the instant she saw him step out of his car, a flake of snow catching on his hair.

Kai has worked hard to turn her overpowering feelings into something calm, “a slushy of grief that lay cold in her middle but no longer spilled out at every wrong movement, every careless glimpse of happy couples of children laughing in a park.” Being frozen hurts less than feeling. But it’s impossible to stay frozen around someone who whose love can cut her so deeply.

Her stomach tightened as if he had just pierced it with some long, strange, beautiful shard of ice. Kurt. Don’t take care of me. You always did that so, so — the ice shard slid slowly through her inner organs, slicing, hurting — well.

Cutting ice, a frozen heart… all clues to the inspiration for this story. The parallels are fairly subtle though (unlike Florand’s The Chocolate Rose, which I thought suffered from sticking too closely to its source.) I wasn’t even sure it was deliberate until I happened to think about Florand’s use of names in previous books — Jolie for the “Beauty” in The Chocolate Rose, Magalie, the heavily guarded Pearl of The Chocolate Kiss, and then it hit me — of course, her name is Kai. Kai, the boy with evil glass in his eye and his heart… no longer able to see what is true and beautiful… saved by the tears of the girl who loved him.

My mom telling me that story is one of my earliest memories, and I’ve always been drawn to adaptations of it (The Snow Queen by Joan Vinge is wonderful) so that might be one of the reasons I fell so hard for this. I’m also pretty much the perfect audience for it: not only do I live for emotional reads, but I’ve shared many experiences with Kai (but have some distance and closure so it’s not too raw) and know how exactly right Florand gets everything. What it’s like to not be able to have the one thing you want more than anything, what it’s like to have your body fail at its most basic task, with reminders of that failure everywhere, what it’s like to have a grief you can’t share with the person whom you love the most. I remember browsing through a book and coming across the phrase, “a miscarriage is the loneliest grief in the world,” and bursting into tears right there in the library stacks.

So I couldn’t help but love this for expressing those emotions so truly and beautifully. (I don’t have quite the same personal connection to Kurt’s point of view, but I felt it was equally honest and moving.) And it caught me in other ways as well. With the stakes so high, the sex scenes have a thrilling intensity:

Her own body didn’t know which would win, his tension or his gentleness. Such a tantalizing knife’s edge. She wanted to fall on both sides.

Oh, but that would cut her right in two. She would never get the pieces of herself back again.

And even amidst the angst there are playful and funny moments and tender sharing and — after all miss, this is Florand — wonderful food.

And most of all, there’s romance at its strongest and most powerful, as Kai discovers how intensely Kurt loves her and how real that love is. Snow-Kissed is obviously about grief and loss and their effects on the spirit, and it’s a beautifully done, insightful portrayal. But at its deepest heart it’s about love, the true, devoted, thick and thin kind of love — not uncritical, slavish adoration, which passes for it in a lot of romance, but love that is honest and clear-sighted, sometimes angry, yet unconditional.

Here’s what my head says about the book: the writing is perhaps overly lush in the first chapter or so — it loosens up as the story arc does — and gets repetitious in the middle section. I was leaning towards a lesser grade because of those issues. And then I got to the ending, the absolutely-perfect-exactly-what-I-needed-ending, and I knew this could only be an A.

The first couple of pages, with their lush, expressive prose, told me I was in for an emotional ride, and I was pretty sure I wasn’t the right reader/reviewer. But despite my instinctive withdrawal from the intense emotional atmosphere, I kept reading, because even though I felt outside the target audience, the book was drawing me in. Kai’s voice was compelling, and when Kurt showed up, I had to read on. It’s an odd sensation to read a romance book from the outside, so to speak, because of all the genres, romance is the one where emotional engagement seems the most important. But I didn’t want to DNF the book, even though I wasn’t entirely sure why.

The food-related scenes and metaphors that set the stage were a little too plentiful for me, but I think that readers who enjoy impassioned atmosphere will find them compelling. Once Kai and Kurt started interacting, I settled into a reading groove. Kurt is very much in the style of Florand’s other heroes, not a copycat of any of his predecessors, but clearly related. The way he controlled and restrained his unhappiness made a great foil for Kai and helped provide balance for me as I read.

And the sex scenes? Oh, they are something. They were uncomfortable to read at times, because you know these two have a long, hard road to even an HFN, and sex between people who love each other but aren’t sure they can be together is so wrenching and bittersweet. I blogged a little while ago about closed-door romances and how I hope they aren’t going away, but this story is Exhibit A for what we missed when those were the norm. I’m not sure that what is communicated in these scenes, and the way the plot and relationship develop, could have been conveyed without them.

The novella is intensely focused on Kai and Kurt, which works well both in terms of the story development and the word count constraints. Kurt’s mother Anne, plays an important off-page role, and I really liked the way Florand integrated her role as mother and mother-in-law. She starts out sounding like Martha Stewart but the context in which her actions take place add an unexpectedly rich dimension to the story and remind us how often intimate tragedies extend beyond the immediate people who go through them.

I said that this was mostly a head-focused reading experience for me, but I also mentioned there was an exception, so here’s the heart part of my review: I haven’t been in either Kai or Kurt’s position, but I know what it’s like to be a couple’s only child by default and bad fortune rather than by choice. Coming at it from that history and experience, many years later, this book really rang true for me. Grade: B+