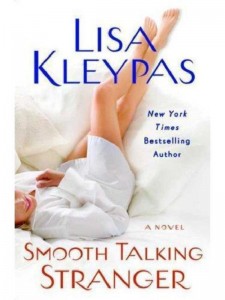 Sometimes I think I’m the only one who didn’t love your first two contemporary romances.I liked Liberty and Hardy, but I became so attached to them that certain things like Hardy’s uneven characterization and Liberty’s choice in men left me dissatisfied. Smooth Talking Stranger was a chance to start anew with two new protagonists.

Ella Varner is a survivor. She was raised by a psychologically abusive woman who possessed not a single ounce of motherly instinct. She did her best to protect herself and her sister Tara, but both were left with emotional scars. After years of therapy, Ella has managed to achieve a tenuous bit of happiness: she’s got a successful job as an advice columnist, a nice place to live in Austin, a great boyfriend, and friends aplenty.

Her life gets shaken up a bit when she receives a phone call one day. Long story short: her sister had a baby, didn’t want to take care of the baby, won’t tell anyone the baby’s father’s name, left baby with the emotionally damaging grandmother, and grandmother refuses to take care of baby. Ella doesn’t exactly want to get involved- she knows little about babies. Plus, her boyfriend runs at the first hint of responsibility so she’s got no help there. However, Ella decides to take Luke for a few days- just until she can track Tara down, and solve the mystery of the baby’s paternity. When Ella discovers that rich playboy Jack Travis may be the dad, she travels to Houston to confront him.

Ella credits her boyfriend Dane with helping her heal from her mother’s psychological and emotional abuse. And while that’s true to some extent, I also think her relationship with Dane was a crutch. Dane was the safe boyfriend. Her heart wasn’t at risk because her heart wasn’t really involved. She lived with him for years, mirroring his causes and interests and beliefs as if they were her own. She became the person that Dane wanted her to be.

With Jack, Ella’s heart is most definitely involved. She knows Jack isn’t going to be the safe boyfriend she’s used to.But unlike Dane, Jack doesn’t want to fit her into some mold.He wants to know the what and the why and the how. He encourages her to become her own person, questioning the beliefs she borrowed from Dane, not allowing her to take herself too seriously, and standing by her side throughout it all.

Jack is an interesting mix. He can be charming, but intense; old fashioned and modern; laid back, but possessive. Many of his scenes were read with a big smile on my face. However, I’ll admit that his knuckle-dragging scenes were some of my favorites.

“Not anymore. You live here. And-‘” A short, gouging pause. “I don’t want you to have sex with him.”

At first I was more bewildered than angry. Jack seemed to have reverted to knuckle-dragging mode, which I had never seen before, certainly not with Dane. That Jack felt possessive, that he wanted a say in when I had sex or whom I had it with, was no less than astonishing. “You don’t get to be part of that decision,” I said.

“I’m not going to stand by while he takes what’s mine.”

Jack’s voice was soft, but it contained a savage note that caused all the hairs on my body to rise. “I’m not playing games. I’m trying to tell you how I feel.

And what about Luke? After all, the premise of the book does center on him. Actually, the scenes with Luke were some of my favorite parts of this story. You can’t help feeling bad for the little guy. His mom doesn’t have any motherly sort of feelings for him- doesn’t even want him, his grandmother would rather give him over to Social Services than take care of him for more than a day, and his dad is some mysterious, responsibility shirking rat. Luckily, he’s got a pretty darn good aunt- an aunt who grows to love him as her own even knowing that their time together is temporary and will come to an end very soon.

Tiptoeing to the side of the crib, I peeked in, expecting to see the baby sleeping. But he was staring up at me in that somber way of his.

“Aren’t you asleep yet, Luke?” I asked softly.

The second he saw me, he moved and kicked, and his mouth curled.

It startled me, that spontaneous reaction to seeing me. And I felt a lovely ache that went right down to my soul, and I forgot everything except that moment. I had earned that smile. I wanted to earn a million more from him.

Ella’s relationship with Luke was very sweet. With Luke, Ella has the opportunity to be the parent that she herself never had. She can ensure that he receives all the love and attention that was missing from her own childhood. Her love for Luke allows her to take a large step in healing from the wounds of neglect and jealousy and humiliation inflicted on her by her own mother. And in caring for Luke, she herself finds a happiness that she never truly had before.

In the end, I didn’t entirely believe that Ella was finished healing. She spent her childhood being told by her mother, among other things, that she was inadequate. So what does she do? She enters into a relationship with Dane and allows him to dictate her beliefs, likes and dislikes. And while her relationships with Jack and Luke have begun the healing process, I’m still convinced that there’s more she needs to work out. There are several scenes towards the end which also point toward this conclusion. These aren’t complaints. I found Ella a very interesting character, and I think it’s realistic that she wouldn’t just be perfectly healed and ready to have her HEA without having to worry about any lingering damage from her crappy childhood.

I was very satisfied with Smooth Talking Stranger.It wasn’t necessarily ground breaking, but it was a very enjoyable and surprisingly poignant contemporary romance.
B+
:) Joonigrrl/Leslie

Borders is offering 30% off this hardcover in conjunction with our Save the Contemporary Campaign.