I love your books. Whether it’s under this pseudonym or Michelle Sagara, I make sure to read them all. It’s true that I find some more satisfying than others but I’ve never actually regretted picking any of them up. Given my growing disenchantment with the fantasy genre as a whole, this is a major point in your favor. So thank you for offering an early look at your latest fantasy novel. I’m sorry I wasn’t able to get to it sooner and it in no way reflects upon the book or your writing. It’s all on me. 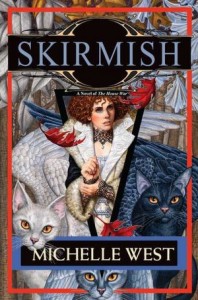 Skirmish is the fourth novel in the House War series, which follows the adventures of Jewel Markess ATerafin, a young woman who spent her early years living in the poorest slums of the capital before being adopted into the most powerful noble house of the empire. You see, Jewel is a seer and at the age of fifteen, she helped avert a demonic invasion. Her ability makes her very valuable.

The first three novels of this series cover Jewel’s life before she was adopted into House Terafin. This novel jumps forward in time to when Jewel is an adult and is a member of the House Council. She has just returned from the Southern kingdom of Annagar and the war that is reaching its climax there. (That story is covered in a previous 6-book series, The Sun Sword, which I highly recommend.) The Terafin’s leader has just been assassinated by demons, casting the house into chaos. In this world, house leadership is not hereditary. The leader earns it — by political savvy, by forming allies, and yes, by murder.

The Terafin was one of the most important people in Jewel’s life. But she also knows what her dead mentor wanted: for Jewel take up the title of Terafin and become the next leader of the House. The only reason why no one else knows this is because the last heir the Terafin chose was assassinated and Jewel is far too valuable to be put in danger like that.

But Jewel doesn’t want to think about games of power and the responsibility of leadership. She just wants three days to bury and mourn for the woman she respected most. Unfortunately, that luxury may not exist. If demons were responsible for the Terafin’s death, then that means others must be around. More importantly, Jewel’s power and abilities have begun to awaken, affecting the lands within Terafin property and beyond.

Given that not only is this the fourth book of a series, which in turn is connected to other series, this is absolutely not the best place to start for a new reader. I wish I could say otherwise, considering how weary of series people can be but I would hate for a reader to pick this up and think it’d work well without any context. It won’t. Along those lines, I’m also not completely sure someone who hasn’t read the Sun Sword series will pick up some of the nuances in this one. So this is a major caveat for new and unfamiliar readers.

All that said, however, I really enjoyed this book. I’ve been waiting a long time to see what happens after the events covered by The Sun Sword and finally, we have it. This is a very political book. While there are clashes with demons, longtime readers know that knock ’em and drag ’em out fights never figure prominently in your books. But even though I love fight scenes, I also love political intrigue. I can see readers who don’t care for that subgenre not being so thrilled with it, but it was very satisfying for me. I especially liked learning more about Haval and his past with Duvari. It makes me even more curious about Jarven. I found all those interactions extremely interesting.

A good chunk of the book is spent exploring the limits of Jewel’s abilities which, as we discover, extend far beyond precognition. It was very fantastical and as a reader who’s getting a little bored with the GRRM brand of gritty, “realistic” fantasy, I enjoyed it quite a bit. I do like a little — or a lot — of magic in my fantasy from time to time and I thought this filled a lack I hadn’t realized I’d been feeling. In addition, the talking cats (a staple of science fiction and fantasy) were hilarious.

I know the book covers a relatively short time period so there probably wasn’t room for it, but I would have liked to see Jewel interact more with the people who had officially declared for the seat. She interacts with Marrick at the end but not so much with the others. This goes back to what I was saying earlier: longtime readers will be familiar with the pre-existing relationships but new readers, or even readers who’ve only read this series and not Sun Sword, will not fully grasp the bad blood involving Rymark and Harraed.

A surprising thing I liked was the relationship between Jewel and Angel. I’d never really gotten a handle on Angel in previous novels and only began to understand him in this series. In Skirmish, we really see his devotion to Jewel and his utter disregard for anything not related to her.

In many ways, this is a book about grief. In the end, the dead don’t care about the actions of the living. They’re dead. How can they care? It’s a loss of innocence for Jewel in many ways but it’s also an important lesson for her to learn, especially if she’s to succeed in gaining control of the House.

I feel like this review is short for a book in which I thought a quite a bit happened, but on the other hand, there’s a lot of spoilers involved too and those events should be uncovered on their own. I admit that after the last book, I was growing impatient for us to move along already and I think many other readers felt the same way. I like to think they’ll be as pleased with this installment as I am. I’m glad we’re back in the present, no longer expanding on the past, and I hope we get to see serious struggles for House control in the next book. B+