I discovered your Dylan Scott mysteries series last fall when Carina Press had a $0.99 sale on a handful of first books in series. Although I’m a fan both of Carina and the mystery genre I’d somehow managed to overlook these. I enjoyed Presumed Dead and went on to the second book, Dead Silent, but then stalled for a while. Wendy the SuperLibrarian’s TBR Challenge seemed a great way to catch up since the fourth book is a novella (January’s theme is novellas and short stories). But I had to read the third full-length novel, Silent Witness, before I could get to it. Long story short, I didn’t get it finished in time to read and review Dead Calm, but Wendy encourages TBR Challenge readers to read outside the lines if they want, and this was definitely in the TBR. So readers, let me tell you about Silent Witness. 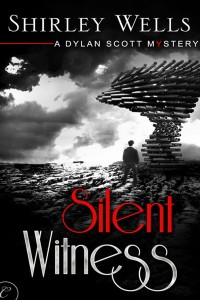 In this installment Dylan has reconciled with his estranged wife, Bev, and he’s back in the family home with Bev, his adored son Luke, and the newest, unexpected addition to the family, baby Freya (Freya is the immediate reason for the reconciliation but there is no doubt that Dylan and Bev loved each other all along). Dylan is shuttling between London and Dawson’s Clough, investigating another small-town Lancashire murder. This time the victim is the ex-wife of the person convicted of killing her, a man named Aleksander Kaminski, and Kaminski’s parents, who are friends of Dylan’s mother, have asked him to investigate because of course they’re convinced that Alek couldn’t have done it.  Dylan isn’t sure he’s going to take the case, but after he talks to Alek; Alek’s current wife Sue; the lead detective on the murder case; and Dylan’s old friend and retired detective Frank, he decides there might well be something there.

All the signs point to Alek, not least because he and Carly, the ex-wife, had been having an affair for years despite both remarrying and Carly becoming the mother of twins. Motherhood is a theme in the book: Bev is suffering from post-partum depression after giving birth to Freya, while Carly and Alek split up because Alek couldn’t have children and Carly was determined to have her own. She married a successful doctor and wound up in a big house with twin boys, but still kept Alek on the side. Meanwhile, Alek married Sue, who devotes herself to her animal rescue center and her husband (her order of preference is a bit ambiguous), and while he likes and admires her, he can’t stay away from Carly. One thing I liked about this setup is that the reader sees what happens when true love and other passions collide. I totally believe that Carly and Alek couldn’t stay away from each other, but the fact that they couldn’t move on created a mess not only for them, but also for many of the people who came into contact with them.

The recurring cast of characters (Dylan’s pot-smoking mother, who provides sympathetic and practical support for Bev, as well as Frank and Luke) make briefer appearances in the past and haven’t changed much, but they play critical roles. Bev’s difficulties with Freya are sensitively handled, and Wells does a good job balancing Dylan’s love and attempts to be supportive with his characteristic obliviousness: he has a much easier time with Freya than Bev does, but he can see that Bev’s frustration is more than new-mother jitters. Not that that stops Dylan from heading north when Freya and Bev are barely home from the hospital, and that’s after missing the birth:

“How’s Bev?” Frank asked. “Is she okay with you coming up here when you should be helping with the new addition?”

“Okay isn’t quite how I’d describe it.” Dylan took a swig of beer. “She hasn’t forgiven me for missing the birth yet so everything I do is wrong at the moment.”

“How come you missed it?” Frank asked.

Dylan had asked himself that same question a dozen times and he still found it hard to answer. “In my defence, Freya was a couple of days early. She was born Wednesday night, when Arsenal were playing Chelsea at home. I had my phone with me, of course, but there’s a lot of noise when Arsenal play Chelsea and I didn’t hear it ring. I came out of the ground, checked my messages and raced to the hospital. It was all done and dusted by that time. The birth was short and quick, and my mother was there to take charge of everything. Bev was in hospital less than forty-eight hours so it’s all okay.”

It’s a testament to the author’s ability to make Dylan a nuanced character that we don’t hate him for the rest of the book just for that.

Dylan’s family shares almost equal time with the murder mystery, so readers who like the personal mixed in with their crime should like this installment quite a bit. Readers who start here will find references to past events and relationship issues, so I wouldn’t recommend it if you want the full backstories of Dylan’s professional and family lives, but the mystery plot is self-contained.

The writing is smoother than in the first two installments (although I noticed a handful of copyediting and proofreading errors), and the mystery is good. There is a large cast of characters but they are all woven into the storyline, and the subplot with Sue’s vet, Jamie, adds depth to the investigation (and extends the theme of family relationships). There are plenty of subtle clues as to who the real killer is, but there’s also misdirection, which I happily followed. And there is no cardboard villain.

This series is getting stronger with every book, and I’m looking forward to having the novella and three more full-length novels to go. Grade: B+