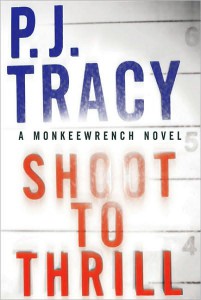 (PJ Tracy is a mother and daughter writing team). As you state in the frontpiece, “South African elephants produce faster” than you two but I never tired of waiting for the next installment of the Monkeewrench team. (Of course I had to google South African elephants to really get the joke and apparently elephants have a 22 month gestation period. I did not know this and I watch a lot of Discovery HD).

I have read the Monkeewrench series a number of times. I think I’ve read the first two at least four times. It is not possible for me to guess whether a reader, new to the series, could come in and enjoy the novel as much as I did. I feel a connection to these characters because I have spent so much time with them. If one didn’t know the history of the crucible in which Grace, in particular, was shaped, I think the reader wouldn’t appreciate the nuances of one of the main storylines or the underlying romance between Grace and Magozzi which was almost so subtle a pencil sketch that even I had a hard time making out the full shape of the relationship.

Shoot to Thrill is a timely thriller as it addresses the confluence of technology and deviant behavior and whether social media and instant internet fame drives people to more heinous acts than could previously be imagined or perhaps pushes people toward deviancy which hadn’t previously been explored.   “The web is normalizing deviant behavior” one character suggests.

But, there are also a lot of people on the cusp-‘disgruntled, twisted, deviant, whatever-‘who might normally never act on their urges in the real world because there's no catalyst to push them to the next level. And some of these types actually understand that what they're feeling is antisocial and wrong. Enter the Web-‘a safe, fantasy forum to communicate with like-minded people. "Hey, Joe, you fantasize about raping and killing women? Me too!' Get a blog with fifty or a hundred or a thousand guys like Joe talking to one another, and you've got yourself a whole new culture with its own morals and code of conduct."

As someone who is a great proponent of technology and the advantages it brings to us, this sort of thing gives me pause and from a reading standpoint, I love that.   It’s something to chew on even after the book is closed.

The FBI sends a liason to work with the Monkeewrench crew, a group of programming geniuses who have been through hell and came out the other side determined to use their skills to help stop criminals. Liason John Smith is six months from a mandatory retirement. He doesn’t want to leave the FBI because the FBI is his entire life.    John Smith lived a life as anonymous and bland as his name, connecting to no one and nothing except for his work.

For long time readers, we are quick to note that John is the ghost of Christmas future for Grace.   Grace is an emotional and psychological wreck.   Having been hunted and almost killed several times in her life, she has tried to cut herself off from the world, walks around fully armed, has multiple locks on her door, and wears knee high leather boots (to prevent her achilles tendons from being cut).   She has an ongoing romance with Detective Leo Magozzi whom she met in Book One, Monkeewrench, but she’s afraid of moving it forward.

Gino Rolseth is Leo’s partner and while he loves the Monkeewrench crew, he’s developing some very ambivalent feelings toward Grace and her cavalier treatment of Magozzi.   This is all complicated when a new woman enters Magozzi’s life in the form of gorgeous FBI profiler, Dr. Chelsea Thomas who makes it clear that she would be open to an advance from Magozzi.

Together Smith, the Monkeewrench crew, and detectives Rolseth and Magozzi work to discover who are the people behind the country-wide connected killing and violence spree that seems based on an internet group’s kill wishlist.

For all the technology that drives the killers, that powers the Monkeewrench crew, this story consciously or unconsciously makes the point that no crime is solved without a little luck and a lot of manpower.   It also serves to drive home the point that people are always hungry for contact that can’t be provided just through bytes and bits. One thing that I really appreciate is the delicacy in which the story is told although I did think the “technology is evil” was overt while the technology is good theme was a lot more subtle, maybe too subtle (Monkeewrench crew provides a lot of technology that helps to solve crimes, for example). And at the end, I swear I would have liked a little less of an ambiguous ending.

Revisiting the characters, agonizing over the slow but crumbling? romance between Magozzi and Grace, reveling in the banter between longtime partners Rolseth and Magozzi, made the nearly four year wait between books worth it but I have a nagging feeling that it won’t be that glorious for newcomers.   And really, it isn’t my favorite Monkeewrench book either so I am going to have to give this a B+.

This is a hardcover from Penguin and thus is subject to pricing by Penguin.   Additionally given that Penguin and Amazon have not come to any agreement, there is no Kindle version.

→ Jane
Previous article: We Are in the Flux Vortex
Next Post: REVIEW: White Cat by Holly Black