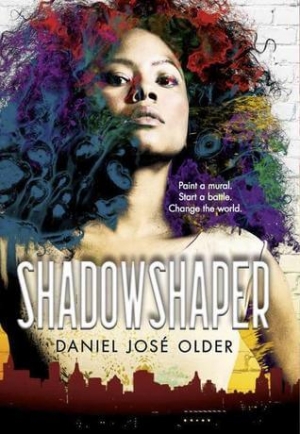 Paint a mural. Start a battle. Change the world.

Sierra Santiago planned an easy summer of making art and hanging out with her friends. But then a corpse crashes the first party of the season. Her stroke-ridden grandfather starts apologizing over and over. And when the murals in her neighborhood begin to weep real tears… Well, something more sinister than the usual Brooklyn ruckus is going on.

With the help of a fellow artist named Robbie, Sierra discovers shadowshaping, a thrilling magic that infuses ancestral spirits into paintings, music, and stories. But someone is killing the shadowshapers one by one — and the killer believes Sierra is hiding their greatest secret. Now she must unravel her family’s past, take down the killer in the present, and save the future of shadowshaping for generations to come.

Full of a joyful, defiant spirit and writing as luscious as a Brooklyn summer night, Shadowshaper introduces a heroine and magic unlike anything else in fantasy fiction, and marks the YA debut of a bold new voice.

I discovered your works when Jia reviewed “Half Resurrection Blues” here at DA. I loved it and am looking forward to the second book, but when I saw that you had a YA novel out with this gorgeous cover I could not one click fast enough.

We meet Sierra when she is trying to finish her mural on the Tower (an unfinished building in the middle of her neighborhood which a lot of residents seem to hate). Sierra is painting a dragon. It is her first mural and she is not sure whether she can do it, but a gentleman by the name of Manny The Domino King convinces her, saying that if her Grandpa Lazaro could still talk in full sentences (he has not be able to since his stroke), he would have wanted her to. I am not sure about her exact age, but I placed her at sixteen or seventeen. Whether this is correct or not I do not know – if the book gives her age, I missed it.

While painting her dragon, Sierra notes that the mural is shedding a tear and many other murals around her are fading. Of course she wants to know what this means. As Sierra tries to figure out the mystery of the murals, she notices that a lot of people around her know things but are not eager to share those things with her. Eventually, however, she discovers the magic of Shadowshaping. I’ll attempt to explain what Shadowshaping is, not a complete explanation but it should give you some idea at least.

“From what Robbie said, the shadows are spirits wandering around and then a shadowshaper comes and gives them a form, yeah?”

“Right.” Juan set out the silverware and got Sierra a glass.

“And the shadow-spirit goes through the shadowshaper into the form, yeah?”

“And then the shadows become more powerful and can do cool stuff and whatever”.

“See, shadowshapers, we work in tandem with spirits. We unify our purposes with theirs, and it’s like a give-and-take, a relationship. When we’re creating, we attract spirits that are like-minded. And then when we shadowshape, they align with us.”

“I mean – it’s an exchange. You give them form, they work for you – with you, ideally, towards your goal, and they know that, so they show up eager to work. But sometimes you might come across some that just wanna be a nuisance jump in whatever form you got for ‘em, and do what they feel. Just ignore ‘em and keep it movin’”.

Sierra discovers why the murals around Brooklyn are fading and what role is she destined to play in bringing them all back. I loved this girl. I thought she was a very real and well–drawn character. I thought she was well suited to the role she had to take upon herself. She really did not have any other choice, or maybe she actually had a choice not to do it, but then she would not have been as admirable of a character to me. I really liked that while the story shows that Sierra is special, the nature of Shadowshaping magic, of her magic, is deeply rooted within the community of which she is a member.

“Without Lucera there is no shadowshaping, but without shadowshaping there’s no Lucera. We are entwined, I drew power from the spirits and spirits workers and I returned it to them tenfold. The true source of shadowshaper magic is in that connection, community Sierra. We are interdependent.”

I thought the story was paced very well. Sierra’s attempts to figure out what was going on, to learn as much as she could while she still had a little bit of time, escalated very nicely, in her first figuring out the mystery and then confronting the villain of the story.

I loved that the book is set in Brooklyn and so many places were familiar to me. When Sierra and her new friend Robbie go places they take the Q train to Church Avenue, and one of the main confrontations of the story takes place at Coney Island. Brooklyn and its people live and breathe from the pages of this book. I also really like that the characters in the book are so diverse. I want more!
Grade: B+