Your debut YA fantasy, Seraphina, set in a world based Renaissance Europe, is both a coming of age story and a tale of a clash between two species. Sixteen year old Seraphina Dombegh, the heroine of the novel, is the child of a human father and a dragon mother. The secret of her maternity is one she must hide at all costs. 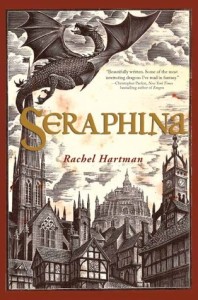 In this world, dragons are a logical, emotionless species, but they can take human shape and while doing so, experience human emotions – something they guard against vigilantly. A truce exists between the two species but there is also a lot of tension and bigotry. Most dragons in Goredd, Seraphina’s country, are required to wear a bell on their shoulder, although scholarly dragons are exempt.

From Seraphina’s narration, we learn that her father Claude had no idea his wife Linn was a dragon until Linn died giving birth to Seraphina. At first glance Seraphina appeared to be a normal human baby, and it was not until she was eleven that she discovered that she is not what she appears to be.

On that same occasion, Seraphina realized that her father’s odd friend Orma is really a dragon, her mother’s younger brother. Seeing Orma in his dragon shape broke open a cache of memories that Seraphina’s mother bequeathed to her. Seraphina passed out and had a vision in which she became her mother as she experienced one of these memories.

A distraught Seraphina returned to consciousness sick and feverish, and dragon scales appeared on her midriff and on her left forearm. Because of the bigotry and oppression dragons face in Goredd, Seraphina always hides her scales under layers of clothes. She is emotional and musically talented, two things dragons are not, so everyone takes her for human. It also helps that most humans and dragons don’t believe a half-human, half-dragon being such as Seraphina can exist.

Now, at age sixteen, Seraphina has become the music mistress in Castle Orison, assistant to the famed composer Viridius. Her father is unhappy about it; Seraphina is a brilliant musician and he is terrified that she will call attention to herself and the truth will come to light.

Seraphina feels isolated and alone with her secret. She does not dare get close to anyone lest that person discover the truth. The closest thing she has to a friend is Orma, and he does not express emotions. More than anything, Seraphina wants a friend, but for her own safety she rebuffs her fellow musicians and anyone else who attempts to befriend her.

Then, just as the treaty between Goredd and the dragons is about to be renewed and the nation awaits the arrival of Ardmagar Comonot, leader of the dragons, for that occasion, Prince Rufus, the queen’s son, is murdered.

Many suspect a dragon is behind the crime, and attacks against dragons increase. Prince Lucian Kiggs, a grandson of the queen and captain of her guard, is charged with investigating the murder. Lucian is illegitimate and was orphaned as a young child. Prince Rufus took him under his wing, so for Lucian, getting to the bottom of the truth is paramount.

An incident in which a dragon is attacked brings Seraphina to Lucian’s notice. He realizes how perceptive she is and begins to rely on her to notice clues. But Seraphina herself is a mystery, and mysteries are irresistible to Lucian. What will happen when he begins to dig into her life in search of answers?

Meanwhile, Seraphina herself has her share of mysteries to contend with. Not just who killed Prince Rufus, but also her mental garden of grotesques, a place peopled with beings whom she visits in her imagination, and who begin to show signs of independent life and thought.

Then there are the memories her mother left her, which Seraphina fears to allow herself to experience. And Orma and her father – are they what they appear to be?

But perhaps the biggest mystery of all is Seraphina herself. Forced to continually lie in order to hide her nature, she has no room to figure out who she is and how to be true to herself. Instead, she feels alienated from her scaly, “monstrous” body, from a mind which contains unwanted memories, from two societies that despise one another and from those who offer her friendship but whom she believes would hate her if they only knew.

Yet as Seraphina begins to accumulate clues to Rufus’ murder, to the garden of grotesques, to Orma, to her father, to her dead mother and to which friendships may be real enough to survive the truth, her alienation from her own body and spirit slowly lessens, and she begins to close the gap between the Seraphina she presents to the world and the Seraphina she is.

Thus, perhaps the biggest pleasure of the book is seeing Seraphina overcome obstacles which include her own dislike of herself, despite the bigotry she must face each and every day.

Seraphina is truly an impressive debut because the novel is strong on so many fronts. The worldbuilding is detailed and fresh, with well thought out cultures both in Goredd and the dragon realm.

There is an intricately plotted mystery which, in an interesting twist, is less about the whodunit question and more focused on the “Where is the killer?” question instead.

The novel’s pace is deliberate and thoughtful, but I wasn’t bored at any point. I’ve seen reviews by readers who felt that it was too slow, but I’m not one of them.

The characters are sometimes surprising and often intriguing, with Seraphina being the most layered of them all. Due to her standoffish aspect I only warmed to her gradually, but I also understood that her distance and deceitfulness were not parts of her nature, but rather, ways in which the prejudices she faced on a daily basis warped her behavior. Her brightness appealed to me and her isolation engendered my sympathy.

At times this book made for uncomfortable reading. Fantasy novels in which the characters must hide their true identity in order to escape persecution can be tough for me, and this book certainly fit that description. Seraphina’s feelings of being alien also reminded me of some experiences I had when I immigrated with my family to the country where I now live as a girl.

Ultimately, though, this was a well-written and rewarding novel. I can’t think of much negative to say about it other than that I guessed one or two plot twists ahead of time. I was reminded a bit of two favorite novels, Shana Abe’s The Smoke Thief, with its poetic language, historic backdrop and dragons who can take human shape, and to a greater degree Kristin Cashore’s Bitterblue, with its intricate plot and mysteries, its themes of oppression, secrets and the search for truth. Both books have an unusual richness, and while this book is as different from them as it is similar, it has that quality too. B+.