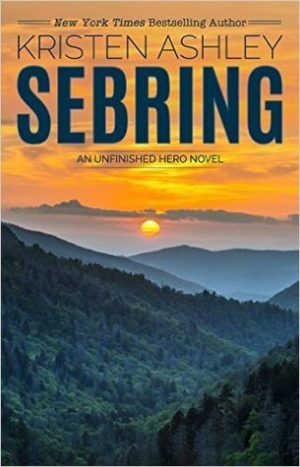 Oh, I was uncertain about this book. We met Nick Sebring in your book, Knight (incidentally, the book that launched my reviewing tenure here at Dear Author). Nick is the brother of the hero of Knight, and in that book he puts his hands on a woman (and not in a good way), and threatens the heroine in a number of ways. In short, he’s a complete and utter douchebag. So, when you announced that his book would be the last of your Unfinished Heroes series, I was dubious, to say the least. But, man, you delivered on every level for me.

When Sebring opens, years have passed since Nick’s mistreatment of Anya, Knight’s woman. He’s been to hell and back. He became a confidential informant for the FBI, and in the course of his involvement with them, became involved with a female agent named Hettie. When he and Hettie are captured by Vincent Shade, a drug kingpin in Denver, Hettie is murdered in front of Nick. Nick got away, and has holed up with his brother, Knight and his family to get his bearings. Needless to say, Nick and Knight have made their peace. He is determined that he’ll get vengeance on Vincent Shade. He’ll bring his entire cartel down and make sure he pays for murdering Hettie. He goes to one of Knight’s associates, Deacon, and asks him to teach him everything he knows.

Four years later, Nick is ready. He’s identified the younger of Vincent Shade’s daughters, Olivia, as his way in. He’ll seduce her, gain information from her, and exact his vengeance. He meets Olivia at a sex club in Denver where he arranges for both of them to watch a scene privately. During the course of the scene, Olivia approaches him, basically nails him to the wall, and leaves without ever speaking a word to him. When he tells her he wants to see her again, she writes her name and number on his palm and walks away.

Olivia Shade knows exactly who Nick Sebring is. She knows he’s related to Knight Sebring and the duo is famous in Denver for keeping their business tight and together. She can’t believe he’d be interested in her, but she decides she’ll take something for herself, for once in her life, and begins having sex with Nick. They rarely speak more than a few words. They have rough sex, fighting for dominance the entire time, and then she leaves. You see, Olivia has been taught early in her life that she cannot begin a relationship with a man who is not sanctioned by her father, and her older sister Georgia, who is the heir apparent and as big a scumbag as her father. She tells no one of her relationship with Nick for fear that he’ll be hurt or even killed. She has the scars to show that she can never love a man who isn’t blessed by her family. So she holds Nick at a distance, never wanting to become involved.

Due to Nick’s constant surveillance of the Shade family’s operations center, he knows Olivia knows some about her father’s empire, but he’s hoping she’ll gain him access to the information he needs to bring down Vincent Shade. But as he and Olivia become more deeply involved, he finds that she is coming to mean as much to him as his vengeance. In fact, he might be in love with her. Will he be able to reconcile his growing feeling for Livvie with his need to bring down her family?

Man, I enjoyed this book! Mostly, I enjoyed getting to know Nick, who I went into the book thinking was a complete jerk, and by the end, was rooting hard for he and Livvie to find their Happily Ever After. I thought the book felt fresh, which is sometimes one of my complaints about your books, they feel repetitive. But not this book. Olivia was smart, and damaged, and wonderfully sweet, once she gave in to her feelings for Nick. And Nick’s reasoning behind keeping his secrets from Olivia were completely credible to me, though I dreaded the moment she found out what he’d been keeping from her. Their relationship evolved sweetly, which was a lovely juxtaposition against the violence that was happening outside of their romance. I will also say, that you are the Queen of Good Epilogues, tying up all of the Unfinished Heroes’ stories in a way that felt satisfying to me. Overall, Sebring is among my favorite entries into this series. I give Sebring a B+.