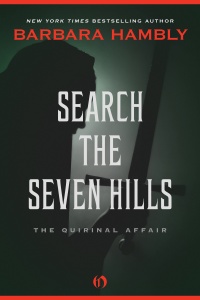 In ancient Rome, a poor philosopher races to rescue his kidnapped lover before she is abused by the sinister Christian cult

The son of a wealthy Roman family, Marcus gave up the prestige and riches that were his birthright to devote himself to philosophy. His noble mind attracted Tullia, a Senator’s daughter whose father wanted her to have nothing to do with the penniless intellectual. The news that she is to marry a prosperous merchant shatters Marcus, who goes to her house, hoping to plead his case, only to see her attacked and abducted by disguised ruffians.

That she was kidnapped is tragedy enough, and it gets worse when he learns who took her: the sinister Christian cult. He knows not what vile rituals they will expose her to, and he does not want to find out. His lover in danger, the philosopher must turn warrior before it is too late.

Why did I pick this novel to try? 1) It’s written by you 2) It’s written by you and 3) it sounded so very different from your other novels in showing how Romans might have viewed the early Christians. The opinion ain’t pretty with Marcus wavering between being appalled and horrified by them while Praetorian guardsman Arrius likens them to “tomcats in a sack.”

The action is a bit slow to get going and I wasn’t at first assured that I wanted to read about Marcus but as the book progressed, he grew on me. He’s not the typical “hero.” Instead he’s a disappointment to his hidebound, ghastly father – imagine being under that man’s thumb with him having the Roman paterfamilias power of life or death over you, an unknown and possibly disappointing helper to a crusty centurion of the Praetorian guard and the person who gooses a happily retired and reclusive general and former Governor of Antioch out of his overgrown city house garden. Together, the three of them are trying to retrieve Marcus’s childhood playmate who has been kidnapped by renegade Christians right before her wedding to an oily Syrian importer/exporter – and you know how *they* are. Or was she?

Arrius is a man with a job to do who isn’t going to let anything – or maybe much – stand in his way. If torture is needed, it will be done. His is the cynical, world weary view of a lawman just doing his job who knows he better get it right or the Higher Ups will hear about it.

Sixtus is a fascinating old coot. Beloved by his slaves, almost forgotten by his neighbors he’s a man who’s seen too much and is haunted by much of what he’s done and seen. But he’s also a man of principles with old school honor.

Marcus is a middle son who was trying to make a go of being a philosopher. Now his search for Truth has turned over the cobblestones of Rome and exposed the dirty underside. He’s getting a rough and tumble education in real life and the seamier side of truth that his delicate ideals might not survive.

The plot takes twists and turns up through the Forum and down the narrow, dirty lanes of Subura. There are bath houses and brothels, lions and letches and liars. Lots and lots of liars though the reasons vary from understandable to reprehensible. I wanted to know what had happened to Tullia, who had taken her and why but at the same time, I didn’t want the book to end since I was having such a wonderful time watching all the characters interact, seeing Roman justice and laughing myself silly whenever 2 or more Christians got together and “discussed” theology. It reminded me of the old chestnut, “I went to a fight and a hockey game broke out.” If the final chapter is a bit too neat and clean, the nail biting finale the precedes it – and the just desserts ultimately served up to the villain – more than make up for it. B+